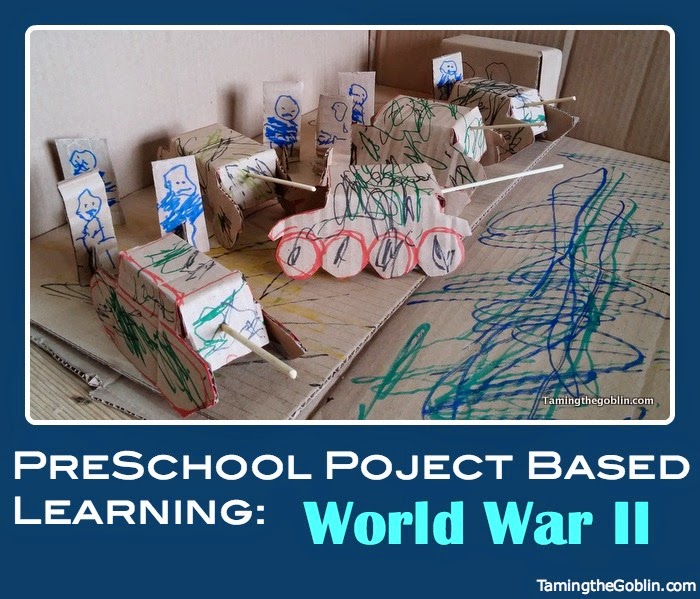 The other day Goblin announced that he wanted to make a model of the D-Day landings. I thought he just meant he wanted to play with his WWII planes and soldiers but when I suggested it he 'tut-tutted' me and explained that he wanted to stick the 'model's onto a scene so we couldn't use his toys as that would be "a waste". 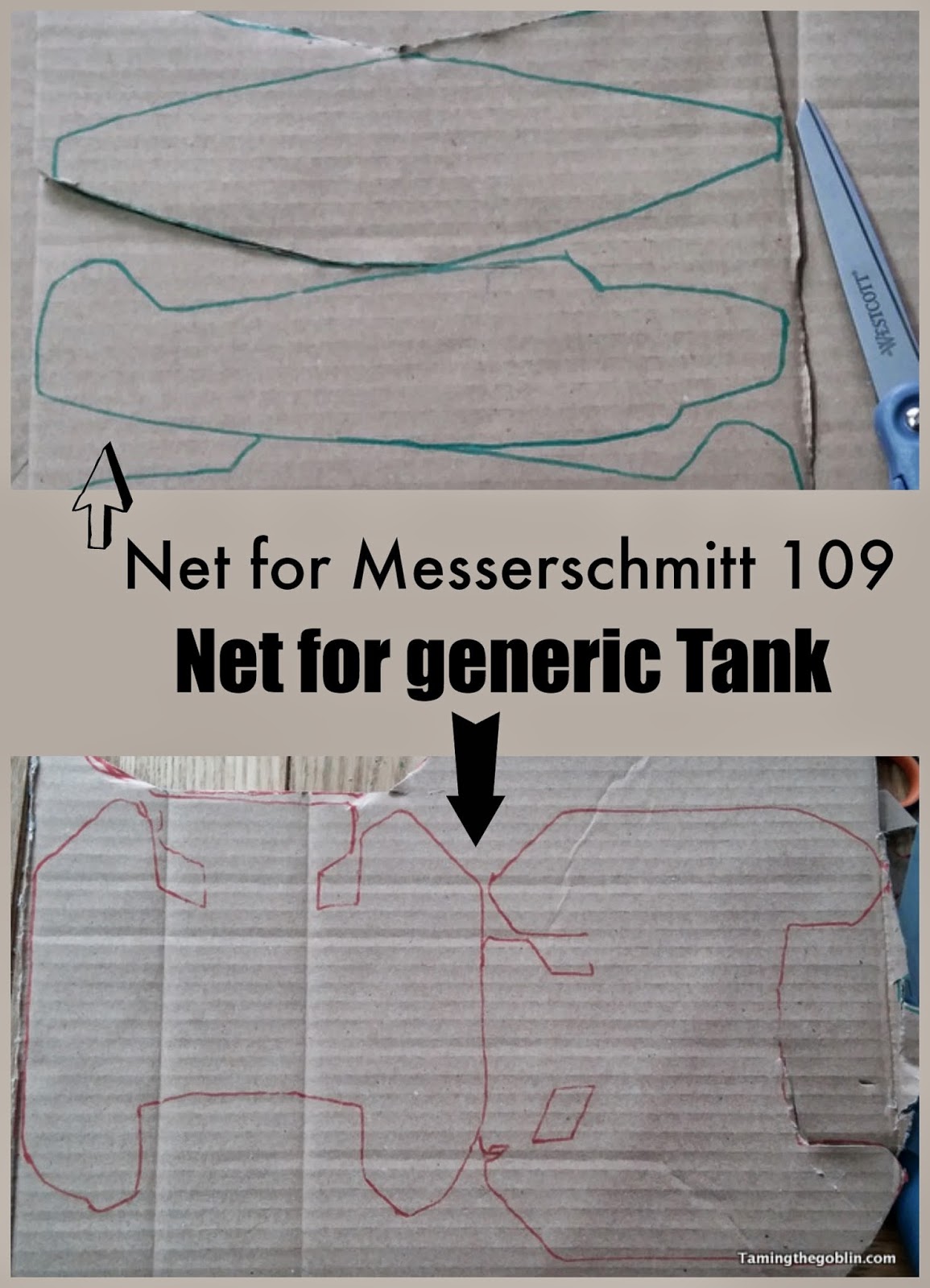 Fortunately we had quite a lot of cardboard kicking about, so following Goblin's instructions I set to work making an array of WWII vehicles. Over the years of working with my son and cardboard, I have come to realise that less is more. He has a great imagination so I don't need to spend ages painting and decorating and making things look accurate. So I did the minimum to depict the vehicles requested. 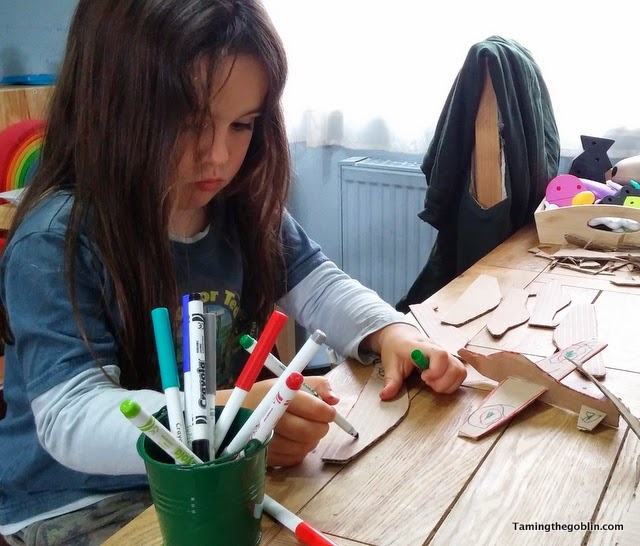 To my surprise Goblin took on the decoration himself. He started by drawing Rondells on the Spitfires and used a double pen hold to scribble camouflage on the tanks. Then he asked me to show him how to draw Swastikas for the Messerschmitts. For a child who doesn't like colouring and feels pressured if you ask him to try and write his name, he sure can draw detail when its something that interests him. I experienced a strange mixture of pride and discomfort when I saw how accurately he'd managed them. Lets just hope he doesn't start drawing them at nursery or we'll have some explaining to do. 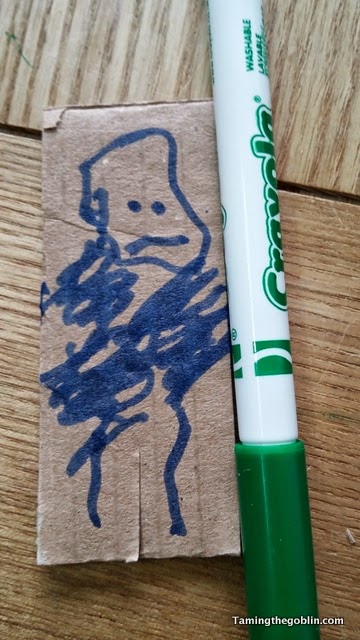 We even got him to draw soldiers. The one above I'm told is Goblin - he wanted to feature in his own diorama. 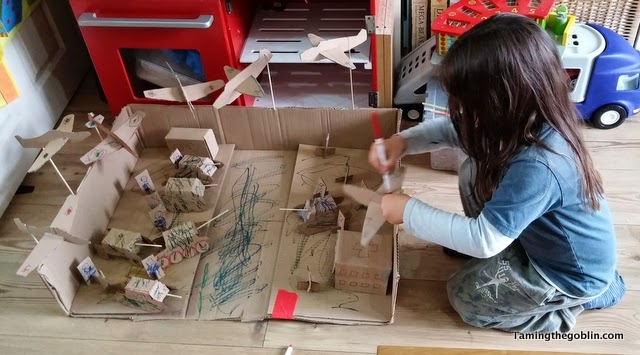 We put all the models together in a big beach and sea scenario with the planes attached to kebab sticks. And Goblin even added some extra detail of planes on fire (on the "baddies" side obviously). 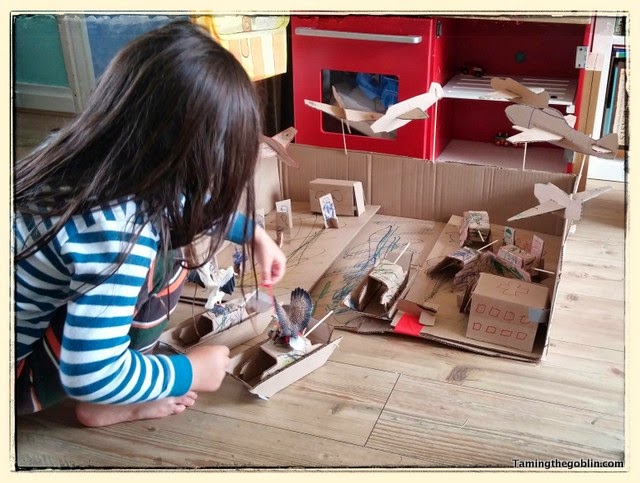 While playing with his diorama he may have reinvented history, in Goblin's version the Allies had a bit of help with their invasion, in the form of birds of prey!

(The two Usborne links above are affiliate links which take you to Amazon. If you purchase products I receive a financial benefit)

Posted by The Monko at 23:11
Email ThisBlogThis!Share to TwitterShare to FacebookShare to Pinterest
Labels: 4 years, art and craft, child led learning, history, toddler craft and painting