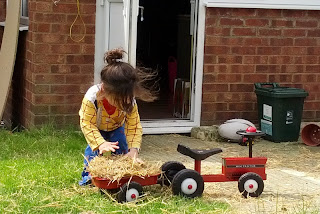 Goblin is really into tractors and farms at the moment. We go to Nature Nursery on a farm and it starts again this week so he is very excited and has been talking about farms non stop. He has also started doing a lot of imaginary play. This weekend he decided to do MESSY imaginary farm play. 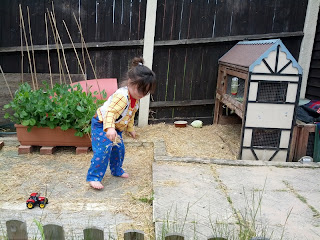 We had a lovely playdate earlier in the week and the kids had emptied the contents of the guineapig's cage all over the floor. I'd given the guineapig most of her straw back but there was still quite a lot lying around. Goblin decided to collect it up, put it in his tractor and "take it to the farm". He was going to give it to the cows. I asked him whether it was for them to eat or to sleep on. He looked confused so we talked about how cows sleep on straw but eat hay. I showed him the difference - we use both with the guineapig. 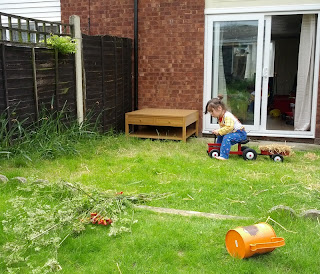 Hublet decided to be a manly man and rake up all the straw that had been scattered over the grass. But Goblin thought that daddy was just making neat piles for him to move to his tractor. Unfortunately Goblin running with straw is like something straight out of the Muppet show. He ran, flailing his arms form side to side and scattering so much straw back on the grass that by the time he reached his tractor he only had a couple of blades left. This happened repeatedly so Hublet's efforts to tidy the garden didn't really succeed. 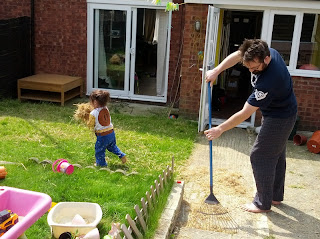 I have to say that playing with straw was a great activity. Its messy but clean and can be raked up (after the play has ceased). Its not something I would have thought to go and buy as a toy for toddlers but it is actually a great sensory experience for them. 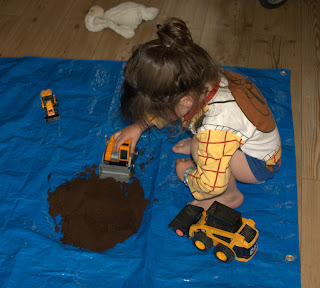 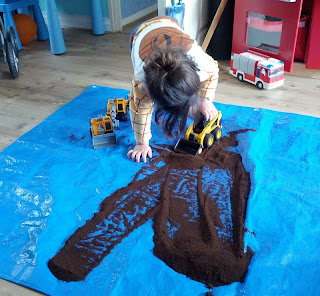 Goblin really enjoyed moving them around with his tractors and diggers - he told me this was a field. Unfortunately the coffee grounds stick to everything. They stuck to his pyjamas (yes he was still wearing them in the afternoon), and all his toys. But the worst thing was the grounds stuck to his feet and when he later came to sit on the sofa he rubbed the grounds into the beige sofa (yes I know its a ridiculous colour to have when you have a toddler but it was really cheap - probably because its a stupid colour). And of course trying to clean coffee grounds off a sofa with a wetwipe makes wet coffee, so then it turns into a coffee stain. AAAAGH! 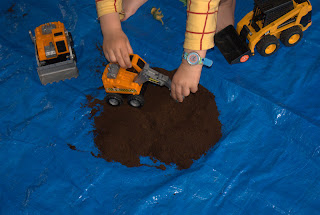 We ended up sticking Goblin in a bath and having to deep clean the sofa. The only upside to the activity was how amazing the house smelt - I recommend this activity if you are trying to sell your house! I will not be playing with coffee grounds again in a hurry (much to Goblin's dismay, he has been asking for them). Maybe we'll do it again but outdoors, it is a ridiculously cheap way to provide a fun sensory material.