Taking it out of the classroom 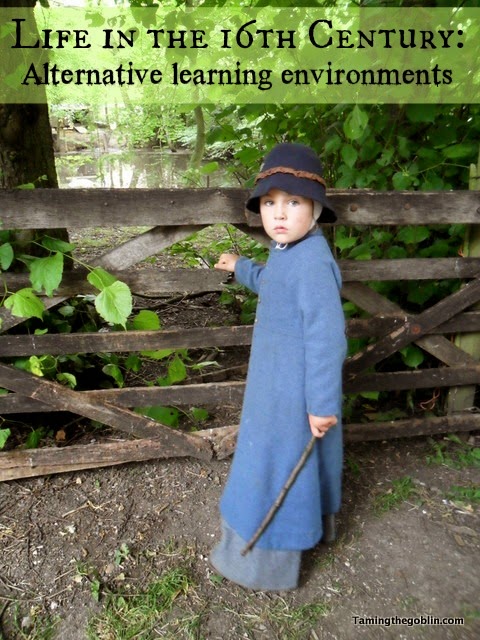 Kentwell hall holds a recreation of Tudor life for two weeks each year, and we take part and play at being Tudors while schools and the public visit. You can read more about it on this blog here, here, and here and on the official Kentwell Hall website here.

Life 'in the 16th Century' offers a lot of freedom for Goblin to develop his own friendships, and make his own choices about how he spends his time. 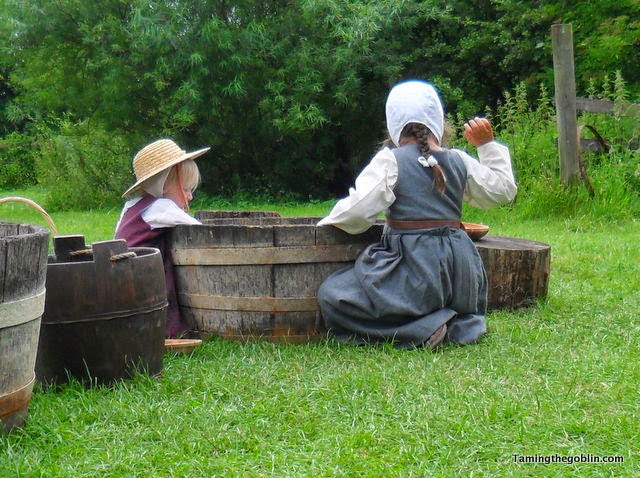 We were sottling on the barn sward (cooking on an open fire for a group of about 100 people) so we needed to work. But we had many eyes watching our son including our extended family (my sister and her husband, and my mother in law) and many friends on the manor who know Goblin and would happily redirect him if he looked like he needed it. We checked on him from time to time if we couldn't hear him playing, but only once did he actually disappeared - untraceable for half an hour because he decided to go into the coppice wood for an adventure but forget to tell us first - anywhere else I would have been beside myself with worry, but on the manor after checking all the standing water, I was only mildly concerned. 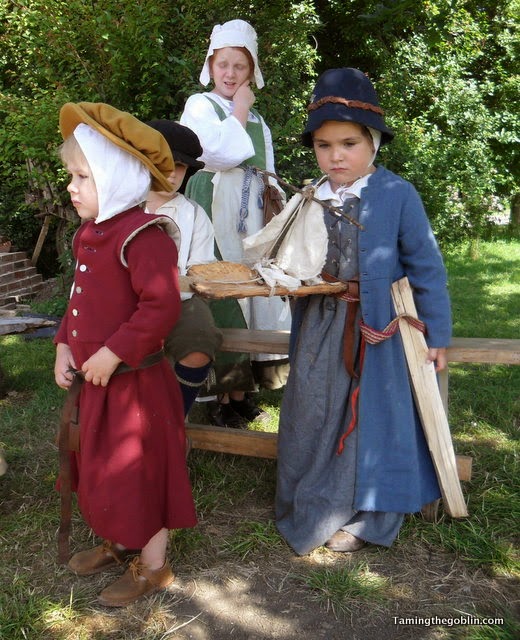 One day Goblin found a polystyrene spitfire plane and played with it in the morning before the manor opened to visitors. He was so obsessed with the plane that he kept trying to talk about it during the day - a strict 'no no' as we mustn't break our 16th century character. So I suggested instead of a plane he referred to it as an eagle. I picked up a pinecone and a bean pod and lashed them together with twine.
"Look Goblin an eagle".
The next thing I knew he had commandeered a group of school children and had them making eagles for him. Some might think that this group of children were there to learn about 16th century living, not make eagles for Goblin. But what they learnt was how resourceful children would have been in the 16th century. They couldn't pop to the shop to buy a toy, they had to make their own entertainment, and that is something Goblin excelled at. 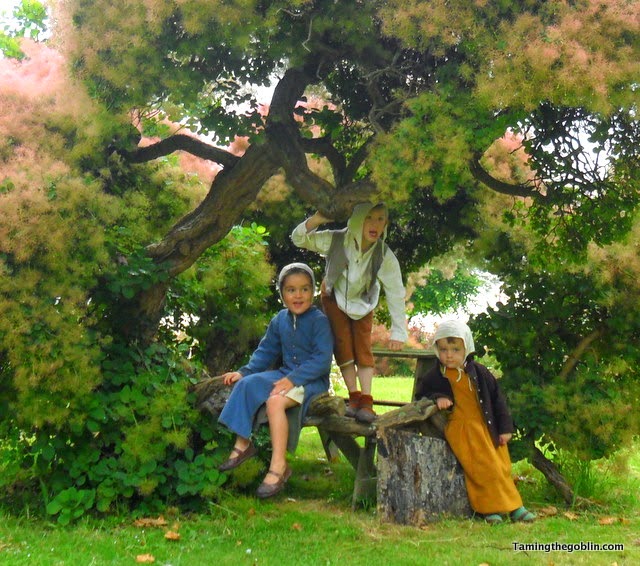 He did take advantage of the opportunity to learn to shoot a bow, practice swordsmanship with the soldiers and play skittles with the children of the barn school. But for the best part of the week he made his own entertainment, whether it was rummaging in the midden, fighting with sticks, building eagle nests with yew tree branches, or herding the sheep. 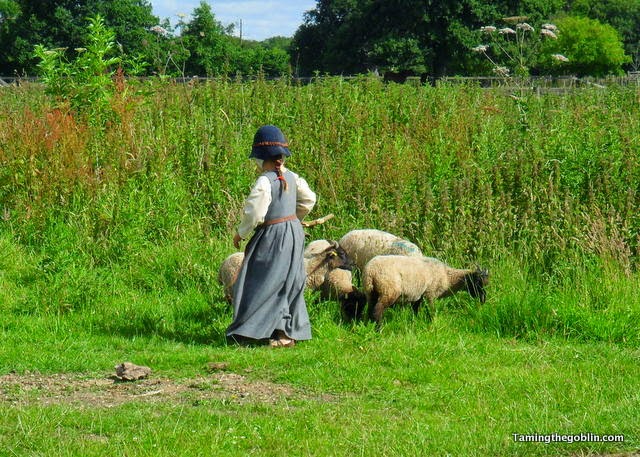 Interestingly Goblin didn't just play all day. He wanted to help us work. He spent a good portion of each morning helping us shell beans, make crumb from yesterday's bread or chop vegetables - he focused on apricots and mushrooms (the softer things he could cut without too much help). Then he'd disappear again when his work was done. 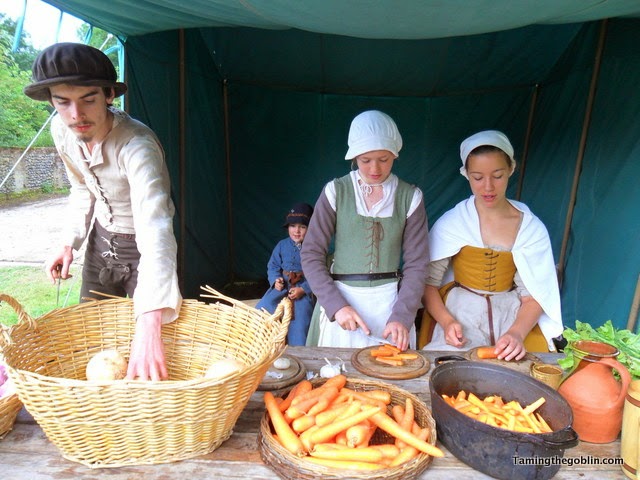 Sometime he'd return when he heard the school parties arriving. As the large school parties of eleven year olds rounded the corner, he would halt them and addressing their teachers ask them to spilt into two groups. His confidence and clarity surprised the teachers who did as this little four year old instructed. He would them take one group and show them how to shell broadbeans, handing out the pods and explaining how to snap off the top and find the thread that runs down the back of the bean. 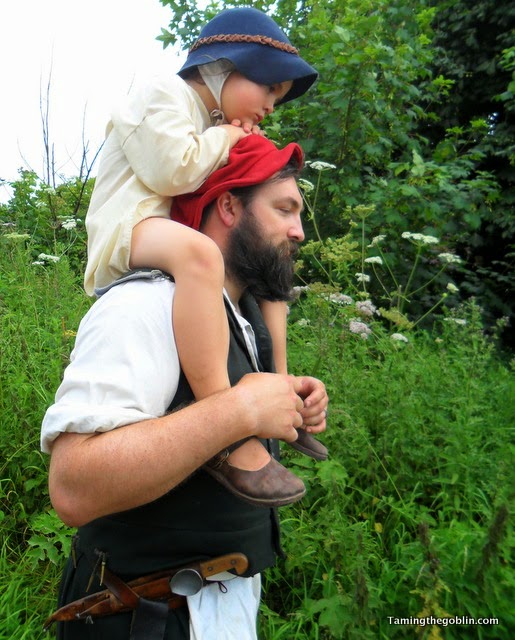 He worked hard and played hard. A week of living and playing outdoors coupled with late nights on the campsite made for a weary little fellow by the end of the week. But his experiences will stay with him long after the smell of woodsmoke has cleared from his hair and a weeks-worth of grime has been scrubbed from his fingernails. I hope we will be able to repeat this adventure next year when we will have to justify to the state why he should be doing this rather than sitting in a classroom. 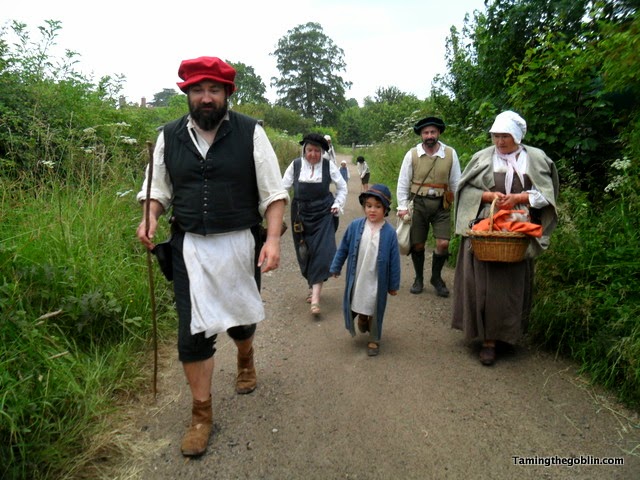 Interesting 16th Century Fact: Goblin's Kentwell name is Creature. Creature of Christ was a common name given to children who were not expected to survive childbirth. A midwife would take hold of any part of the baby from inside the labouring mother and christen them. It was the only time when a child could be christened by someone who was not a priest. This practice was to ensure that babies who died in childbirth were able to go to heaven (and be buried in the church yard cemetery) but many actually survived and kept their name into late childhood.