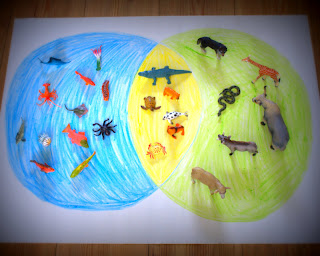 The other day Goblin was playing with his plastic animals and I started talking to him about where they lived, some live in the water and some on the land. My conversation stemmed from a great post I saw ages ago on LivingMontessoriNow which was a round up of various people's units on land, air and water. I decided to avoid talking about animals that lived in the air because no animals actually live in the air. Many spend a lot of time in the air but they all come down to earth to sleep. I also thought that a 2 option conversation was simpler for my 2 and a half year old. But then I realised that there were a bunch of animals that spent a lot of time both in the water and on the land. Should I say these were land animals or water animals? 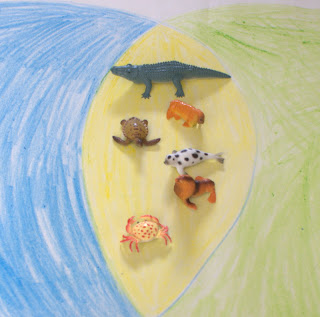 This question stuck with me, and I realised it was a great learning opportunity. So while Goblin was napping I drew him his first Venn diagram. Green is for land, Blue is for water and the yellow middle is where the two over lap.  Our conversation suddenly covered biology/zoology and maths. 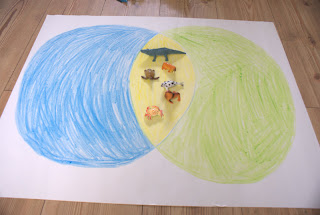 I selected a group of animals that Goblin could easily identify (yes this now includes a sea cucumber - its amazing what kids absorb) and that would fit into one of the three categories. 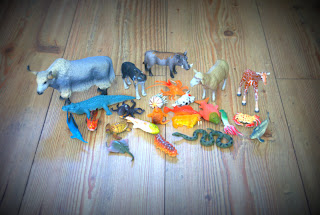 Goblin seemed to enjoy this extension to our earlier conversation. Although he did think it was highly amusing to put land animals in the water and make me do the voices of the drowning creatures - "Help! I'm a giraffe, I live on the land, I know I have a really long neck but this water is too deep, rescue meeeeeee!" 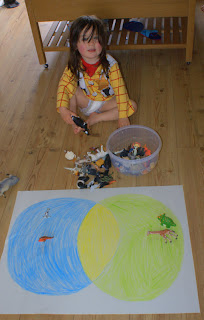 And here is our final diagram with animals in their right places.