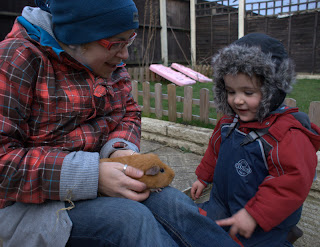 (Goblin is 27 months)
I was feeling a bit guilty today that I failed to take Goblin to the park. He'd been asking to do "running" since lunch but instead we went to the supermarket. So when we got home I turned him loose in the garden. This may sound bad but its actually his favourite place to be. 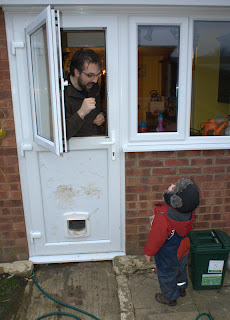 Our garden is a bit sparse, other than the sand pit there isn't any play equipment.  I was worried that Goblin might get bored, but toddlers are amazingly good at creating their own entertainment if you let them. For example Goblin decided to do some mud art using our brand new back door as his canvas. My initial instinct was to tell him to stop, but I suppressed that thought and instead helped him fill a bucket so he could create more mud. Hublet came to view his art work. Goblin likes Hublet lifting him in through the back door window, but he was a bit too muddy for that game today. So instead Hublet played throwing baby marshmallows into Goblin's mouth. Hublet's aim wasn't great and a lot of them went via the floor into Goblin's mouth. We are working on the basis "What doesn't kill us makes us stronger!" 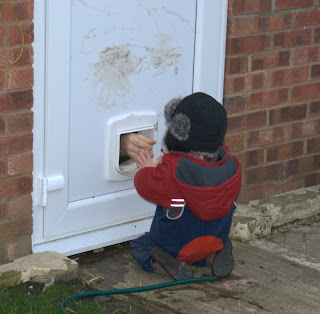 We also played with our guineapig.
Sadly just before Christmas four of my five guieapigs died on the same day. I took one to the vet to see if they could tell me how they had died but they couldn't. It hadn't been cold and there were no marks on the dead pigs to indicate an animal attack. My conclusion was that they had either died of a virus or they had been poisoned by something in the garden. To be on the safe side I dug up the only new plant that I had seen them all eat. I have no idea why my remaining guineapig survived. I have been debating getting her a friend to keep her company but as I don't know what the others died of I am concerned about exposing another pig to the same fate. So for the time being I have one lone piggy. 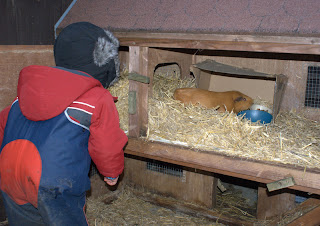 Goblin was never particularly interested in the pigs when I had lots, but now that there is only one he loves looking for her in her cage, and getting me to take her out so he can stroke her. He knows he has to be gentle and that he isn't allowed to get her out of the cage without my help. I do let him hold her when I am present because I think its a good idea to get children used to holding animals. They aren't like dolls or soft toys, they wriggle and because they have claws they can scratch. I have seen much older children drop animals from a height because they were scared/shocked when the animal wriggled or scratched. I want Goblin to understand how to hold an animal safely and securely so that he never endangers them. 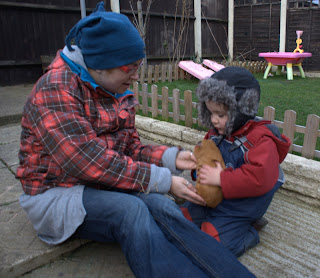 But Goblin is still too young to safely be left alone holding an animal. Its really important for the safety of the animal and the child not to allow children to play with animals until they are old enough to understand how easily they can be hurt. This is an ongoing process and thankfully at the moment Goblin seems reassured by my presence and hasn't shown any desire to try and play with the pig without me there.