(Goblin is 27 months)
I still have a stinking cold and my patience is at zero. Goblin could feel I was grumpy today and he responded by also being grumpy coupled with 'hitty' and 'shouty'. When I am feeling fine I can handle his minor outbursts calmly, but when we are both tired and grumpy we seem to feed each others moods. So when he woke up from his morning nap and instantly bit me and shouted in my face I did not respond in the most serene terms. 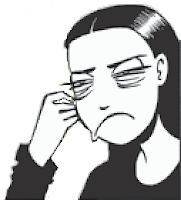 It occurred to me that if we were going to get through the rest of the afternoon without both going nuts I needed to find something to do that involved very little energy on my behalf but would entertain Goblin for as long as possible. Unfortunately it was raining heavily so the park was a no go. I had thought swimming but after I got the bag together Goblin said "no". Normally I'd have taken this with a pinch of salt because he usually enjoys swimming once we get there, but today I was so tired I just couldn't face the slim chance that he'd still be saying no when we got there. So instead we went to a local soft play centre. 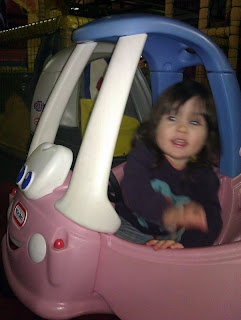 We haven't been since last winter and I wasn't sure whether Goblin would still be interested. When he was younger we went loads. Its such a great place for crawlers and a safe environment for new walkers to experiment with their toddling skills. But now that Goblin moves around very competently I wasn't sure whether there was enough at the centre to keep him entertained. However we stayed for four and a half hours so I think I was worrying about nothing.
I read somewhere that play is a toddler's 'work'. When Goblin is deeply engaged in play he gets a very serious face on - like he is really concentrating on what he is up to. He had that face on for most of this afternoon's session.
A large proportion of his time was spent scooting around in one of these Little Tikes cars. I thought that he might play with other toddlers but he seemed quite happy and absorbed driving around by himself. At one point a slightly older child drove into him and started a game of chase and bump. They both enjoyed it for a while but then the child's mum noticed he was intentionally bumping into Goblin's car and despite the fact they were both consenting, she put a stop to it.  Its funny what we don't see when we are busy worrying about what other parents might think. 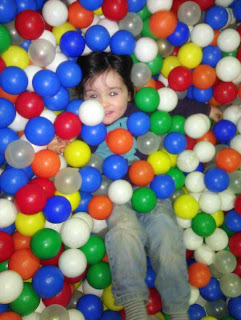 Goblin also spent quite a bit of time in the ball pit. He threw himself in and buried himself completely - I'm always a bit cautious of stepping into big ball pools incase I tread on a buried child. He also enjoyed me throwing him around the pit. 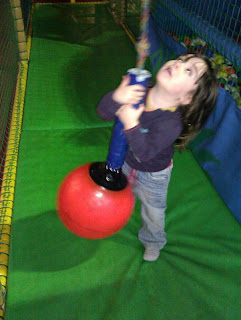 The centre we go to has a designated toddler area which is really great, but because it was quiet (during school hours) I let Goblin explore the bigger kids area. He found a zip slide and insisted on me helping him onto it, pushing him along and letting him fall off. He thought this was hilarious. The great thing about soft play is that he can experiment with falling off a zip line without hurting himself. With all the nasty knocks that a curious toddler gets, it must be nice to have some time experimenting without the accompanying bruises. There are a few little 'rooms' off the toddler area with play kitchen equipment in them. Goblin has started to enjoy imaginary play and he invited me into his kitchen to sit and eat a plastic ball which he cooked for me. 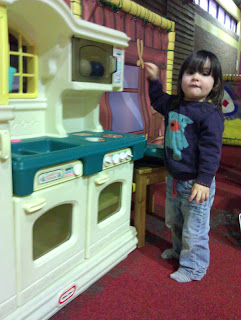 This is him pressing the button on the microwave. When he took the balls out they were 'hot' and he blew on them to cool them down before handing me one. Imaginary food is all very well but with all this play we needed some real sustenance too.The soft play centre is great because most of my job is simply standing nearby for reassurance while Goblin hurtles about. I also get to observe his interactions with other kids - mostly friendly today except for a couple of shoves when kids were trying to play with something he was engrossed in. I did at one point hear myself say "Well now you have stolen his car you better drive away fast so he doesn't catch you" - a useful life lesson?