(Goblin is 26 months old)
The great thing about being with relatives is that Goblin thinks he has tonnes of parents. As soon as his Aunties arrived at Nanny's house on Christmas eve Goblin was off. 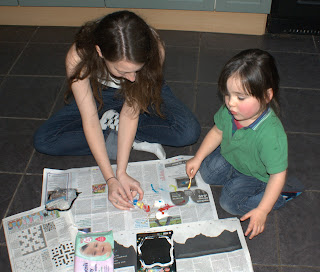 Aunty S had even brought activities. She bravely attempted painting Christmas ornaments with him. He liked painting the paper and his hands too. Poor Aunty S was taken off guard when he tried to escape into the living room with painty hands and his paintbrush but Hublet and I were on standby with wipes and were able to head him off before he painted the furniture (One of the advantages of living with the Goblin 24/7 is being able to predict his crazy desire to touch things when covered in paint).

On Christmas day the relatives came in useful again. Thankfully Goblin slept til 8am - I was expecting a 6 am wake up call. 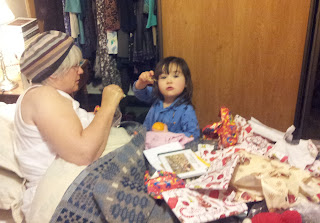 He was happy to open his stocking with Nanny. He was more interested in undoing presents than what the presents actually were. Hublet and I have agreed next year to do a smaller stocking. But most of the presents were things I would have been buying him anyway, crayons, books, home made bunny, R2D2 t-shirt.
Once all the presents were open he went searching for more ... and looking for the Aunties and Uncles.
Poor Aunty M was woken before the sun was up! 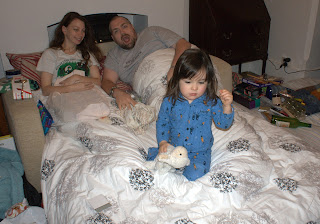 Aunty S was already awake (She loves Christmas). Her and Goblin played with her wind up crab stocking present.When the whole family had been woken by Goblin we opened the main presents. 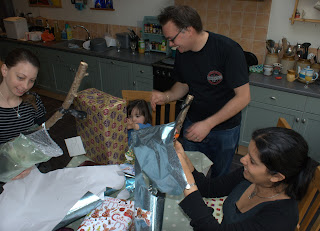 Hublet's family have a fun tradition that instead of buying lavish presents, they have a £10 limit and presents have to fit a theme. Everyone puts two adjectives in a hat. Then you pull two out and those are the two words that all the present you buy must fit into. So everything I gave had to be "sparkly" and "stick like". The Duke had to buy everyone things that were "purple" and "cool" which is why Aunty M got finger puppet purple narwhales! 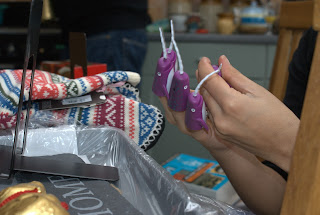 I cheated a bit and didn't apply the categories to Hublet. 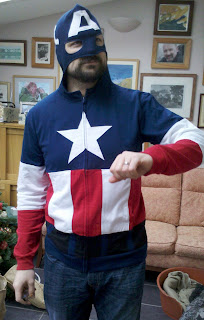 And no-one applied the categories or spending limit to Goblin's presents so he did rather well! 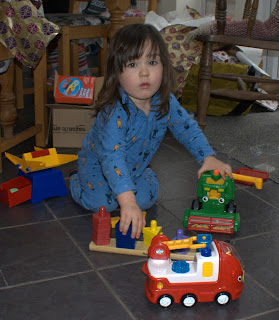 Another great tradition we have is that we all make our own Christmas hats.
This came about because Hublet and his brothers have the most gigantic noggins and none of the hats in Christmas crackers will fit them. I used to open up a Christmas cracker on Christmas eve and extend the hat for Hublet. But crafting your own is so much more fun. 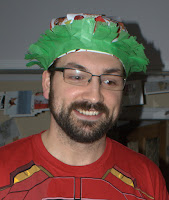 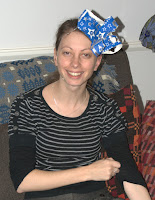 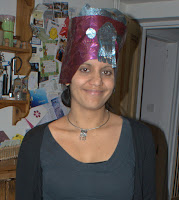 Even Goblin got a hat - he is taking after his Dad with the giant head. I took him to buy a new winter hat the other day and the 3 - 6 year old hats wouldn't fit on his head!
With hats on we all enjoyed a huge feast of pies cooked by the wonderful Hublet. 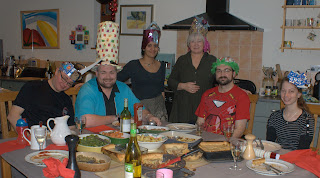 After lunch Goblin decided he would finally take a nap - having completely refused to go down before then. Everyone else followed suit, far too full of food to cope with a toddler. 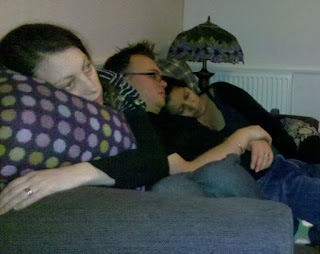 When Goblin finally woke up again the Aunties and Nanny came to the rescue entertaining Goblin with books and playing imaginary trains. 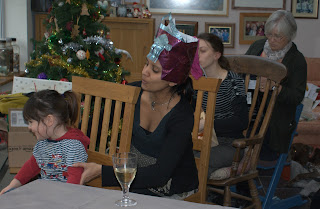 Hublet and I love being parents but its sooooo nice at the holidays to share the effort with others who also care greatly for our little Goblin.

Posted by The Monko at 21:30
Email ThisBlogThis!Share to TwitterShare to FacebookShare to Pinterest
Labels: 26 months, books, Christmas, toddler craft and painting