Its the Sunday Parenting Party. Please link up your Parenting posts and check out what others have linked. Please don;t link Kids activity posts, they can be linked to Kids Co-op. This week I am linking the following:
****** 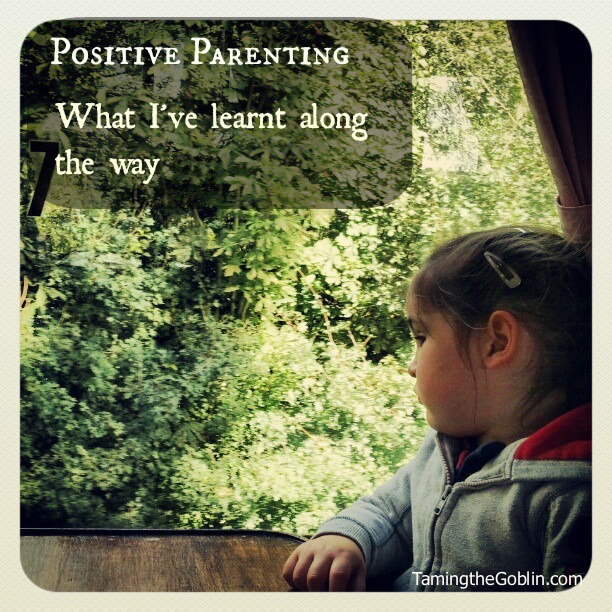 When Goblin was born I assumed we would use the Super Nanny naughty step method of discipline.  It was all the rage and I wasn't aware of any other methods. But after using it once when Goblin was quite young I realised that I didn't like how confrontational it was. The method pits parent against child in a battle of wills. This either teaches a child to be compliant (not a skill I necessarily want for my developing child) or it teaches them to battle and become stubborn (again not something I want to encourage).
So I started to look for alternatives and I discovered Positive Parenting. Positive Parenting has allowed me to develop a loving relationship with my child while laying down clear boundaries and guidelines. I'm no expert and the parenting journey is still very much in its infancy for me. But I thought I'd share some of the things I have picked up that have help me along the way.

Treating the Cause not the Symptom
Acting badly or in a way that parents don't like, is a symptom of something deeper. Sometimes when your kid does something naughty it feels like they have done it on purpose to make you angry. But that is not likely to be the case. There are times when Goblin does something that he knows he shouldn't do and I find myself wondering whether he did it just to get a rise out of me.
It would be easy just to apply discipline methods to the symptom, the action that made you angry. But if you look deeper at why they did it you can often treat the cause and that will be more effective at stopping the behaviour for longer.
Firstly do they know that what they did was something they shouldn't have done? If the answer is a definite yes then the question is why? Key deeper triggers for Goblin are fatigue or hunger. So if he starts getting a bit agressive or troublesome my first question to myself is always when did he last nap and when did he last eat. Sometime a child will not be able to put into words why they are acting out. In fact they may not even be able to associate their underlying need with their action so its up to us to guess. As well as hunger and fatigue, fear, frustration, confusion, sadness or illness are all triggers for 'bad' behaviour.

Modelling good behaviour
If you want a child to act nicely you have to model it yourself. My new years resolution is to be less shouty. This came about when Goblin started mirroring my bad behaviour. When I got cross I'd yell at him, and you know what, he'd yell back. Why did this surprise me? I was teaching him a pattern of what to do when he got frustrated.
Similar behaviours that need to be kept in check are snatching something off your child if they have snatched it from another child; Being sarcastic; Calling your child names (even basics like stupid or naughty).

Redirecting
Redirecting was a revelation to me. Rather than just saying No, you tell them what they can do instead. Kids often don't know what they are allowed to do instead, or they can't come up with something for themselves. For example if your child is throwing building blocks you could say "I will not allow you to throw building blocks inside because they could hurt someone, but here are some soft toys, why don't you try and throw them and see if you can get them in the basket". Goblin's favourite "annoyance activity" used to be pulling DVDs out of the shelves. So a redirect could be finding an alternative game or providing a shelf for him with empty DVD boxes that he can pull from "You can not pull the DVDs off these shelves but here is a shelf just for you where you can". Redirection isn't a one off. You can't redirect your child once and think they will never do the action again. Its a continuos effort until they  either get bored or learn that the alternative is what is acceptable.

Giving choices and options
Wherever possible I try to give choices. This is particularly useful in helping with transition from  one activity to another. If Goblin is watching TV and I need to go to the shops I will offer alternatives. "Do you want 5 more minutes of TV and then go in the buggy to the shops or do you want to go now and walk?" Both choices still involve going to the shops but you empower your small person to have input into the activity. It also teaches your child how to negotiate.

Using natural consequences
Natural consequences is a method I struggle with. Its really hard sometimes to come up with an appropriate consequence for an action on the spot. But where you can find an appropriate consequence this can be an effective discipline tool. One good one I found in a restaurant was "Goblin you need to sit on your chair, if you get down from your chair I will put you in a high chair". I usually then give him the option of changing back to a big chair for dessert if he has sat nicely. The important thing with natural consequences is to follow through and not use them as empty threats. To do this you need to choose consequences you are willing to follow through on. So I will use the consequence of going home if Goblin isn't able to play nicely in the park, but only at the end of the trip when he is getting tired and we'd be going home anyway. Earlier in the trip I might use the consequence of having to sit on the bench with me and watch for 5 minutes if he is unable to play nicely (or just redirect him to a different apparatus).

Respecting a child's feelings
Its common practice to negate a child's feelings, we often do it without even thinking. A child falls over and bursts into tears, we'll often say "Oh don't cry it was only a bump". This does two things, it tells them its not OK to have the emotion they are having and it tells them that they shouldn't trust their own feelings.
So I try to respect Goblin's feelings even when it concerns me. If he says he's not cold I don't force him to wear a jumper even if its really cold outside. I have to trust that he will recognise the temperature at which he feels cold and at that point he'll ask for a jumper.
Likewise when he is having a tantrum I avoid the temptation of trying to shut it down. Instead I try and empathise. "I know you wanted that toy car and I said no and that must have made you sad". This often enables me to open a dialogue with Goblin that can then defuse the tantrum.
The only feeling which I do override is fatigue. I think all humans are programmed to fight sleep, and Goblin is no different. He will adamantly state that he is not tired as his eyelids droop lower and lower. So with this one I do tend to say "I hear that you aren't tired but I'd like you to try and have a lie down anyway. Its OK if you don't sleep". Two seconds later he is usually snoozing.

The Positive Parenting approach is attractive to me because it is a holistic approach. It doesn't just deal with the symptom of bad behaviour. And its flexible. Just because yesterday I said no to something doesn't mean that's a rule set in stone, because the approach isn't about being authoritative so I'm not going to lose face if I change my mind. I am attracted to this method because it helps me gently steer my lovely son in a positive direction without creating battles neither of us can win.

Posted by The Monko at 21:00
Email ThisBlogThis!Share to TwitterShare to FacebookShare to Pinterest
Labels: 39 months, parenting, The Sunday Parenting Party