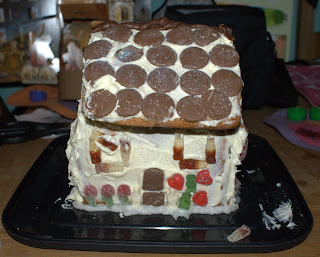 We never did gingerbread houses for Christmas when I was young. But this year I thought I'd make one with Goblin. Some of my friends had mentioned kits you can buy - but I thought "how difficult can it be?" ...... well actually VERY DIFFICULT! 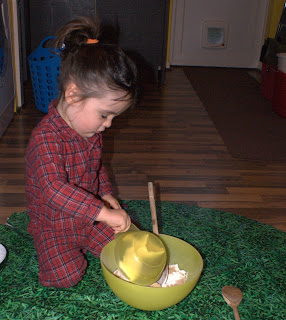 Making the gingerbread was fine - well sort of! Goblin was very good at mixing and adding the ingredients. kneading, and rolling. Even cutting triangles and squares - he did most of the cutting and I neatened the edges. 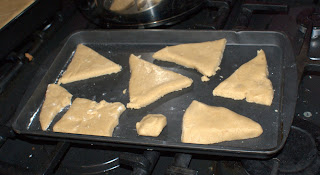 But then while they were in the oven and Goblin was 'washing his hands', I remembered that I had forgotten to add an egg! OH NO, NO EGG. But actually the forgotten egg wasn't too bad. It just made the biscuits taste more sugary (which is never a bad thing). 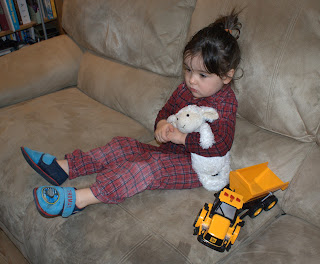 Poor tired (and wet) Goblin sat and watched "Lots and Lots of Fire Trucks" while the biscuits cooled. 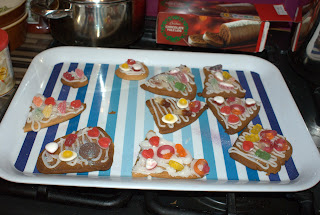 After his nap we decorated the biscuits. Hublet and I put the icing on (because the tube was really stiff and Goblin couldn't squeeze the icing out - yes I was lazy and used ready made icing), and Goblin decorated them with Haribo and chocolate buttons. It went something like, one for the biscuits and two for me, one for the biscuit and the rest of the packet for me. I decorated the house sides - I covered the biscuit in butter icing and then added jelly sweets and chocolate buttons. Goblin helped me add chocolate buttons to the two roof biscuits.
So all of this was fine, and other than 'egg-gate' the component parts were made with very little hassle at all. But then it came to the construction. Why had I thought that icing would hold very heavy gingerbread laden with butter icing and chocolate buttons up when only half a centimetre of edge was touching? Needless to say I quickly discovered that icing is not superglue. 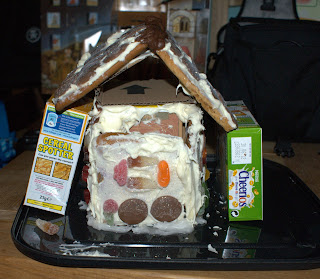 In the end I had to cheat and put three mini cereal boxes in the middle and Hublet made me a cardboard triangular to go on top to hold the roof up. I covered the lot in icing and stuck the gingerbread to the boxes. I managed to take the 'support boxes' out from under the roof for long enough to take a photo but I suspect that my little house may not make stand up all the way through to Christmas. 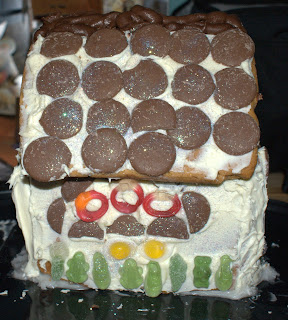 Posted by The Monko at 21:33
Email ThisBlogThis!Share to TwitterShare to FacebookShare to Pinterest
Labels: 26 months, Christmas, cooking, Mummy's crafts