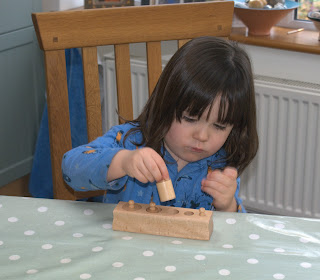 Yesterday was quite a busy full on day with lots of relatives and family friends dropping by and Goblin was in a whirl wind of excitement at meeting people and running around. I decided that such an atmosphere wasn't conducive to introducing Goblin to some of his more educational christmas presents. 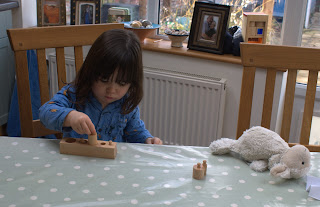 But Boxing day was much calmer. So in the morning I got out the two more basic of the four mini knob cylinders I'd bought him. I hadn't been sure about buying the mini ones rather than the proper size ones, but actually for Goblin's little hands they were perfect. I was really pleased that he was so interested in them. And I was intrigued that he worked out so quickly how to put the size sequenced cylinders in the right holes. 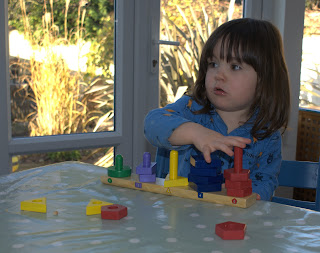 As well as his montessori knob cylinders he'd been given a Melissa and Doug stack and sorter. Nanny and I watched in utter amazement as he tried it out for the first time and with no prompting or presentation he took the mixed up shapes and put every single one on the correct coloured peg. And as he did it he named the shapes (except the pentagon's which he didn't know). His success with this toy did make me realise why Montessori methods separate out colour, shape and numbers in their learning equipment. Goblin was using his ability to colour match rather than counting or shape recognition to get the shapes on the right posts. I was still really impressed though.