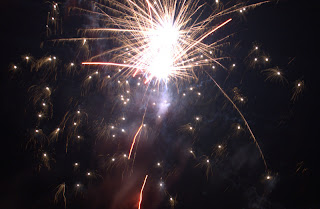 Yesterday was Bonfire night and we went with friends to a brilliant fireworks display. We decided to take the baby backpack rather than the buggy because it's easier to get through crowds. 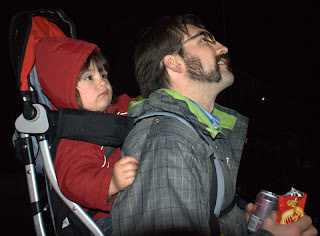 Goblin likes the backpack and was quite chilled out at the beginning of the evening. He was excited by the big bonfire, and enjoyed being fed chips by the gang. When the fireworks first started up he looked somewhat alarmed and turned to me saying "home now, home". But after a bit of reassuring and once he saw that everyone was smiling and happy and not at all worried, he settled into watching the bright lights and seemed to forget the screeches and bangs that accompanied them. 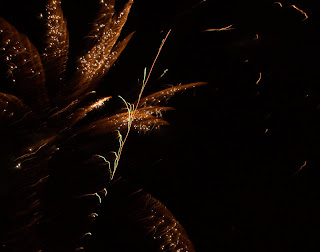 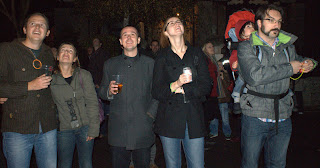 After the display we retrieved Dinky H from the pub - she really doesn't like fireworks and bolted about halfway through the display. In all fairness, knowing she was not a fireworks fan it was very brave of her to come at all. We all retreated to Nanny's house and Goblin got to stay up very late and play with the big boys. The boys discovered that you could pick up stuff with the duplo cranes, and instigated a game of "crane wars". Goblin was the independent adjudicator. It was fascinating (and hilarious) to watch how men play. 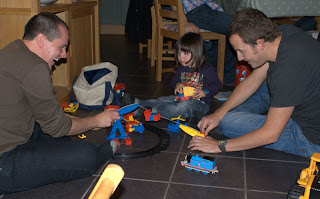 Even after they discovered that the blue crane was obviously a bit faulty and always lost the battle, they continued to play - using the same two cranes - for about half an hour. And when Goblin got a turn he was given the faulty crane .... 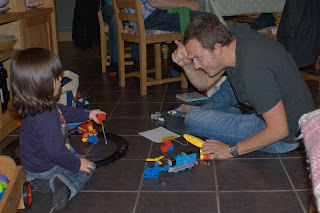 ...and mocked for losing. Yes this is my friend making the "Loser" sign to my 2 year old son.
Lesson for Goblin?