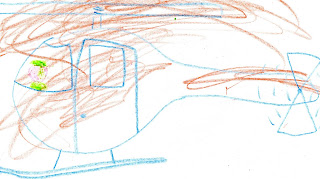 This morning Goblin and I had fun colouring with crayons. As you know Goblin is obsessed with vehicles, so he wanted me to draw some. He told me what he wanted, I drew it and he coloured it in. As I was drawing he would carry on shouting what it was he wanted me to draw until it started to emerge. 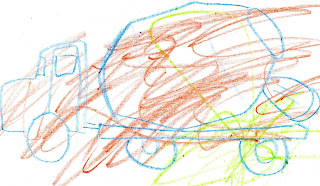 One thing I was really pleased about was how much of the picture he was covering with colour. When he was younger he'd colour but he'd only cover small amounts of the paper, even if there was a pre-drawn picture. But today he was really trying to cover the whole area. 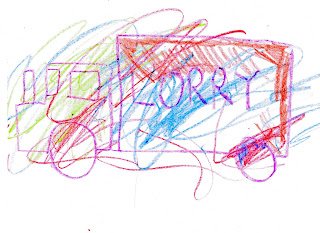 (I did the red on the back of the lorry).
We did some painting too. Goblin ripped up some tissue paper and we added it to the pictures. He really enjoyed having has hands painted with a paintbrush, and then he did some lovely hand prints. Then he decided he needed to do the same with the glue. 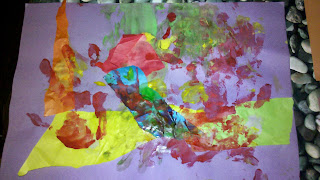 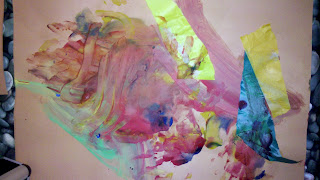 Fortunately when this activity came to a natural end Goblin was more than willing to jump in the shower and wash all the glue off.

Posted by The Monko at 21:37
Email ThisBlogThis!Share to TwitterShare to FacebookShare to Pinterest
Labels: 23 months, toddler craft and painting, vehicles