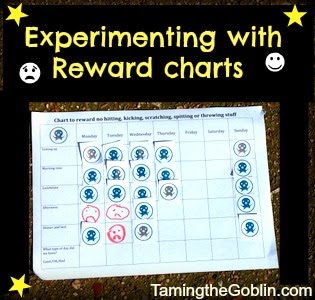 Hublet and I general find the philosophy of Positive Parenting resonates with us. As a result I have steered clear of many of the Super Nanny methods which tend to be more 'behaviour modification' techniques. I have never tried reward charts because they felt a bit like kiddy training but recently I have had to completely rethink my attitude to reward charts and behaviour modification.

I'm quite sold on the Positive Parenting idea that consequences should be natural and therefore linked as closely as possible to the specific action. This is easy if the action is throwing your toy on the floor and the consequence is that the toy breaks and gets put in the bin. But its much harder when the action is hitting your parents. What is the natural consequence to that?

In the real world hitting someone usually has a natural consequence of being arrested or being hit back. Goblin has certainly been experiencing some natural consequences of Mummy and Daddy getting seriously pissed off and screaming at him not to hit because it hurts. But that doesn't seem like a satisfactory consequence and certainly doesn't fit with the idea of being 'respectful' to your child and trying to be calm and loving - concepts I find extremely difficult to muster when I have been headbutted across the bridge of the nose for suggesting we should put our shoes on.
Goblin is quite delightful when he is doing what he wants, but has been struggling with responding to things he doesn't want to do. Any request that doesn't fit with his desires is currently met with either throwing something (often something delicate like the computer mouse or my phone) or kicking, hitting, headbutting, scratching, biting etc often accompanied by growling.

We have tried to stay calm and explain that hitting hurts, we have tried to be respectful and step out of his way while acknowledging his feelings, we have tried carrying him to his room to keep him away from all the breakable stuff and give him time to calm down, and we have tried screaming loudly in his face that he is being horrible (yeah OK I knew that one wouldn't work but I'm only human). Sometimes these actions work at stopping the violence for that particular moment, but they haven't done anything to break the habit of resorting to violence at the drop of a hat.

I wanted to find something that would help to change his behaviour. A lot of the positive parenting blogs say that you shouldn't try and control your child's behaviour and that parenting isn't about training your child. But I am fed up of being hit, so I am choosing behaviour modification to allow our relationship to get back on track.

I asked on Taming the Goblin's FB page whether people had had any success with reward charts. There were some positive responses, some saying yes indeed and others saying they'd faired better with pebble jars than reward charts, some also said their child wouldn't fall for manipulation by stickers (I held out hope that mine would). I guess it depends what your child will relate to. 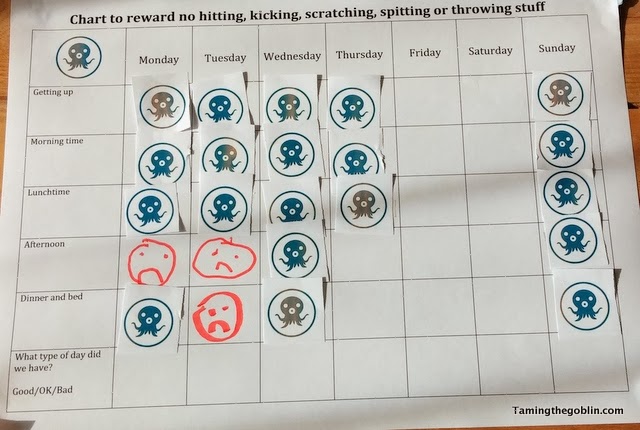 After much discussion between myself and Hublet about whether we were doing the right thing and how the process would actually work and what behaviour we were trying to tackle, I set to work to draw up a chart. It has the days of the week in columns and each day is split into sections. Each section captured a transition period - these are the times that most often cause Goblin's behaviour to deteriorate. As he is octonaut obsessed I printed little octoalerts and used double sided tape on the back. If he makes it through a period without violence towards myself or Hublet he gets an octoalert and if he makes it through a whole day without violence he gets to watch one episode of octonauts on TV.

We chose screen time as his reward for two reasons, firstly we are trying to reduce his screen time and this way he has to earn the screen time with good behaviour (or at least non violent behaviour). Secondly he loves octonauts so we are hoping that will act as an incentive to behave well.

So far we have had mixed success, but although he hasn't managed many whole days, and thus hasn't earned much screen time, his outbursts have reduced significantly. He has also looked at the chart and asked "Why did I get that sad face". When I reminded him, "that was on Monday afternoon when you hit Daddy", he has looked genuinely remorseful and said, "Oh yes, Sorry". So the chart is helping him reflect on previous behaviour in a way that he hasn't before.

As I said earlier I always thought that rewards charts were a bit of a blunt instrument but I have discovered that they can be much more subtle. I realised that not only are they acting on Goblin's behaviour, they are also changing the way Hublet and I are parenting. Because we both want him to succeed and win his octoalerts, we have been more cautious not to goad him into situations that will result in him lashing out. We have stepped back and reminded him of the chart and given him space to make the right decision where we might previously have kept nagging until he exploded. This has been an interesting and unexpected impact of 'the chart'.
Goblin has also insisted that I get a chart to deal with my bad behaviour - my yelling. This only seems fair.

I'm not saying that the chart is a roaring success, its too early to tell. And I'm not saying we will do this forever, in fact I'm hoping we won't. What I'd like is for this to act as a catalyst to break the habitual behaviour and give him an incentive to find alternative ways to deal with his frustration. Once he has settled on a less violent way of dealing with life's upsets I hope I will be able to drop the chart and we can regain some normality. That's the plan. lets see if it works. Wish us luck!

Good reads from last week include
Finding Me time as a Mum ~ Cuddles and Muddles
Sometimes I feel like an awesome Mom ~ What's up Fagans
Thoughts on Child Discipline ~ In the Playroom
Welcome to The Sunday Parenting Party, hosted by Dirt and Boogers, Play Activities, Crayon Freckles, Taming the Goblin, The Golden Gleam, Prickly Mom, and The Tao of Poop. The SPP is place for readers to find ideas on nurturing, educating, and caring for children, as well as honest posts about the stresses of being a parent or caregiver. Links to reviews and giveaways are welcome as long as they are relevant to the topic. All parenting philosophies are welcome with one exception: please do not link to posts promoting physical discipline, as this is something we would feel uncomfortable having on our blogs. (P.S. By linking up you agree that your post and photos are Pinterest, Sulia, G+ and FB friendly. We will be showcasing ideas on The Sunday Parenting Party Pinterest board.)

Posted by The Monko at 19:00
Email ThisBlogThis!Share to TwitterShare to FacebookShare to Pinterest
Labels: 4 years, parenting, The Sunday Parenting Party