Learning by Living in History

(Goblin is 44 months)
So we've been MIA for a while. That's because we were on holiday, being Tudors at a historical re-enactment at Kentwell hall. Instead of telling you about the manor I'm going to tell you what our three and a half year old got out of living in the 16th century for a week. 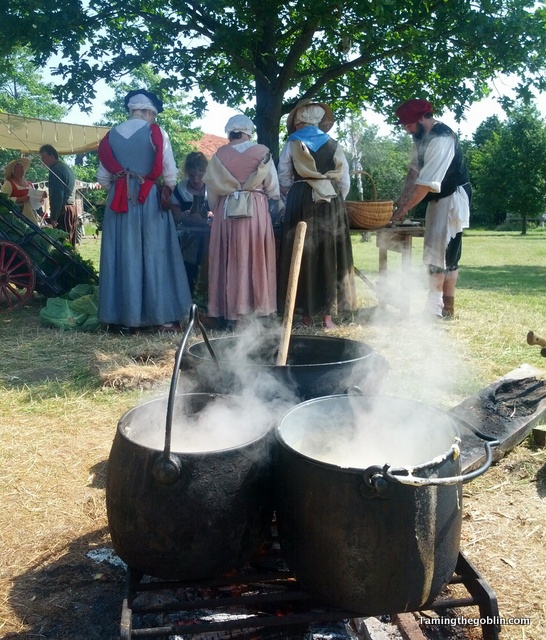 Going to Kentwell was a working holiday for us all. We were Sotlers and along with some other lovely folk we had to cook pottage for 150 people (the other re-enactors on the manor) every day. Unlike some stations that don't need to be active until the public and school parties arrive, Sotling requires an earlier start because the fire has to be lit. Fortunately Goblin was our alarm clock, not sleeping beyond 7am despite the late nights. So Hublet, Goblin and I were usually first on station and lit the fire. Goblin learnt that you need kindling to light fires, and that if you are doing it 21st Century stylee you use fire lighters which "small people can't touch because they are poisonous". 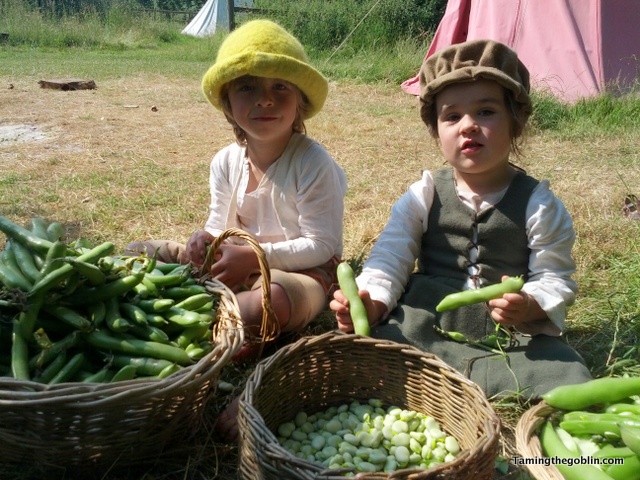 Our next job each morning was to fetch the vegetables and legumes that we'd be using in the pottage. We only used things that would have been available and in season (ish) in 16th Century England, so no potatoes or tomatoes. Goblin helped carry turnips, carrots, broad beans, cabbage and various dried pulses and beans. He learnt that carrots were called roots and the generic term for cabbage and other brassica was 'worts'. He also learnt how to shell broad beans and most days he helped to get them ready for cooking, sometimes accompanied by a friend or two.
As well as vegetables Goblin learnt about herbs that we picked from the garden. He helped to pick mint, savoury, sage, lovage, thyme, good king henry, rosemary and chives. These were added to the pottage in great quantities to add flavour, and Goblin helped to cut them up using his own knife. All the re-enactors at Kentwell carry a knife, mostly hanging from their belts. Goblin learnt that you never try to grab someones knife. And you don't play with blades that have been left on the table. You never know how sharp they are - and after we had all the knives sharpened on the manor this was an essential thing for him to remember. He was very good and only used his own knife (under supervision). 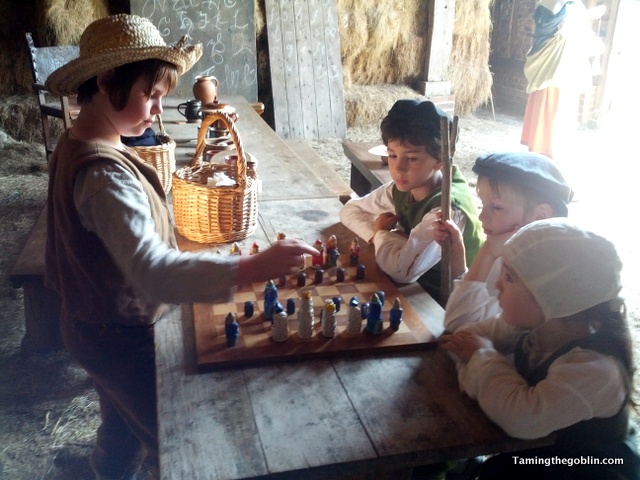 Goblin already knew some basic fire safety but at Kentwell he learnt extra things like never run towards a fire (incase you trip). And even if a fire pit looks like its not in use you need to check because logs can stay warm and smoldering a long time after the flames have gone. One morning he helped me dowse a fire that had been set in the middle of the sward and we watched the water boil as we poured it on the ash. 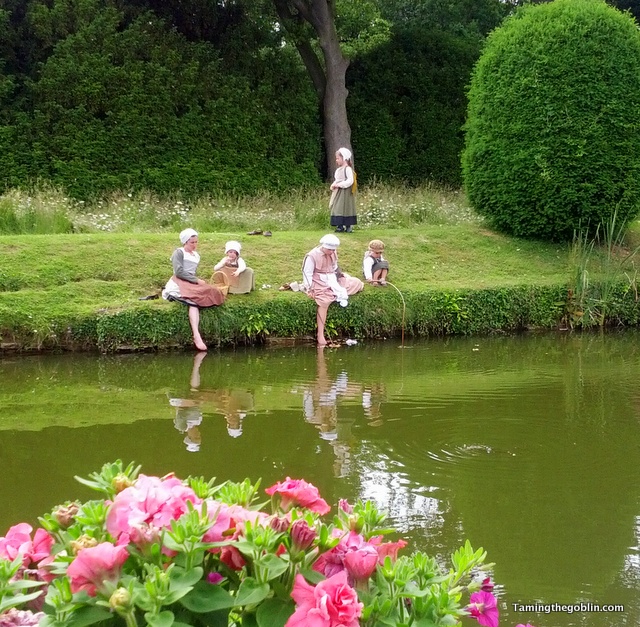 Goblin was given an authentic Tudor name. We called him Creature. When a labor wasn't going well and the midwife thought the baby might not live they would grab what ever part of the child they could (often a foot or hand) and not knowing the sex of the baby they would Christen it with a generic name so it would be able to go to heaven. Common names used by 16th century midwives included Creature of Christ or Vitalis, meaning life. Goblin took to his new Kentwell name and told anyone who asked that his name was Creature.
He also wore a dress. Boys were not breached until the age of 5 or 6, so both girls and boys wore a shift and pinafore (and a coat but Goblin never took to the coat and with the weather being so hot we didn't push it).  He also wore a hat, and coif. I was expecting this to be an issue as he doesn't often wear hats in the 21st century. But when we explained that everyone kept their head covered, he accepted this and wore his hat and coif every day. 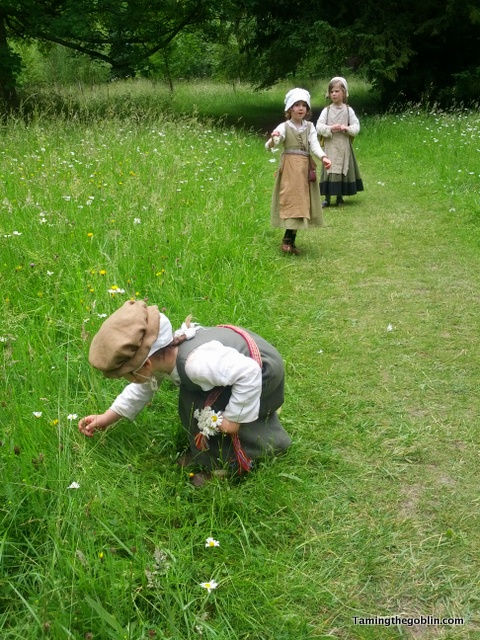 School parties visited the different stations on a route around the manor. Goblin would run to greet each new band and would happily explain to a group of thirty 12 year olds what was in each of the pots, checking with one of the Sotlers if he couldn't remember. One day I found him playing in a great cart surrounded by school children. I listened as he told them "We don't have TV and we don't have cars". Not very authentic but very accurate for a Tudor child, he really had picked up some of the differences between 16th century life and our own. 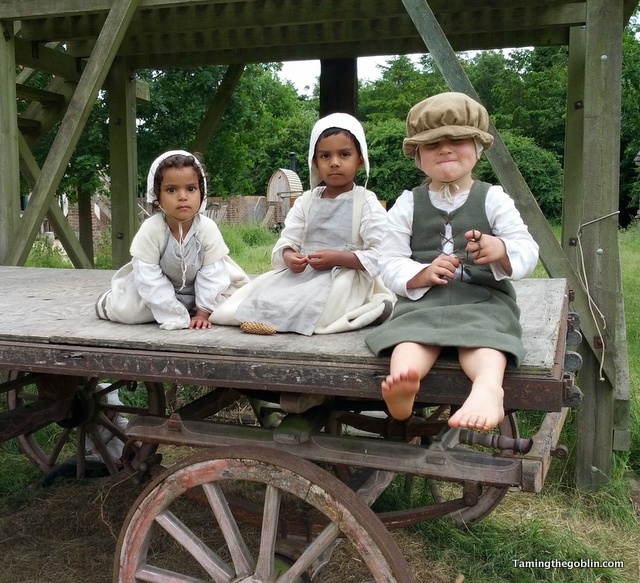 When Goblin wasn't talking to the public or cooking pottage he found many other ways to amuse himself. These included playing skittles, making pretend pottage, watching the older children play chess, climbing on the great cart, stirring the ash in the cold fire pits, feeding bread to the fish in the moat, picking wild ox eye daisies (and being careful not to pick the orchids - or pink daisies as he called them), and playing with the other children on the manor. He made friends with children ranging from 2 to 12. In the evenings he ran around the front sward of the manor with a group of 8, 9 and 10 year olds. The great thing about Kentwell is how age blind the re-enactor children are. Unlike school where children tend to stick to age bands, at Kentwell all the kids play together and look out for each other. 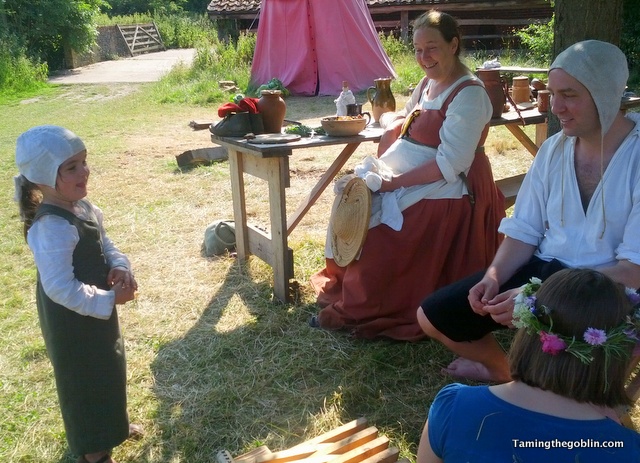 Believe it or not some re-enactor parents find it difficult to convince their children's schools to release them so they can take part in the main Tudor reenactment that happens during term time. I find this a little baffling as any good educational establishment could see from a glimpse that this experience is oozing with social and educational benefits. As well as the obvious historical education, just a short list of the skills that Goblin picked up or honed at Kentwell would include Public Speaking; Cooking; Herb identification; Animal husbandry; Acting; Fire Safety; and Social skills. I hope that for Goblin this will be the first of many opportunities to learn by doing, the true Montessori way.