Its the Sunday Parenting Party so please link up your parenting posts old and new, and check out what others have linked this week. Please don;t link kids activity posts, these can be added to the Kids Coop linky. This week I'm linking the following:
****** 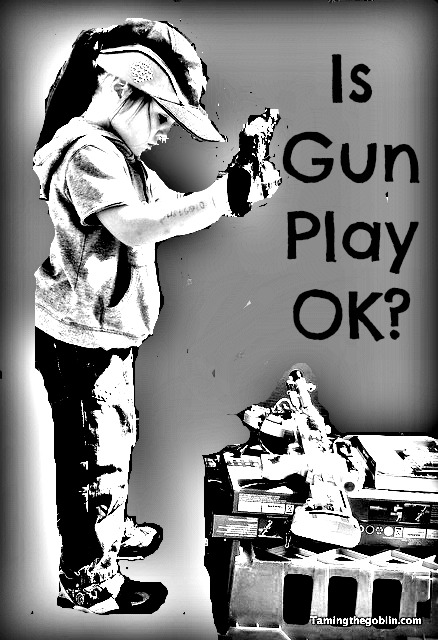 At the weekend we went to an air show at a military museum. Alongside the many stalls selling airfix kits there was a stall selling plastic machine guns. Goblin picked one up and fired the trigger. It made a satisfying "dududududu" sound and Goblin's face lit up, he smiled from ear to ear and looked at me for affirmation that this was the coolest toy on the face of the planet.  My heart sank but I smiled back and nodded approval. I didn't approve of the fact he liked a gun. In fact it creeped me out that he was holding it. But he was delighted by it and that made me smile. The broader question about whether I was OK with him playing with guns would sit and fester in the back of my mind for a while.

So do I think gun play is OK? My answer is a mixed one. I don't like seeing Goblin with toy guns and I won't buy him one for the time being (although I have no problem with super soakers). I've heard too many stories of kids getting shot while wielding replica guns - and granted they are all stories from America but they still scare me. I don't want Goblin to get the impression that guns are cool.

But I'm not going to stand in the way of my child acting out shooting scenes and pretending what ever he is holding is a gun. Hublet and his two brothers were brought up in a household where guns were banned. Hublet recounts having a cowboy outfit and not being able to work out what the unusual shaped pocket was for - his parents had removed the gun before giving him the outfit. The lack of toy guns in their lives didn't seem to dampen their enthusiasm for gun play. Hublet admits that every stick, every piece of lego, every carrot, or tube of toothpaste, was turned into a gun.

We also have the problem that Goblin loves vehicles. Since seeing the tanks at the Imperial War Museum he's been wanting us to make lego tanks complete with guns. Our last two cardboard creations were a tank and a helicopter both with cardboard guns. I figure if you take your child to a war museum for educational reasons, and they see tanks and planes with guns on them, you can hardly then refuse to replicate them in play on the grounds that you don't approve of guns.

I read a lot of very polarised views on gun play, but often from US bloggers. I think the question about whether gun play is OK is a slightly different one for parents in the UK. We live in a society where no-one owns a gun. My child is not going to accidentally come across his friend's dad's gun in a sock draw. It is insanely unlikely that he would find a discarded gun in the street. Even our police don't carry guns. The special armed police unit who shot two terror suspects in London a week ago have been taken off active duty for several weeks while they undergo therapy because police discharging fire arms in the UK is so very rare.

So gun play in the UK is fantasy play. Guns are associated with films and fiction, not real life. Yes the act of firing a gun is a violent one, but no more so than wielding a sword or a bow and arrow. I don't put arbitrary curbs on that type of play so why would I with guns. There is no denying that guns make me squeamish, especially when wielded by tiny people. But if Goblin wants to pretend play that he is shooting things I'm not going to stand in his way - except maybe to point out that pretending to kill things isn't cool.

I think if I lived in a country where the risk of Goblin finding and accidentally discharging a weapon was higher because the prevalence of guns was greater, I might be more cautious in my approach. That said I came across a really interesting post by Empowering Childhood, called Children need gun play, which suggests that children need to play out their experiences with gun encounters.

So for me, imaginary gun play with makeshift props is OK, but I wouldn't go so far as to buy Goblin a gun, because that feels a bit too much like encouraging a direction I'd rather he didn't go down. How about you? Where do you stand - and how prevalent are guns in your life?
******
My recommendations from last week include
Waldorf inspired birthday presents ~ Sunny Sweet Life
Freedom and Discipline ~ Home Grown Montessori
My Feminist Parenting ~ Our Feminist playschool
Mom Guilt is effecting how we are raising our children - and perhaps not for the better ~ Mompson
The Do's of helping your child adjust to divorce ~ A Healthier Michigan

Posted by The Monko at 12:30
Email ThisBlogThis!Share to TwitterShare to FacebookShare to Pinterest
Labels: 43 months, parenting, pretend play, The Sunday Parenting Party