It's the Sunday Parenting Party. Please link up your parenting posts, old or new, anecdote or treasured tips, happy, sad, good or bad. Please don't link kids activities, they can be linked to the kids coop.
*****
(Goblin is 43 months) 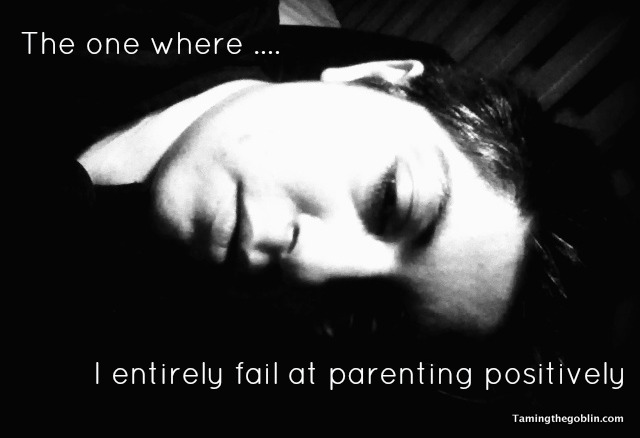 Goblin has been testing the boundaries recently and I have to admit its probably the hardest period of parenting I've gone through so far. He is utterly delightful as long as he is getting his own way and doing what he wants to do, but the second you ask him to do something - even if its putting his shoes on so you can take him to an activity he has asked to do - he will start screaming "no", throwing himself on the floor, kicking, hitting, bellowing. Well wow! There was me thinking smugly that Goblin's two year old tantrums had been rather mild, when actually they just hadn't fully arrived - he was obviously a late bloomer in the full mega meltdown stakes.

I feel slightly out of my depth as to what to do with him. I've read lots of Positive Parenting books and follow all the blogs. I know the theory and on a good day I can put it into practice.
On a good day I can stay entirely calm while he is having a tantrum, but it doesn't seem to actually make a difference. He still has it and it still lasts a long time. At least I have learnt not to worry about what other people think, so I can quite comfortably sit on the floor in a shop while Goblin screams hysterically and rolls himself about on the floor because I won't buy him yet another Hot Wheels. When I feel the tantrum might be abating I offer a cuddle, which sometimes sends him back to screaming, but sometimes calms him and allows us to move forward. So that's what I do on a good day when I am able to implement my Positive Parenting ideals.

But here is what I did the other day when I entirely failed to use positive parenting techniques.
Goblin had taken over an hour to get his clothes on. I had known it would take a while so I'd got started early. We needed to leave the house at 10am to get to the farm where we were meeting friends. After an hour of him failing to get dressed while messing about down stairs I kinda lost the plot. I grabbed him and carried him under my arm to his room where I threw his clothes in and shut the door yelling "You can come out once you are dressed". I then stomped off to my room where I tried to calm myself down.

To my amazement he got dressed really quickly - which actually only served to irritate me as I'd been trying for an hour to help him. But he then refused to leave the house. He said he didn't want to go to the farm, he wanted to go to the steam trains instead. I agreed to check to see if they were running. When I checked on line they weren't running. I tried to explain this to Goblin and was met with "yes they are".
Well what do I do with that?
"No Goblin I checked, they aren't running, we can go tomorrow" his response "Yes they are running" Scream, shout, hit.
Not knowing what to do I told him to go to his room to calm down. I hate the idea of sending a child to their room. It feels wrong to me on so many levels - first because its where they sleep and I don't want sleep associated with punishment, second because I don't think kids are good at calming down on their own, I feel 'time in' is better than 'time out'. But to be honest I was losing any patience I had. All my knowledge of what positive parenting solutions I should use where out weighed by the fact that I couldn't calm down. It was better for the both of us to be apart.

Goblin went to his room and when I felt I'd calmed down I went to find him to try once again to explain that we couldn't go to the trains but we could go and see his friends at the farm. I knew if we didn't go to the farm he'd ask in the afternoon and then get upset when I told him we'd missed it.
But I was met by more screaming that the trains were open.
I went and sat at the top of the stairs and sobbed. I was out of ideas. I don't want to fight with my child. I don't want to scream and shout but sometimes I get worn down and 8am is not the best time for me even on a good day.
Eventually I decided my only option was to be tough and stop offering choices. I went and picked him up and informed him we were going to the farm. "You are three, you don't get to dictate what we do".
He shouted and fought as I marched to the car.
By the time we were half way to the farm he'd calmed down, I'd calmed down, we'd both said sorry and we had a lovely morning at the farm.
But it didn't last long. The afternoon was pretty much more of the same.
Sigh!
Why does it have to be this hard?
*****
My top five from last week are
Peeing outside ~ Raise a boy
100+ brilliant bump and baby bloggers ~ Mums make lists
No School road less travelled ~ Fiddlesticks and Faerymother
Learning to enjoy the ride ~ 3 Children and it
Spin City ~ The Tao of Poop

Posted by The Monko at 14:30
Email ThisBlogThis!Share to TwitterShare to FacebookShare to Pinterest
Labels: 43 months, parenting, The Sunday Parenting Party