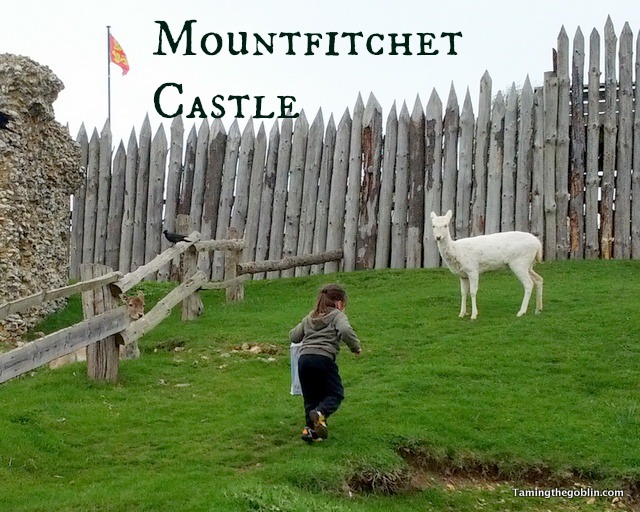 Mountfitchet Castle is situated right next to Stanstead airport opposite the Mountfitchet railway station - in fact it shares the car park with the train station so you couldn't ask for easier public transport links. It's a reconstructed Motte and Bailey castle from the Norman period (think Battle of Hastings 1066). 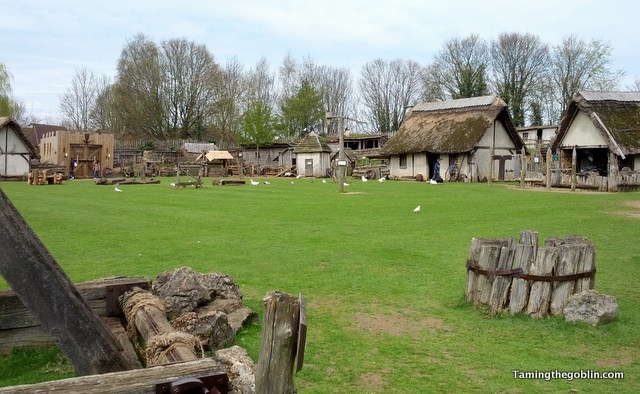 The Main norman village is up on the hill and the reconstruction retains all the battlements and defences that would have existed at the time. This means that there are plenty of spiky sticks and steep steps so while I felt completely comfortable letting Goblin run around, this museum is probably not for parents of a nervous disposition. Its also worth noting that the castle is on a steep hill, with ditches and cobbles, plus the huts are all quite small with steps to get in, so its not at all buggy friendly.
That said its an absolutely beautiful setting in any weather and young children can run about freely (although you might need to keep an eye because seriously there are spiked stakes sticking out of the ground in places). 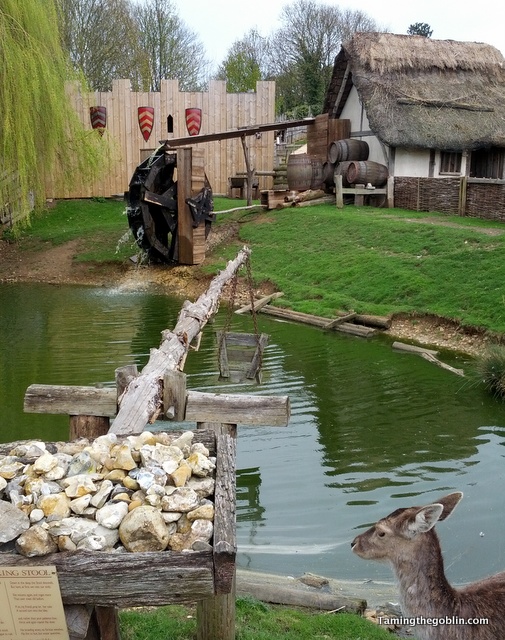 There is plenty for smaller, as well as larger children to do, with lots of things to touch and play with. Goblin enjoyed trying on different Norman soldiers helmets and pushing the mill stone round. 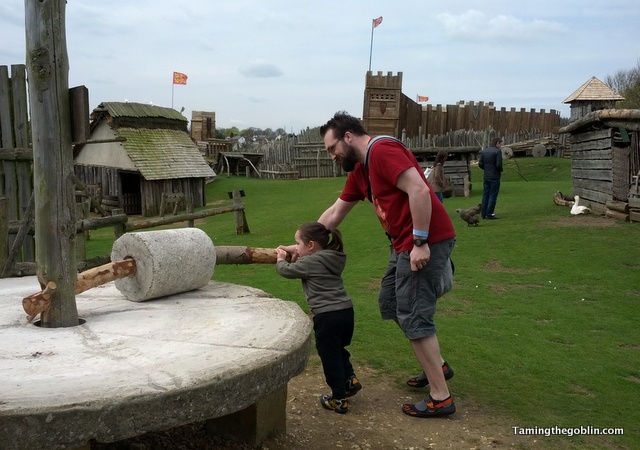 However he was having a bit of an anxious day. He doesn't do well with noises at the best of times and today he was totally freaked out by the motion sensor controlled audio that played in most of the huts. This was exacerbated by excessively creepy mannequins dressed as peasants in many of the buildings. There was also a great deal of torture equipment and skeletons on display. I'm sure the idea was to make it appealing to older children in a "Horrible Histories" type way, but for poor Goblin this part of the museum was all a bit too scary. 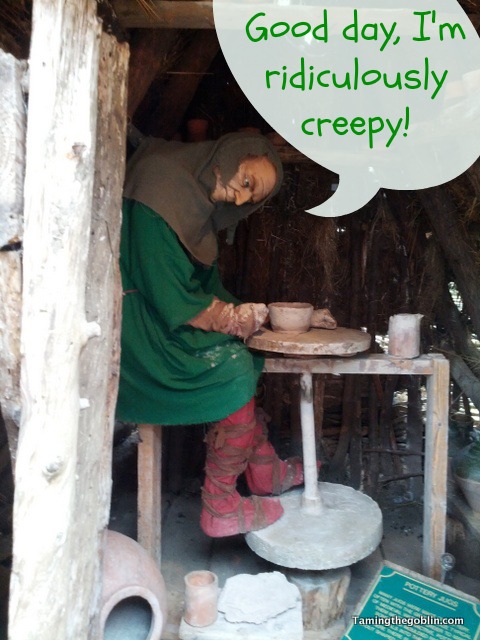 But he was absolutely taken by the animals. There were sheep and fallow dear roaming freely and the shop sold bags of food, and the dear came and ate out of your hand. We acquired an entourage of ducks, chickens and peacocks while we still had the food with us. But they soon dispersed when the last of the grain was gone. 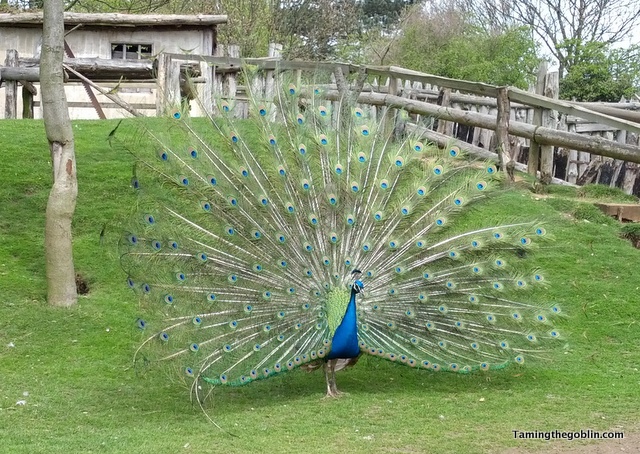 As well as the awesome castle and village there is a toy museum and dinosaur "park". The dinosaur park is actually just some 'life sized' models of dinosaurs with audio noises pipped through, on the path o the way to the toy museum. Unfortunately it just served to freak Goblin out again. 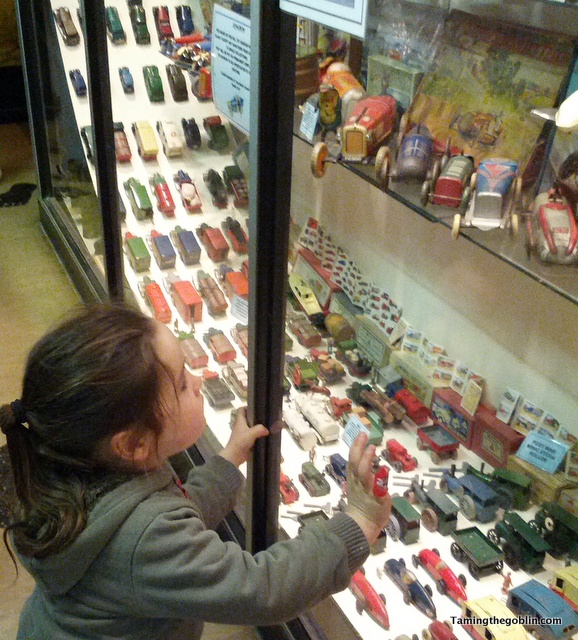 But the toy museum was a success. There was glass case after glass case stacked with model cars, planes, trains and robots. There was even a Star Wars exhibit for Hublet to drool over. I thought Goblin would be upset that the toys weren't for playing with but he seemed quite satisfied to just lick the windows of the displays. 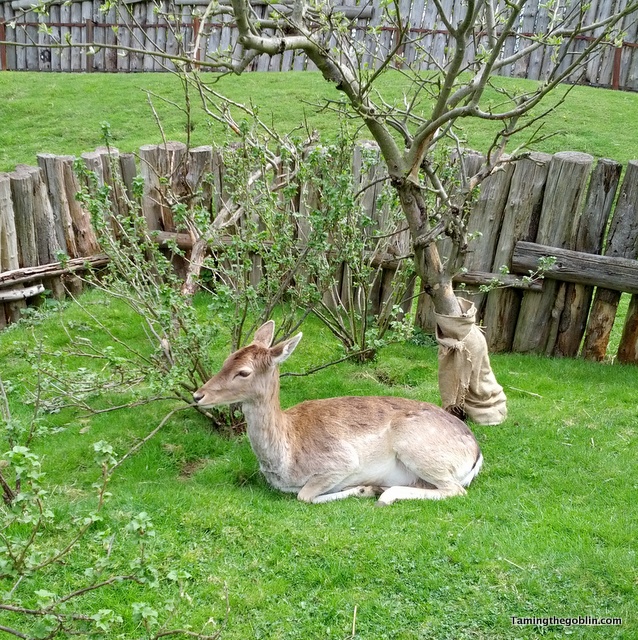 Despite being on quite a small site we easily managed to spend three hours there and would probably have stayed longer if Goblin had been less tired. There is both an indoor and outdoor picnic area to have lunch in and their tearom does some lovely cakes and sandwiches. All in all I'd say this is a must visit for anyone within a couple of hours of the place.

Posted by The Monko at 11:18
Email ThisBlogThis!Share to TwitterShare to FacebookShare to Pinterest
Labels: 43 months, animals, history, outings