Its the Sunday Parenting Party. Please link up your parenting posts old and new, good or bad - we promise not to judge! Please don't link up Kids activity posts, these can be linked to Kids Coop. This week I am linking the following.
******
(Goblin is 40 months) 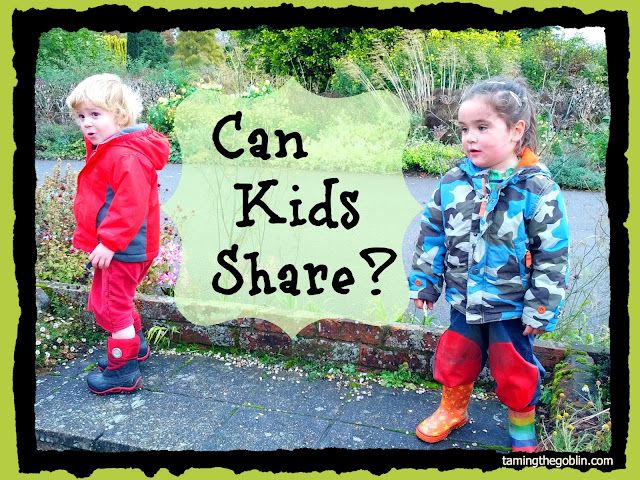 I've been musing on sharing. Its something that often triggers tears and wails on playdates. This post is possibly more of a rant than a well constructed train of thought but here goes.

There appears to be a general consensus among most parents that kids in their early years are a bit useless at sharing. But are we being fair?

What exactly are we talking about when we say sharing?

The normal use of the word sharing is when we have more than one of something and we hold onto one of them and give out the others. So if I have a box of chocolates I might share them among my friends. We all get one.
Surprisingly little kids are quite good at this type of sharing. They get to have one, and then they also want their friends to have one.
When we went to a friend house recently Goblin surprised me. He spent a while taking the bowls of crisps from the table and walking them round the room, offering them to all the adults. This wasn't something we'd taught him to do, he just wanted everyone to share the crisps.

But when we talk about children "sharing" we tend to lump a whole bunch of activities under the one umbrella phrase "sharing". Usually we are talking about turn taking, or other children using one child's things while they play with something else.
Both of these types of "sharing" are equally as hard for adults as they are for kids. Think about, when was the last time you happily allowed someone to come into your home, pick up your stuff and muck around with it without feeling slightly on edge. In fact as adults we know its not cool to muck around with someone else's stuff specifically because it will upset them, and yet if a child is upset by another child playing with their toys we tend to think that child is being unreasonable.

Turn taking
Turn taking is a good lesson for small children to learn, and if implemented empathetically it can go smoothly. But hands up who recognises this scenario - A child is happily playing with a toy, another child comes along and snatches it and the first child burst into tears, at which point their mum says "You need to learn to share". Err! Do they?
Why does the other child who snatched the toy have more right to it? What that teaches is sharing just means giving up anything you were enjoying playing with.
As an adult if I was playing on my phone and a friend came over and took it from me without asking, and with no information as to how long they were going to have it for or why they'd taken it, and no offer of an alternative 'toy', I'd feel somewhat miffed. That's a valid feeling for a child to have, so why do we as adults often think that the child is just not "sharing nicely".

I'm not an expert on how to get sharing to work - it is certainly still a work in progress for us. But I have noticed this, to encourage effective 'turn taking' it is helpful to let all the children concerned know what 'the rules' are. Snatching shouldn't be rewarded. Just because they want it doesn't mean they should get it. And even if a child asks nicely that doesn't mean the first child should automatically give up their toy. It is valid to ask the second child to go and play with something else, but too often parents try and "be fair" by giving the child that 'wants' what ever it is that the child that 'has' is playing with. Often without assessing if that is fair.
Things to consider in mediating a sharing 'episode' include: How long has the first child been playing with it? Is there only one of this type of toy? Are they likely to reach a natural conclusion? Does the other child always want what the first child has?

If it's a cool toy (like a ride on) and its fair that both kids concerned should get a go then set a time limit on playing with the item. The trouble with turn taking is that often a child doesn't know if they will get their item back.You can reassure the first child by setting clear limits for all children concerned.
With very small kids you can say"play with that until I count to twenty and then it's x's turn for twenty and then you get it back". Let the child know they will be getting it back. Even adults get snarky if they lend a friend something and after what feels like a reasonable time limit, the item is not returned.
If you have an egg timer you could use that for older kids, but realistically for smaller children a count of twenty is probably as long as they will last before having a melt down (and rightfully so).

Some kids will always want what the other child has. If the second child is wanting everything that the first child has been playing with - the issue is with the second child not the 'lack of sharing' from the first child. For this scenario it may help to get the children to choose a toy and stick with it. It isn't helpful or fair to insist on a child handing over a toy just because their guest wants it. That's not how life works.

I guess what I'm trying to say with this post is don't expect your kids to live up to higher expectations than adults, when was the last time you gave a treasured item to a friend indefinitely because they snatches it and refused to give it back?

*****
My top five posts from last week are
Will potty training ever end ~ Art Mama Says
Why we love mud ~ Making Boys Men
The Scoop on Baby Sign Language ~ Austin City Little
10 Random things my 2 year old is scared of ~ Seeking Shade
Are you there God? Its me, Rachel ~ The Tao of Poop

Posted by The Monko at 11:46
Email ThisBlogThis!Share to TwitterShare to FacebookShare to Pinterest
Labels: parenting, The Sunday Parenting Party