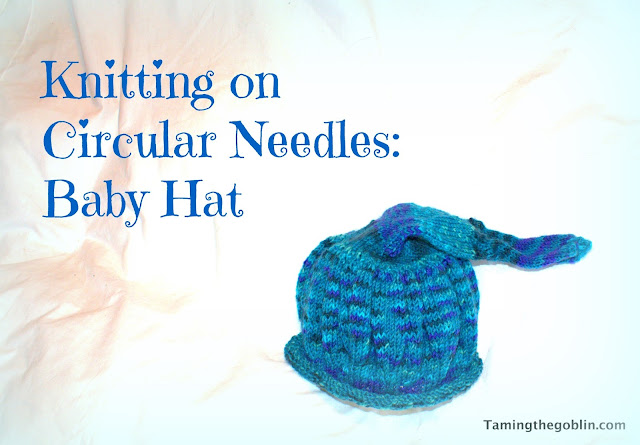 When I was pregnant with Goblin I attempted to knit him a jumper using circular needles. My first attempt was a bit of a disaster. At some point I must have reversed the direction of my knitting which resulted in me knitting a möbius strip. This is something I could never have achieved if I'd actually been trying. After that I retired the circular needles. However one of my friends is expecting her first child and I wanted to make her something special so I thought I'd give the needles another try. 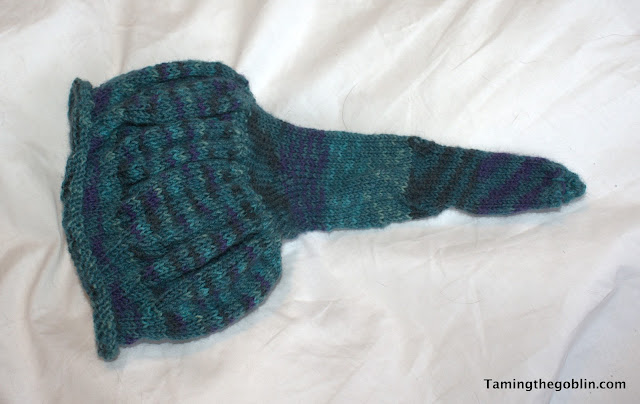 Rather than doing anything sensible like use a pattern I thought I'd just wing it. So I started out on double point needles. Here is a tutorial that I found on how to use double points. Of course using the tutorial would have been far too simple so instead I just guessed how to use them. And I guessed wrong. Instead of realising that you knit to the end and then carry on on to the top of the next needle, for some reason I thought you had to turn each needle round. The result was that the start (the point) of the hat has a cool little spiral effect (again something I discovered by accident). After about five goes round I realised my mistake and started knitting using the double points correctly. I started with about 5 stitches on each of my 5 needles. The yarn I was using is supposed to be for socks and has a pattern imprinted into it which appears as you knit. This is my ideal way of knitting - as little effort as possible for maximum effect. 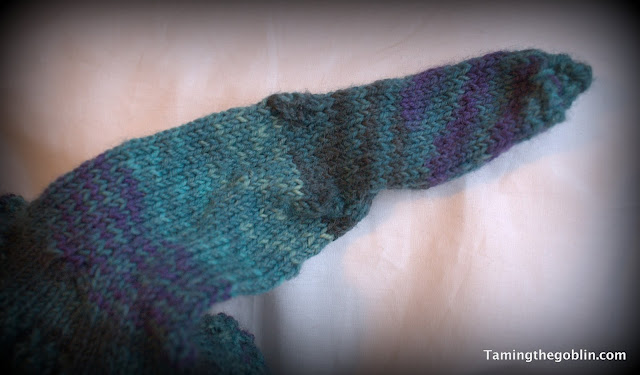 After I'd knitted what I felt was a suitably long gnomey point to the hat I started to increase. I added a stitch to every stitch I knitted for three rows. At this point I transferred from double point needles to a set of circular needles. That made it easier to see how wide the hat was. The effect of increasing by so many stitches was to increase the hat circumference significantly. Once I'd got it to a wider circumference I carried on knitting until it looked about the right depth. At that point I decreased the stitches to bring the edge of the hat to a circumference suitable for a babies head. I'm afraid this post is a bit useless if you want to follow it as instructions because I basically used judgement rather than counting stitches.
The result was to pull the bottom of the hat in and give it a lovely rippled balloon effect. I think the hat is shaped a bit like a squash. I started casting off when I realised the ball of wool was running out. So the hat is exactly one ball in total. 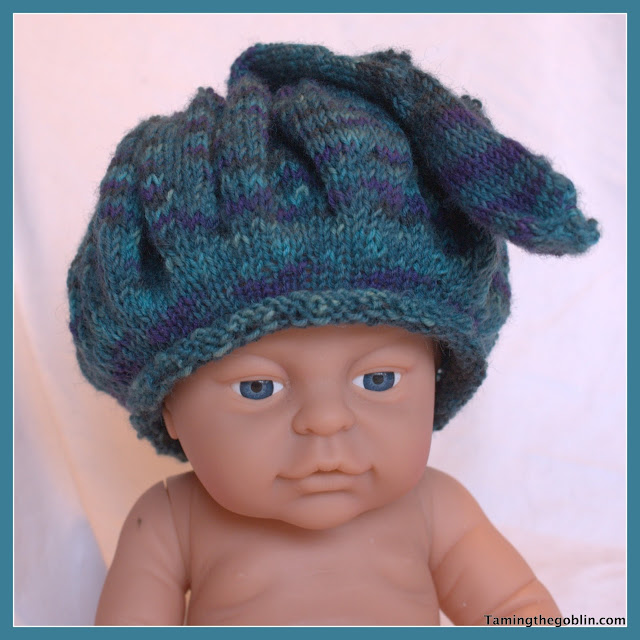 And here is the end result being modelled on Goblin's particularly ugly plastic doll. I'm sure it will look better on my friend's, bound to be beautiful, baby.

Posted by The Monko at 05:30
Email ThisBlogThis!Share to TwitterShare to FacebookShare to Pinterest
Labels: knitting, Mummy's crafts