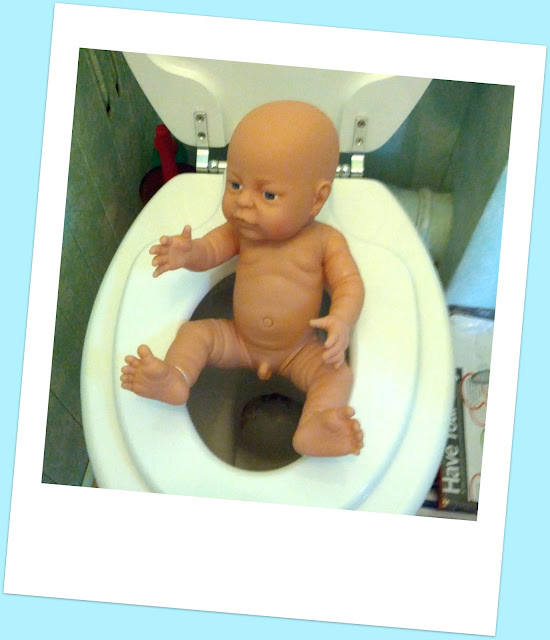 Apparently there are lots of different ways to potty train, but as I didn't read any books before we tried with Goblin I am probably more ignorant than most on what the options are. We just went with what felt right for our family and our parenting style. We used the 'potty learning' method. I used to think that people who called potty training "potty learning" were just being pretentious, but having done it with Goblin I now recognise there is a difference between this and the super fast and (sometimes) super young approach. I didn't want to risk toileting becoming "a thing", an issue that caused stress or became a battle. So for us the slow learning method appealed more.

I thought I'd write about our particular journey not because I think it is "the right way" to potty train (I don't think there is one right way), but because I wanted to share some of the tricks that seemed to work and things I never knew about potty training.

We bought a potty soon after Goblin turned 2. We didn't intend that he would start using it straight away. The idea was to make it a familiar object. We talked to Goblin about the potty and played with his baby doll getting it to do horrendous loud farty poops with Goblin wiping his bottom afterwards. Goblin thought this was a hilarious game.
In January out of the blue one day Goblin asked if he could sit on the potty. I was very excited. He sat on it and did a poo. I was so amazed that I took a photo of the poo and sent it to Hublet's work email (in hindsight this was probably rather inappropriate - I never thought I'd get so excited about faeces). We didn't use treats or rewards when Goblin had a toilet success. I know these can be effective but I didn't feel they were necessary. Goblin is usually quite content with his own sense of independent achievement and I wanted him to go to the loo because he needed the loo and not because he associated it with getting chocolate or stickers. Over the course of that week Goblin used the potty a few more times. I thought we had had an amazing break through. But then all potty activity and interest ceased......... So we backed off completely for a while.

By this point many of our friends were potty training their toddlers and I had to try really hard not to get sucked into feeling I ought to be doing something more proactive because everyone else was.

Around April we started talking to Goblin about pooing in the toilet again. This time we suggested using the new Family Toilet Seat

we'd got for the toilets. Before putting him in the bath one day I sat him on the loo and said "This is how you do a poo" and jokingly pulled a really staining face like I was trying to squeeze out a giant one. Goblin thought this was incredibly good fun and copied me. To both our amazement his imitations produced results, and as we heard a plop in the pan he said "What's that?". I lifted him off the loo to see (he always wants to see his poops now). Goblin was very pleased with himself and this ignited a new interest.  He would ask half way through a bath if he could get out and use the toilet. Then he'd sit there, do his straining face and without fail he'd produce a little poop. Of course most of his pooping was still confined to the nappy.

At this point I thought I might step it up a gear, so as the weather got warmer I started giving Goblin nappy free time throughout the day. I explained that if he wasn't wearing a nappy and he needed a wee or a poo he had to use the loo (our down stairs toilet is right next to the living room and was fitted with a child seat too). There were a few accidents on the sofa, usually involving a good episode of Fireman Sam and imminent bed time.   However in general when not wearing a nappy Goblin managed to go to the loo in time and successfully do his business. Now I said at the beginning of the post that we were taking our time with this so it will come as no surprise that we let him do this 'naked' part of the learning for a couple of months before taking it any further. But eventually we had to move on, and then came the underwear ........ And that is a post for tomorrow.


*****
I don't think there is one way to potty train, its about finding what works for your family. So to help you find what will work for your child here are some links to other methods, tips and books:
Potty training in three days with Growing a Jeweled Rose
Self training twins by Caution: Twins at Play
20 potty training tips From the Mouths of Mums at B.Inspired Mama
Potty Training books for kids at Rainy Day Mum

If you have any useful tips please leave a comment for other readers. Thanks