(Goblin is 29 months)
I had been having a bit of a wobble as a parent. I had been starting to look around and see that many of my friends were implementing quite strict rules and discipline with their toddlers. And I wasn't. And I wondered whether I was doing something wrong. I discussed it with Hublet and he tried to reassure me that we were doing the right thing for our son. But still I fretted. And then, as if by magic, that same week I discovered this amazing parenting book which did reassure me that what I was doing was right for me and my child. I normally try to steer clear of writing about parenting techniques because:

So before I start I would just like to say that I believe that there are many different ways of parenting and I do not believe that one way is right and the rest are wrong. When choosing the methods you use to parent, teach and discipline your child you need to think about what will work for you given your own temperament, your child's temperament and the context of your family.
I have a really good friend who 'does parenting' in a completely different way to me. I respect what she does, and I'm impressed by the way she follows through with things. It obviously works for her because her child is a delight to be around, but I wouldn't feel comfortable using her methods.  That doesn't mean I think they are wrong. That just means I need different tools that fit my personality/temperament.
And that is where this book comes in:  "Parenting with Positive Guidance: Tools for Building Discipline from the Inside Out". 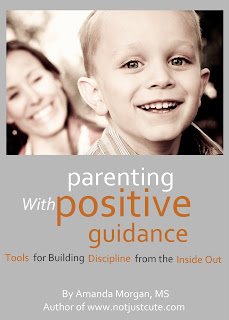 Its written by Amanda Morgan and you can buy the e-book version from her blog Not Just Cute for only $9 which works out at about £5. It is written in a very accessible way with clear examples of how to use the tools she is offering. And what I really like is that she talks about her own 'parenting fails' in the book, so you feel like you are being brought along on a journey with her, rather than being judged by an expert as many parenting books do.


As soon as I started reading the book it resonated with my way of parenting
"Focus on teaching, not on blind compliance."
This is certainly what I try to do even if sometimes I fail and end up shouting.

How has it helped?
I overuse the word "NO" and "DON'T". I know that all the parenting books say you should use positive language rather than saying no, but until I read Amanda's book I hadn't really figured out how to do that. But her simple instruction makes sense - "say what you want to see". 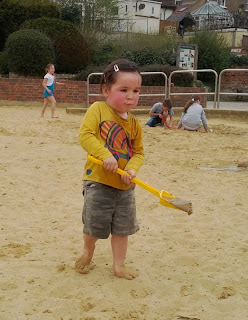 Goblin and I were at the park the other day. There was a big sand pit full of sand and kids. Goblin was having lots of fun playing in the sand. But at one point he got a bit over excited and started throwing the sand in the air. With so many other kids around I could see this was going to end in tears. Normally I would have said "Goblin No don't throw sand". And nine times out of ten Goblin would have ignored me and done it again. But this time I was feeling positive and using my new techniques I said "Goblin, the sand needs to stay on the floor".
It wasn't an ideal sentence because obviously I still wanted him to play with the sand, lifting it off the floor with his spade to put in his bucket. But the sentence got the job done. Goblin understood, and he stopped throwing sand, with no arguments or tantrums or repeating the action to see how I'd react. And the most amazing thing was how good I felt. I had calmly used a positive phrase so I felt proud of myself for staying calm and positive, and proud of my son for following an instruction.
(I also felt a little smug because about 50 seconds before I used my positive phrase, a mum near by had used the "no don't throw sand" with the result that her son just did it again - I know I shouldn't gloat but I am a bad person!) 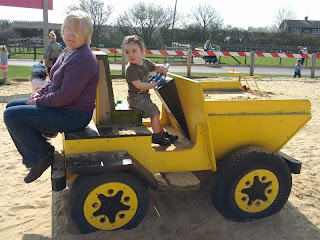 Another piece of Amanda's guidance is recognise where your child's emotions and actions are coming from. Goblin is usually a really happy child and when he starts 'acting out' whether its hitting, throwing things or bursting into tears 'for no apparent reason', its usually because he is tired or coming down with something. Recognising this, and empathising has made it easier for me to stay calm and 'teach' rather than taking it personally, getting cross and frustrated, and having my own adult tantrum.

Here is another cool example of how I have taken advice from this book and been able to apply it directly with a positive result.
Goblin was playing at a table with some toys. Other children were around and one got very into his personal space (Previously I may not have noticed that this was where his frustration was coming from - and it is a legitimate frustration - I don't like it when people get into my personal space). He turned around and pushed her. Normally I would say "Goblin NO Pushing is not nice". Instead I said "Goblin, I can see that you feel uncomfortable with her standing that close, why don't you say 'Please move back'".
He repeated to the little girl "Please move back". The girl, who was probably just freaked out by my presence, ran off to do something else.

The two tools I was using were
Recognising and naming the emotion; and
Providing a social script.
Rather than feeling embarrassed by my sons action and my reaction in front of other parents, I felt positive about how I'd helped my son to try and improve his social skills, and proud of his attempts. 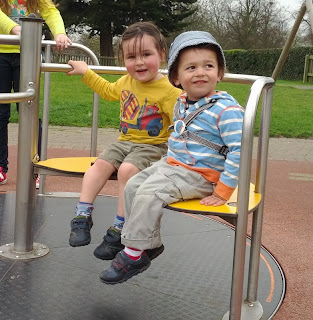 Obviously reading this book hasn't suddenly made me an amazing parent. I still have moments (especially at 6am) when Goblin does something annoying and rather than engaging my 'teaching' brain I engage my 'screaming at the top of my lungs' brain.
But this book has made me notice quicker when I engage the wrong brain. The other day I was getting exasperated with Goblin - I noticed and I stepped back - took a few deep breaths - apologised to Goblin and got down to his level and calmly explained what I needed to see from him. More effective and more positive for both of us.

If you think you could benefit from having a few more tools in your parenting armoury you should read this book.  Its only 102 pages.  Read it - and tell me what you think.


(I have not been asked to review this book, I am only sharing it because I genuinely believe it has some really good content that has benefited me in my parenting).

Posted by The Monko at 22:35
Email ThisBlogThis!Share to TwitterShare to FacebookShare to Pinterest
Labels: 29 months, books, parenting