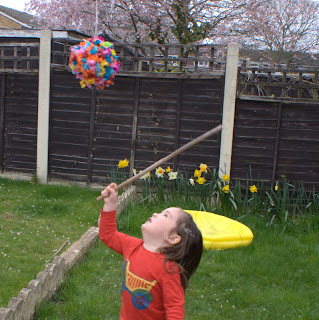 Goblin and I made Easter egg piñatas and I am so pleased with them. Some of you may be thinking "why would this crazy woman intentionally encourage her toddler to hit something with a stick - especially something they spent hours making?" The answer is, its great learning. Its amazing practice for hand eye coordination and gross motor skills. I guess it also teaches cause and effect - hit it long enough and it breaks - although the reward of chocolate falling from the sky may not be great for teaching that it is not normally a good idea to hit things until they break. 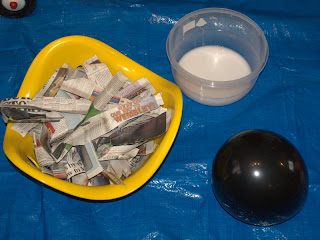 So, the Piñata - The first step is really easy - you just take runny glue (PVA) and water (we use a 50:50 ratio), and dip strips of newspaper into the mix and then wrap them round a balloon. Goblin helped me rip the news paper and wrap the balloon - but I didn't get any photos because I was covered in glue (not great for your camera). 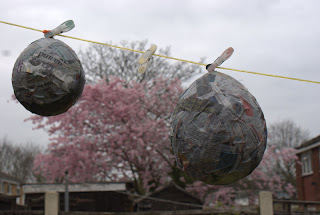 I made one big one and two smaller ones. I hung them on the washing line to dry out, but it started to rain so I brought them inside and in a moment of pure stupidity I put them in the oven on a very low heat to dry.
"Now class, who can tell me what happens to the particles in air when they heat up?"
That's right they move apart, thus expanding the balloons inside the paper mache. (Are you impressed that I remembered that little bit of GCSE science - after the event of course). 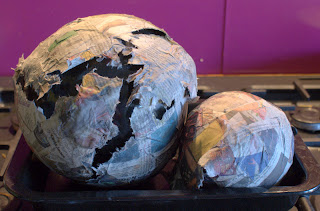 So the paper mache ripped. DISASTER? Well no, not really. You see paper mache can be really surprisingly robust, and if you are making a piñata for a toddler to hit and break you need to have some weak points where you know it will actually spilt. So my 'hulked out' balloons actually did me a favour. If you don't get natural rips due to being a bit stupid like me, you can just cut your paper mache balloon in half and then use tissue paper to stick the balloon shape back together - that will give you a weak seam. 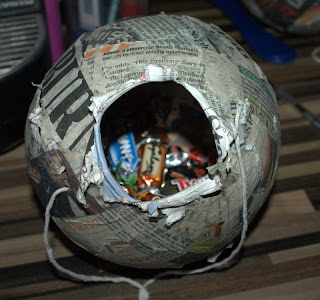 At the top of the balloon thread a string through two holes - far enough down that the string won't just rip off at the first hit (you will use this later to hang the piñata). Next step is to fill them with yummy things. I used cadburys celebrations. If you want something more healthy here are a few ideas:


You need to remember the whatever you use will be falling from a height onto the floor so it needs to be non breakable. 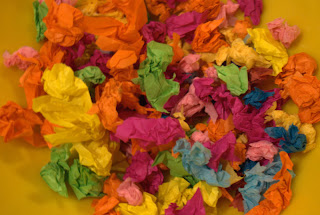 The next step is to scrunch up a load of tissue paper. I tore rough two inch squares and then screwed them into balls. 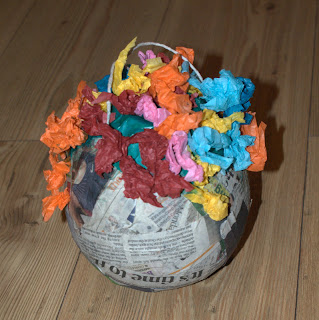 I covered my holes and rips in flat sheets of tissue paper stuck on with glue (no water this time, you need just the glue). And then I started sticking the tissue paper twists all over the paper mache. Half way through I decided it would look better if the whole balloon was covered in flat tissue paper first so that if the twists fell of there wouldn't be ugly newspaper print underneath. 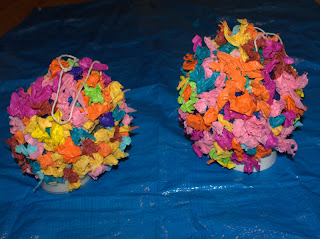 When I'd covered them completely I left them to dry sitting on cellotape rolls to lift them off the ground. 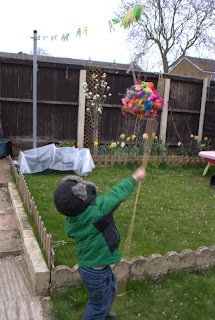 When your piñata is dry you can attach a longer string to the loop you made earlier. And attach it to somewhere high up. If your child is quite impulsive like Goblin you will want to hang the piñata out of reach of the child so they can only break it with a stick and not by grabbing it and pulling it apart. I used our washing line, but if you have kids of different heights you may want to attach it to a broom handle which will allow you to control the height, and to remove it from play quickly if the children get too excitable. 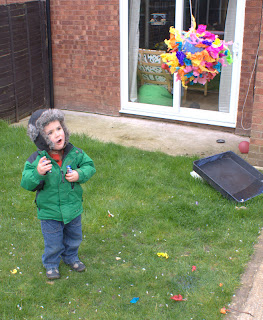 Now I'm guessing that this is stating the obvious but I am going to say it anyway - If you have more than one child playing at the same time you will need to supervise carefully and make sure they take turns so they don't end up hitting each other by accident. Using only one stick is one way to limit risk. 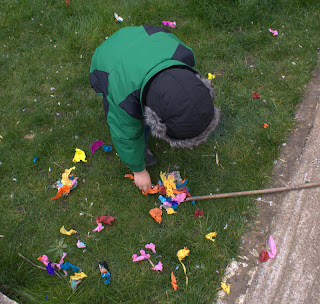 Our piñata turned out to be incredibly solid. It took us about 15 minutes to break it, (so long that we needed to go in and get extra clothing because it was quite cold) and even then it required super strength mummy power! 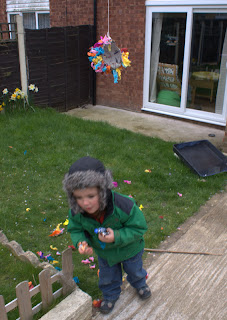 But it did finally give way and release its treasures. And Goblin excitedly ran around the garden collecting up the chocolates. I managed to ration them later in the day. I left the debris in the garden because it looked so pretty!

Posted by The Monko at 20:40
Email ThisBlogThis!Share to TwitterShare to FacebookShare to Pinterest
Labels: 29 months, gross motor skills, spring, toddler craft and painting