Source: Hubblesite.org
Recently I was looking at pictures taken by the Hubble telescope. For anyone who doesn't know about Hubble, its a giant space telescope launched in 1990. It orbits the Earth above the atmosphere. The atmosphere normally distorts and blocks some of the light that reaches Earth, so with the telescope sitting above the atmosphere it gets an incredible view of our universe.

Source: Hubblesite.org
The pictures from the telescope are incredible. There is a whole website dedicated to them - http://hubblesite.org/gallery/.

Source: Hubblesite.org
I decided to attempt some Hubble inspired arts and crafts with Goblin.  I started with some Galaxy playdough. I used a recipe from Nutrurestore. I added black and blue food colouring and lots of sequins and glitter. It is incredible how much glitter and sequins you need. I added as much as I thought I'd need, then doubled it. And still the playdough seemed to swallow them up - like the darkness of space. 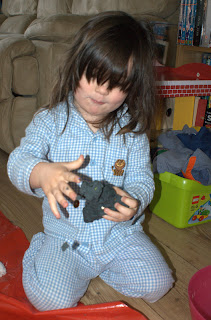 Goblin liked the playdough though. He used his rollers and cutters on it. And mashed it about with his hands. He made me a "birthday cake" with some crayons as candles. 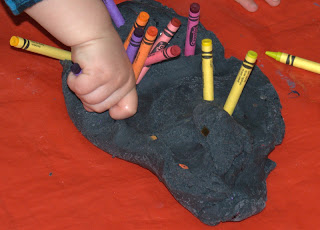 And because Goblin likes to use his entire body to experience things, he walked on it too and then invited me to do the same. I'm glad I tried it, it felt great. It was cold and squidgy and a really unusual sensation. 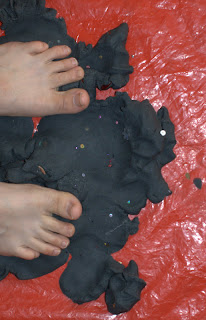 After a few days of play Goblin asked to play with it outside. I would have resisted this with bought playdough but because it was home made I felt much more relaxed about how Goblin played with it. So he took it outside and we played catch with it. Then he rolled it around in the dirt and grass. And when he was finished (and it was pretty disgusting) I popped it in the bin. 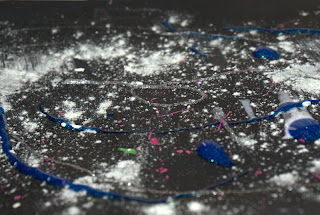 We also tried to recreate some of the beautiful Hubble photos of nebulas, stars, galaxies and the universe. I mixed some glitter and flour in a bowl and gave it to Goblin to sprinkle on paper that I had covered with glue. 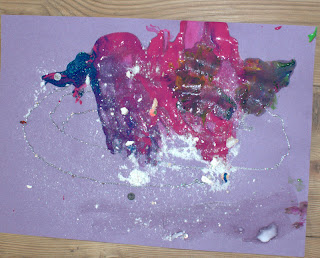 Then he used glitter paint and regular paint to add colours. I tried to get Goblin to use a toothbrush to flick some colour into the paper - to make tiny stars, but it was too tricky for him to master. So I helped. But I lik ethe purple panting the best which is the one he did all by himself. It is very Hubble-esque. 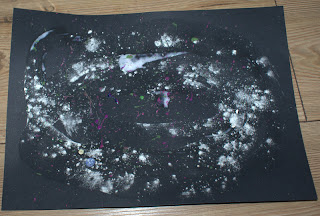 These activities are great for young toddlers like Goblin, but they would also make a nice light extension to a solar system or space unit for older home schoolers. There is some great information on Hubble at http://hubblesite.org/the_telescope/hubble_essentials/. And every child should have a look at the Hubble picture gallery.