I made something pretty! 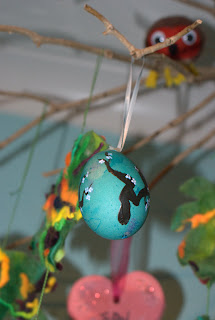 I was inspired by two posts at Art Club Blog. The first was painted eggs and the second was painting cherry blossom. They were both so lovely that I thought I needed to do some art for me (rather than Goblin - although it turns out he appreciated it too). 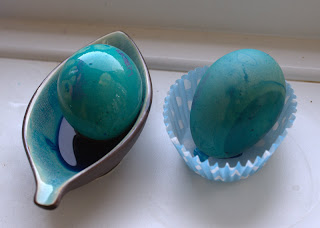 So I blew some eggs and died them with food colouring. If you haven't blown an egg before its very easy. I used a thumb tack (drawing pin) to make a tiny hole in the top of the egg, and at the bottom I used the tack to make two little holes about 3mm apart. Then I took a kebab skewer and pushed it between the two holes at the bottom. That broke them into one larger hole. I pushed the skewer in to pierce the yolk. 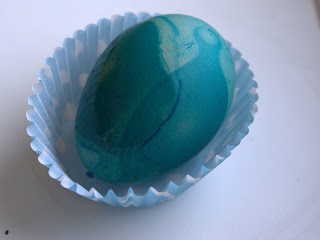 Then I blew through the top hole and the contents of the egg came out the slightly larger bottom hole. When all the contents were out I stuck the egg shell in a bowl of water and sucked through the top hole. Sucking up some water, then swishing it around inside the egg to rinse out the inside. Then I blew that water out by blowing in the top hole again. I popped the egg shell in a shallow bowl and rolled it in food colouring. I made two blue ones and an orange one. 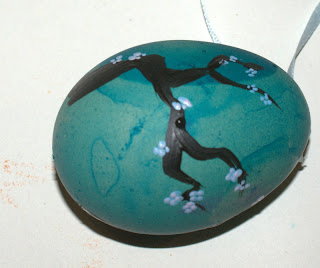 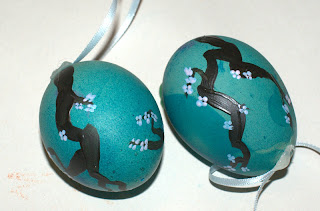 I painted cherry blossom on the blue ones. I was taken with the Japanese look of the eggs. So I painted a coi carp on the orange one. 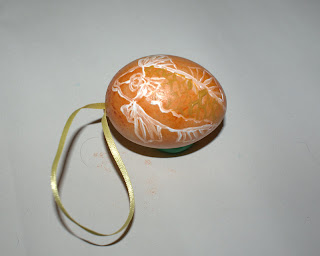 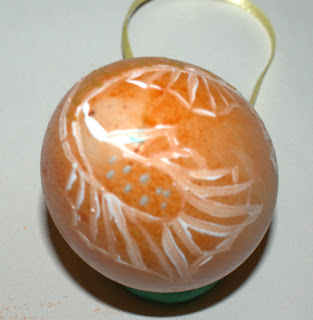 And I hung the eggs on Goblin's tree. And as I said earlier, Goblin really liked them. Unfortunately he wanted to touch them which I had to discourage as they are really fragile. 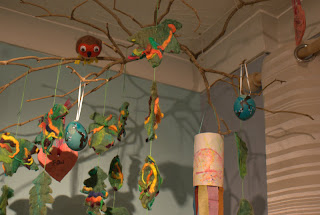 Posted by The Monko at 21:54
Email ThisBlogThis!Share to TwitterShare to FacebookShare to Pinterest
Labels: Mummy's crafts, painting, spring