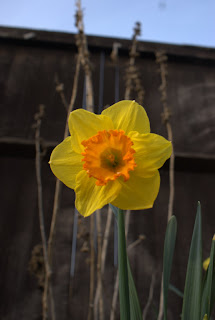 Goblin and I have been planting seeds. I am a very lazy gardener and I don't like the hassle of potting, repotting, transplanting etc. So I picked seeds that can be planted straight into the soil outside and stay there until the plants are fully grown. My rather tiny flower bed is already jam packed with bulbs that Goblin and I planted in the Autumn, so we decided to use some old troughs and a barrel.

The troughs have drainage holes in them and we filled the bottom with gravel and slate from around the garden. Goblin enjoyed scooping the gravel for me. 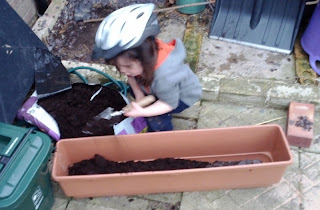 Then he helped to put the potting compost into the troughs. Normally I would have just lifted the bag and poured it in, but I didn't want to spoil Goblin's fun. 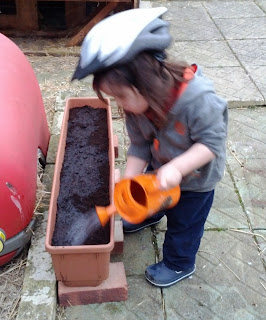 We watered the soil before planting seeds. I should probably mention that gardening is not a particularly dangerous affair chez moi, Goblin does not need safety head gear, its just that he'd been out on his balance bike and refused to take his helmet off afterwards. He wore it until bedtime! I am sooooo not complaining - most parents have the opposite problem. 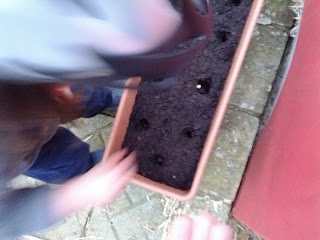 We planted mange tout (little peas in a pod for anyone who is not familiar with the legume). I had thought this would be brilliant one to one correspondence practice because you are supposed to put one pea seed in each hole. Unfortunately Goblin is either really bad at one to one correspondence, or more likely just way to enthusiastic (and not great at following instructions). So we ended up with about 5 seeds per hole - I can always thin them out later. 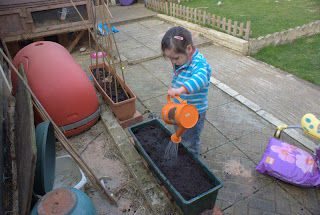 We covered the seeds up with some extra soil and I put some bean poles in - these are mainly to deter the cats from using the trough as a litter tray, but when the plants do grow they can climb the poles. 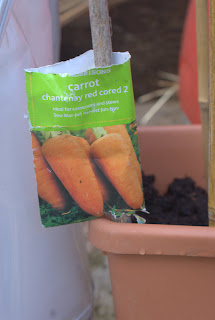 Our second trough contains carrot seeds. I covered this one in a plastic polytunnel - again more to deter the cats while the seeds are germinating. 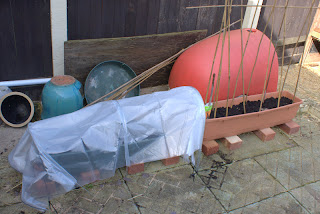 I have an old barrel at the back of the garden that did have a fig tree in. The tree died and the soil in the barrel was old, so I got Goblin to dig out about half a foot of the old soil. And we replaced it with fresh compost. 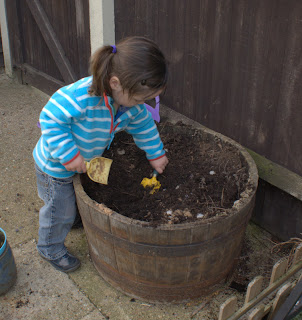 In this barrel we planted sunflower seeds and trailing nasturtiums (both of which are edible - or bits at least). Goblin liked sprinkling the seeds, and because they are big seeds he was able to see where they fell and help me push them into the ground with his fingers afterwards. 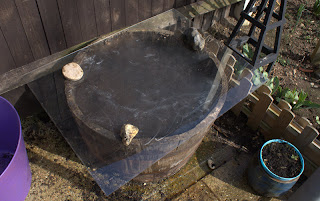 We covered the barrel with an old piece of pyrex after Goblin had watered the seeds. I'll have to remember to get Goblin to water them regularly as they won't get any rain while covered. Kitty was very annoyed that I had covered up his favoured litter tray. 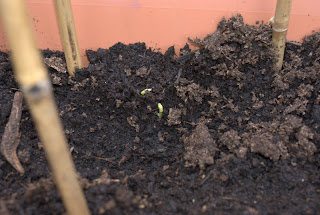 And look at this - I don't know if you can see but the mange tout seeds have sprouted already. two little buds poking their head through the soil. I was a bit worried about showing Goblin incase he tried to pick them immediately, but he didn't. I'm looking forward to watching our little garden bloom, and eating the contents when they are ready.

Posted by The Monko at 13:42
Email ThisBlogThis!Share to TwitterShare to FacebookShare to Pinterest
Labels: 29 months, gardening, nature, outdoor play, spring