(Goblin is 27 months)
Goblin has started to enjoy jigsaws. He has had knob puzzles, like this Melissa and Doug one below, since he was quite young. But he has never really shown much interest in them. If I took one out and encourage him, he'd do it once. But even then he would only match the pictures, he wouldn't take any time to manipulate the pieces into the holes. If they didn't go in first time he just wasn't interested. 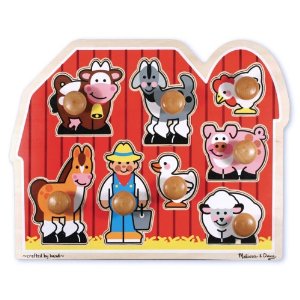 But recently he has shown a great deal of interest in jigsaw puzzles. It started with some two piece puzzles that Bubble's mum bought from Orchard toys. Goblin sat down and did every single one. And he took time to manipulate the pieces into place. 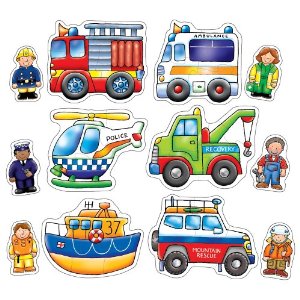 He also enjoyed Bubble's giant bus floor puzzle. The two of them did it together. Then he started doing them at home as well. We have a Hungry Caterpillar puzzle and he started getting it down off the shelf and asking for help to match the pieces. So we bought him a couple more. He now has a digger and an underwater one. 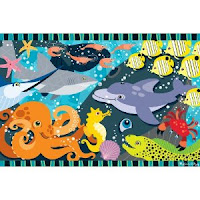 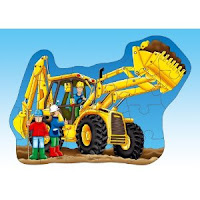 I got an excited email from Hublet the other day to say that Goblin had done a significant section of digger puzzle all on his own. When he has finished the puzzle he says "found the digger". I realised that the reason he likes the jigsaws is because there is an extra achievement. 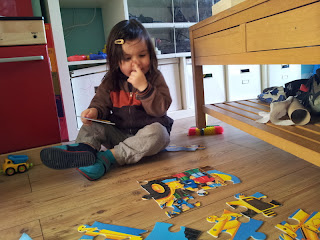 What I mean is, the knob puzzles simply require the child to do a skill - match and manipulate the pieces into place. The only satisfaction is the fact that they can do the skill. I think Goblin needs a bit more than that sometimes. And he gets that with the jigsaws. By manipulating the pieces and fitting them together he gets a reward beyond the satisfaction of being able to do it, he gets to see the final picture. I think thats why he persisted so long with a very intricate wooden fire engine he was given for Christmas. The chunkiness of the wooden pieces made it really difficult to slot the pieces together. 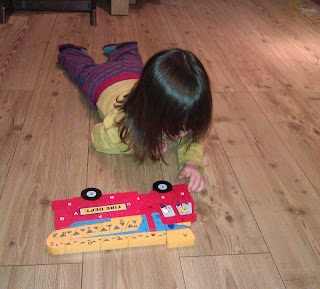 And the edges weren't obvious to use as clues. But he still managed with a bit of help to complete it. He 'found the fire engine' and then played with it as if it was a toy - zooming it round the floor. Then he broke it up and did it all again. Jigsaws are great for so many different skills - manipulation, fine motor, observation, and our fire engine has an alphabet on it so there is letter recognition too. I just have to resist going and buying a ton more, there are so many really great ones out there.

Posted by The Monko at 22:00
Email ThisBlogThis!Share to TwitterShare to FacebookShare to Pinterest
Labels: 27 months, fine motor skills, letters, matching