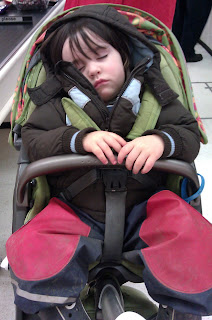 Goblin has invented a new game. I call it 'Hide and Sleep'. I love it.
Goblin asks to "Jump bed" - which means he wants to jump on our bed. Then when he's tucked under our duvet he says "Hide and seek" and points to the bottom end of the duvet. This is his instruction for me to hide under the duvet. He watches me pull the duvet over myself. Then he counts "two, three, two ... two three" and then he starts to shout "mummy, mummy". Sometimes he launches himself onto the duvet and laughs as I let out a loud groan with the full weight of a heavy toddler landing on my tummy. But equally as many times he searches the bedroom and often other rooms. It appears that even though he has watched me hide under the duvet he forgets where I am and starts to look for me. Meanwhile I take a nice long rest under the snuggly duvet -
Best ...  Game ...  EEEEEVAR!

Posted by The Monko at 20:52
Email ThisBlogThis!Share to TwitterShare to FacebookShare to Pinterest
Labels: 26 months, hide and seek, this moment