(Goblin is 23 months)
Goblin was in a really fun mood this morning. He wanted to play all the learning games on the shelves. As soon as I came into the room he brought me the story stones, and the shell jar, tongs and palette. 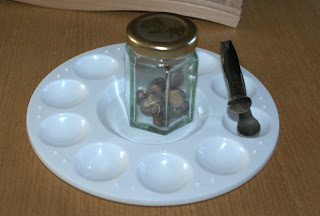 We sat and played with the snail shells for a while. Its great because he gets to practice opening jars, using the tongs and when he gives up using the tongs he still has to use his pincer grip with his fingers to move the little snail shells. He still struggles to use the tongs - which wasn't helped this morning by the fact that he started off using his left hand. He hasn't really settled on a hand that he always favours but I am pretty sure he'll end up right handed as he does seem to do things better when using his right hand.

I was looking for something bigger than mini snail shells for him to use the tongs with so I took down all our jars of things. Goblin opened the jar that holds all the tessellation shapes. So we made patterns. He'd hand me a shape and I'd tell him what the shape was and then place it on the floor. Goblin wasn't interested in trying to tesselate them himself - the shapes are quite small so its a bit tricky - but he liked watching the pattern evolve and controlling the shapes that went into making it. 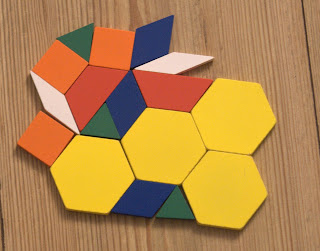 Once he was done with this he helped put the shapes back in the jar - he is getting much better at tidying away before moving to something new. Next he turned to the magnetic letter jar. We had to move Goblin's shelves while we were getting the windows replaced this week. As a result the radiator has been exposed. I showed Goblin how the magnets stuck to the radiator. He really liked this and stuck every last one to the radiator. But it was a bit tricky to make words on the radiator because the letters had to be spaced out between the bumps. So I grabbed our white board which happens to be metal. We must own the only fridge in the world with a plastic door! 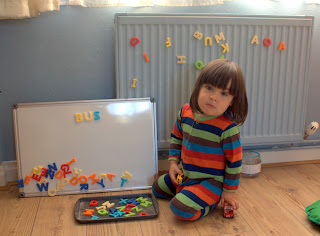 I started to make words on the white board. I'd show Goblin the letters and tell him what they were, then stick them together to make a word. Goblin liked sounding the letters. As he is just learning to talk I guess the distinction between a letter sound and a word sound probably doesn't exist. So he is just as happy repeating a "d" sound as he is repeating the word "daddy". We started with the words "Mummy" and "Daddy". Then Goblin started telling me words to spell out. We did "lorry", "fire engine", and the photo is "bus" for which he got props. My goal here was just introducing him to the idea that letters have sounds and that a mix of letters together can form a word. 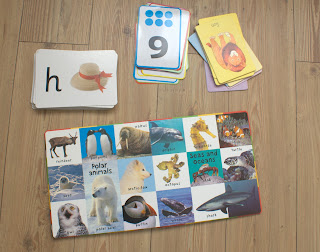 Goblin was on a roll with his vocabulary so I pulled out our flashcards. I have never used flashcards as actual testing cards. I use the number ones for matching games and with the counting fish. And I use the pictures on the animal ones to match with Goblin's plastic animals. But this is the first time we just went through them all and I asked Goblin the name of each thing pictured. I was amazed how many words he knew (he even knew "windmill" athough Hublet and I have no recollection of using that word with him). We got through  all the flash cards and Goblin said "more", so I got out an animal picture book and we went through that too. For those of you whose toddlers could talk at an early age you are probably wondering what all the fuss is about, but Goblin couldn't say any words at all at 18 months (much to the horror of one Health Visitor!). So he's only been talking for 4 months and I am surprised every day at the new words he knows.
One of the flashcards we looked at was the word "hat". Goblin repeated this word so many times that Hublet went off and found our little stash of hats (Nanny bought us some great ones from a charity shop). Goblin of course chose the fireman's hat. For the rest of the day he wore his hat and shouted "Fire engine" intermittently. 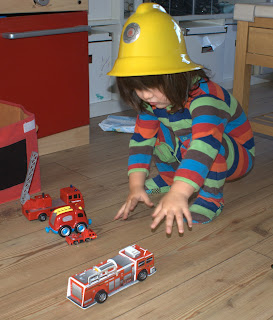 He insisted that we all put fireman's hats on (luckily we have 4 so the rocking horse also got one). And Goblin, Hublet and I sat on the sofa and pretended to drive a fire engine. Goblin steered and made the broom broom noises and Hublet and I did the siren and flashing light which consists of twisting your hand in a circle above your head. This went on for some time. 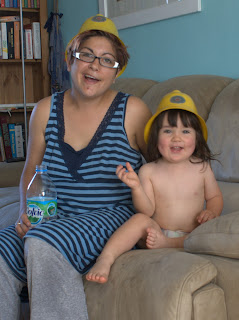 Yes I am in my pyjamas - its Saturday, who needs clothes. You may also be able to see my giant spot on my chin. While I was changing Goblin's nappy today he took a wetwipe and tried to clean it off my face. Bless him, if only it was that easy.