Today we went to Jimmy's Farm (as seen on TV http://www.jimmysfarm.com/).
What a great place for a toddler. The farm and nature trail are free for under 2's and £4.50 for adults which makes it a pretty cheap day out. The whole site is pretty huge. The grassy farm area is very buggyable but the nature trail is not. So we opted for the baby backpack.
Goblin's aunty and uncle joined us on our outing which made Goblin very excited - aunty was also excited and displayed it by buying 6 bags of animal feed - thats a lot of animal feed.

In the farm area there is a playground as well as a chicken safari and the two large heated polytunnels containing butterflies. We stumbled upon a fish pond where a Jimmy's farm worker helps kids to catch fish. This was the most amazing thing. The man casts the rod for you. Then Goblin held the rod and within seconds there was a bite. He caught a tiddler first time round, but on the second cast he caught this rather large fish. In this picture Goblin can't decide whether its awesome or horrifying. 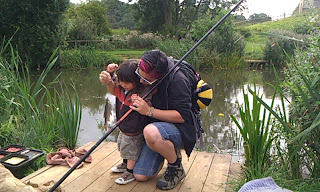 Goblin loves all animals so he was very excited that he got to feed some. Here he is feeding the ducklings with his uncle and aunt and of course the hublet. 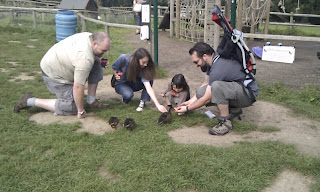 This was going well until the ducks dispersed and the Goblin decided to take chase - fast - right in the direction of the pond, which didn't have a fence around it. We managed to grab him before he took a swim. We headed to the nature trail to let Goblin burn off some steam - and burn it off he did. Here he is hurtling down a hill. 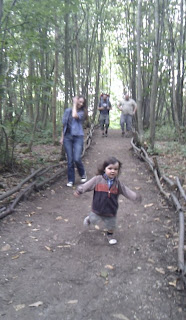 And here he is with his aunty scaring passers. 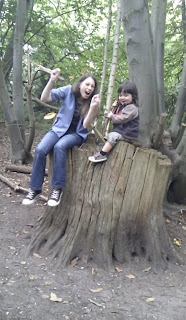 Goblin thought the men folk weren't looking manly enough so he equipped them with sticks. 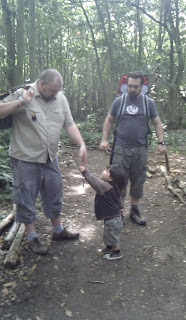 Jimmy's farm has a designated area in the woods for building dens. After lots of building Goblin and aunty sat and drank pretend cups of tea. Then Goblin demanded that everyone went into the den. This was certainly an interesting exercise for our 6 foot plus men folk! 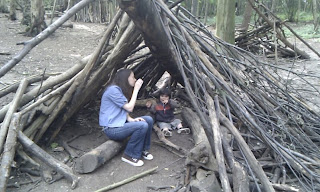 After the nature trail we had lunch in Jimmy's farm's amazing restaurant which has a comprehensive kids menu and high chairs, as well as some stunning food for the grown ups, in giant portions. And when we had eaten our fill we went and fed some more of the animals. The sheep were very friendly. Goblin giggled when they licked the food from his hand. 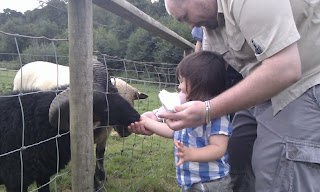 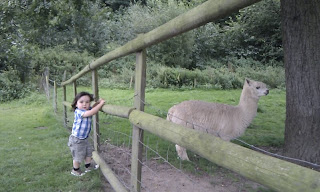 The Alpacas on the other hand were too aloof to be fed.

Posted by The Monko at 21:46
Email ThisBlogThis!Share to TwitterShare to FacebookShare to Pinterest
Labels: 22 months, animals, outings