Walking Nanny and other activities

(Goblin is 23 months)
The other day we went to Nanny's. She lives by the seaside and Goblin loves to go for a walk along the sea edge.

Normally he likes to walk the dog. Nanny's dog is incredibly gentle and compliant. The photo below was taken back in May when Goblin was 19 months old. 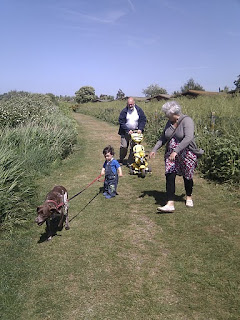 But last week doggie wasn't cooperating and kept trying to walk too fast and Goblin kept dropping the lead. Eventually he got frustrated and upset. So Nanny volunteered to be walked instead. This was very successful. Nanny was a good dog and didn't run too fast. 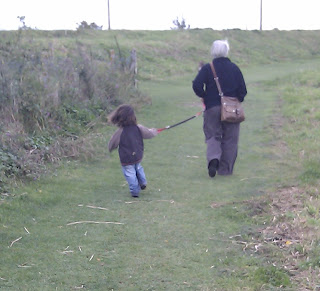 As we passed the sea front the tide was out and Goblin went down to explore the water - in fact he wanted to go wading, but when the sea is out it exposes the mud flats and there aren't enough wet wipes in the world to clean that amount of mud off so we discouraged him. Instead we collected shells. I found loads of little sea snail shells.
I brought them home and sterilised them using boiling water. Then I popped them in a tiny jar that I had bought for Goblin to practice opening lids (something I have since lived to regret). Today Goblin discovered them and spent a while pouring them from one jar to another. They make a lovely sound when they hit the glass. 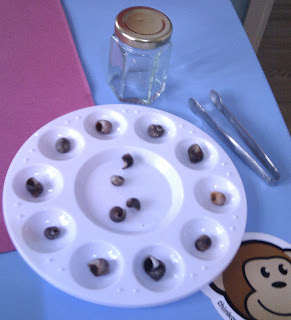 After that I placed them on the painters palette (99p in our odd book shop). Goblin practiced lifting them with sugar tongs and putting them back into the jar. I had read about this activity in a book on Montessori activities. I was quite surprised how much Goblin struggled with the sugar tongs. I had to show him how to hold them. Now I am going to sound a bit thick but I hadn't realised that children would need to practice an activity like using their fingers and thumb to squeeze tongs together. Goblin took to the pingpong ball activity so easily. It didn't occur to me that the big tongs were easier because he used his whole hand. He gets lots of practice at using his whole hand to do things like lift his cup or spoon, so I guess its more natural. 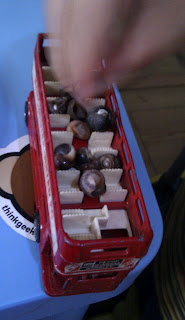 After he'd put some of the shells into the jar he went and got his bus and taxi. He loaded the bus up with shells (using his fingers mainly - but its still good pincer grip practice), and took the shells for a drive.

Then he asked for his animals. The tub sits on the shelf all the time because its so big it doesn't have anywhere else to live. But today was the first day in months that he wanted to play with them. I was really pleased. We got all the matching cards out of his little suitcase and I laid them out on the floor. As you can see some of them are flash cards and some are photos of the animals that I printed out and laminated. When we started doing it we only had a few animals so I just used the flash cards but as the menagerie grew I couldn't find flash cards for animals like our tapir, so I made my own. 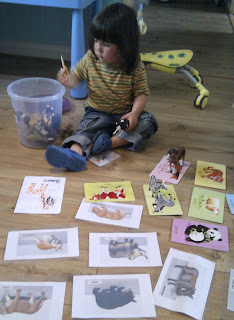 Goblin took the animals out of the tub, named them (which is a new thing) and found the right card for them. He struggles telling the difference between the lion and the leopard but he always gets the tiger right. It surprises me because the toy tiger is white but the flash card I use has a normal orange tiger. He is also happy with the black and white toy cow going on the brown cow flash card.
Some days Goblin will match all of them (there are 20). But today after matching quite a few he started getting bored. So I moved one of the animals onto the wrong flash card and made the sound of the flash card it had taken over. The horse moved to the cow flashcard and said Moo. Goblin thought this was hilarious, and attacked the horse with the cow until the horse retreated to the correct card.  The yak and lion got the same treatment.