[This is a sponsored post. I was given free tickets to Santa's grotto as well as gift vouchers to use in Westfield shopping centre. However the comments and opinions in this post are entirely my own.]

I don't do shopping.  Since we've had Goblin the idea of traipsing around the shops just doesn't appeal. We buy everything online. My friends have stopped asking me where I get stuff because they know I'll say Amazon. We even purchase our groceries on line. But when I was offered £150 spending money to go shopping at the huge Westfield shopping centre just along the train line from our house, I couldn't resist.

Maybe if I was a more regular shopper I would have realised that shopping on the first Sunday in December is insane. The shopping centre, while enormous, was completely rammed. There were so many people that there were pinch points where we came to an absolute standstill and just had to wait until the buggy brigade decided that maybe having a chat outside Primark wasn't the best plan after all. 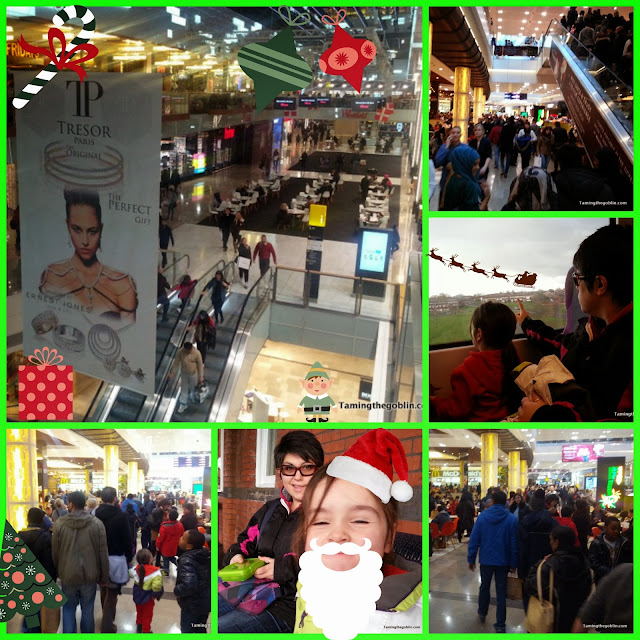 In fairness to Westfield I think this would probably be the same in any shopping centre around Christmas time, and Westfield does try and make it a bit easier. They have some great facilities for parents. While poking around I discovered a dedicated parent room with breastfeeding cubicles, a little lounge with toddler play toys, a huge loo so you can take your double buggy in, and bottle warming and nappy changing facilities. They had even cleverly positioned the exit button for the door at the side on the wall so little ones can't escape while their parents are busy with the baby.

I also liked that you could rent little push along cars for tired kids. We decided against this because the crowds would have made pushing very slow going. But we did take advantage of the play zones. These had also been designed cleverly to corral kids, with only one point of entry/exit. Its just as well because it would be very very easy to lose a child in the shopping centre. We wrote our phone number on Goblin's arm as soon as we arrived and made him hold our hand the entire time, which he didn't like much. 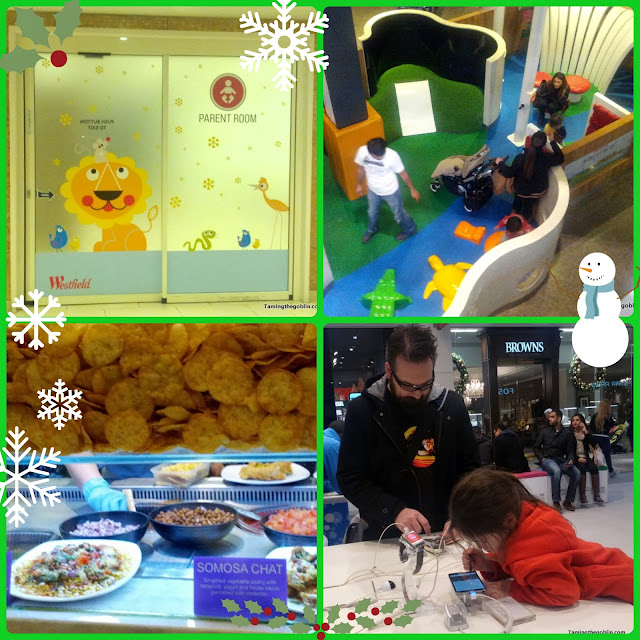 Stratford is an incredibly diverse part of London and the shoppers were a mix of every creed and colour. The Westfield food court had apparently decided to cater for every culture and nationality. There were Indian, Japanese, Mexican, Caribbean, Vietnamese, Chinese food stalls, as well as a plethora of the better known restaurants such as TGIFriday and Pizza Express. Unfortunately our Santa visit went on so much longer than planned that by the time we went to eat most of the restaurants were full and the food court was closing. I'm minded to go back during the week though and take advantage of their late Christmas opening hours. We did get to eat though, we had cupcakes and coffee - mmmm!

If you know my blog you will probably know that we are very honest with Goblin. So we've told him that Santa isn't real (you can find a post about this here). As a result I wasn't sure what Goblin would make of 'visiting Santa', but he was really excited. From the minute we arrived at the mall he was asking where Santa was. 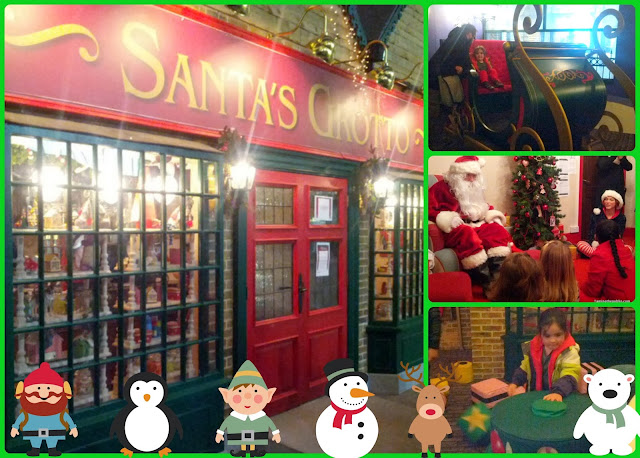 The visit wasn't quite what I'd expected. I thought it would be a quick one-on-one visit. Instead the thing took a whole hour. At our allocated time we entered the grotto with a big group of other excited parents and children (including one that spent ten minutes arguing with Santa's (suspiciously tall) elves about why she should be allowed to take her buggy in - IT SAYS "NO BUGGIES" PEOPLE!). We were held in a play room for ten minutes and then ushered into a 5D cinema where they showed the children a film about Santa's elves.  Hublet was disappointed that there wasn't even a tesseract, let alone any promised 5D objects.  They had however taken photos of each of the kids as we came in and incorporated these into the film so the kids saw themselves, which was cute. Following the film we were guided into a room with Santa.
SANTA!
SANTA!
SANTA!
All the kids were invited to sit in front of Santa, but Goblin was a bit freaked out. He wouldn't leave my side and instead sat quietly observing what was going on. The kids were called up one by one to sit on a stool next to Santa and tell him what they wanted for Christmas. Considering the first lot had to do this in front of a huge bunch of onlookers I thought they were all rather brave. Goblin waited sagely until the very end when the only people left in the room were Santa, the elf photographer and us. Then he sat and had a lovely chat with Santa, telling him he wanted a remote control crawler digger for Christmas, and joking around, before posing for a photo. 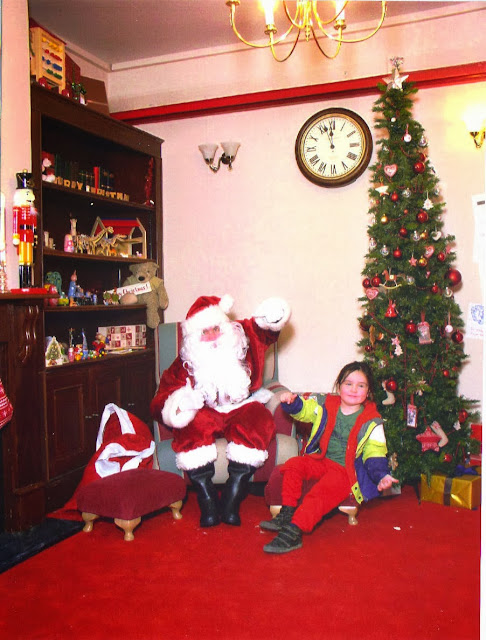 The grotto experience was very well done and the organisation made it feel much quicker than an hour. The only negative was that you weren't allowed to take your own photos of your child with Santa. Instead you had to purchase a photo at £6 a hard copy or £10 for a digital version on a USB (which they had run out of when we were there). And the photo wasn't very professional (I've uploaded a completely unedited version here so you can see what I mean). I could have done better on my phone. Considering you have already paid £12 to see Santa you'd think they could at least let you take your own photo - I'm sure many people would still chose to buy one as well. Despite the quality I totally got sucked in to buying a photo. I was so proud of Goblin for chatting to Santa and wanted to capture the moment. I genuinely hadn't known whether he'd agree to talk to Santa at all. 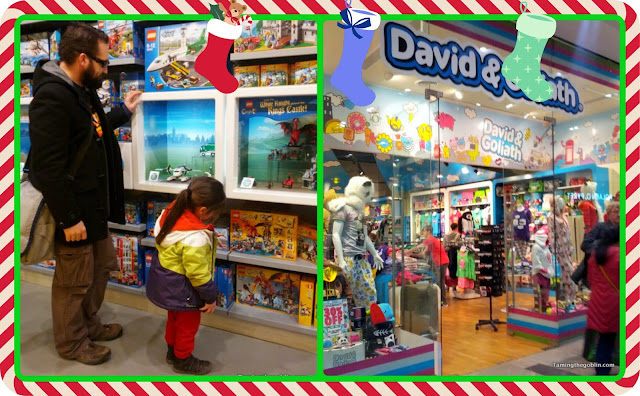 After the grotto we only had time for a couple of shops before the centre closed (Sunday opening hours are only til 6pm but during the rest of the week the centre is open til 10pm). I think my two boys, big and small, could spend an entire day in the Lego store. I nipped into my favourite shop 'David and Goliath' while they browsed the bricks. I got married in a David and Goliath T-shirt so I always love to see their stores but they are quite rare. That is one of the nice things about Westfield, the range of shops tis a good mix of regular high street shops, and unusual ones that you don't find many places. The only problem is the total lack of decent maps in the centre which makes finding your choice shops quite tricky.

Despite the crowds my first proper shopping trip in 4 years was a success. We got some loot and Goblin got to see Santa. If you still have Christmas shopping left to do you could pop along to Westfield. You can find out whats on offer here
/http://uk.westfield.com/stratfordcity/

Posted by The Monko at 20:55
Email ThisBlogThis!Share to TwitterShare to FacebookShare to Pinterest
Labels: 4 years, Christmas, outings