The Sunday Parenting Party - Help! my toddler is hitting

Its time for the Sunday Parenting Party. Please link up your parenting posts and check out some that are already linked up - don't forget everyone loves comments. Please don't link kids activity posts, they can be linked to Kids Coop instead. This week I'm linking the following:
*****
(Goblin is 41 months) 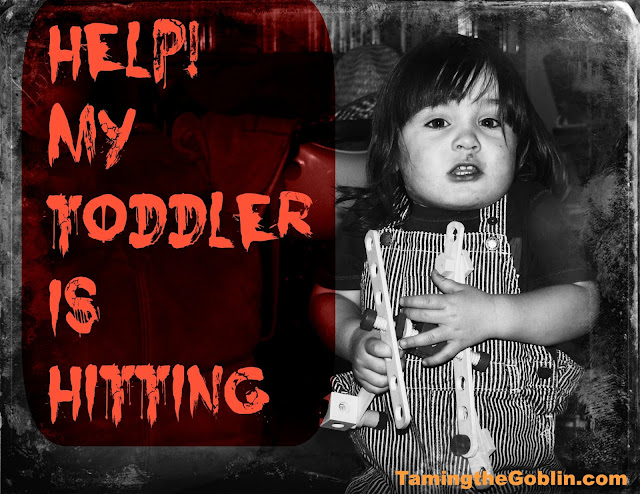 A friend of mine recently posted on Face Book that her toddler had started hitting. So with the benefit of a bit of hindsight, and some help from the fab tribe of the Kids Blogger Network I thought I'd write a post about it.
Now don't for one second think that I successfully applied this advice and managed to get through the toddler years without Goblin ever hitting us, our pets or other children. He went through that phase just the same as nearly every family will, and from time to time we still revisit it - especially at bed times.

When an adult hits another adult it is usually with the intention of causing pain and usually done out of malice (or self defence). We see this symptom in a toddler (the action of hitting) and apply the same cause as we would an adult. We think "oh my goodness my child is being mean, nasty, intentionally wanting to hurt". However, toddlers, especially non verbal toddlers, usually hit out of frustration, sadness, anger and to try and communicate something. If we assume that the child is just being mean we miss an opportunity to deal with underlying issues and to help them learn to deal with emotions. Trying to approach a hitting incident in a calm and compassionate way rather than an angry and worried way will always yield better results. And I know that's easier said than done. So here are some suggestions to help.

Explain that hitting hurts.
If your child has hit another child you can gesture at the crying child and say "look, they are crying, they are hurt, hitting hurts, it is not OK to hit". If they hit you its important to tell your child that they have hurt you. But do it in a matter of fact way, don't pretend cry, faking pain is a lie and its not fair on your child.

Show them what gentle looks like
When Goblin was about 6 months old our friend came to visit with her 14 month old son. Goblin was in the Jumperoo and the friend's child kept going over and hitting Goblin. At the time, as a niaive first time mum I assumed that her child was intentionally trying to hurt my child, but having now been there with Goblin I realise that he was trying to interact with Goblin, but didn't know how to.
Goblin at 14 months did exactly the same thing with our cat. I responded by taking his hand and saying this is how you touch the cat, and I gently stroked the cat with Goblin's hand. It took a long time for Goblin to learn to be gentle.

Set boundaries
I really like the term recommended by Laura Markham "I will not let you hit" . Its not telling your child what they must not do, but instead informing them where you are setting your boundaries.

Preempt likely hitting scenarios and divert
This is easier to do after your toddler has instigated a few incidents. You will start to spot a pattern of when hitting is triggered. Sharing is often a trigger for hitting, so stay close if your child is with other kids who have toys they might want, and if it looks like things are getting a little heated you might need to intervene and offer alternative toys to head off a hitting incident.

Ask why they hit
The instinctive thing to do when your child hits another child is to tell them off. But if your child is verbal and you can squash down that urge and instead ask in a calm non accusatory voice "why did you hit X" you might get to the route of the problem. For example with Goblin, hitting occurs now when there is a sharing issue. As Goblin can now talk I'm trying to teach him to "Use your words and not your hands". He seems to respond quite well when he is reminded to do this, but he is older and hitting is a lot rarer than when he was a non verbal toddler.

Acknowledge the emotion
Its the action of hitting that you don't like, but you need to be careful that in dealing with that you aren't telling your child not to have the emotion that led to the hitting. So you can try "Its OK to be frustrated, but its not OK to hit".

Give your child alternative tools to use
Toddlers, especially non verbal toddlers may struggle to know what is alternative suitable behaviour with which to deal with their emotions or needs. So you might have to suggest some options.
For example, when Goblin was smaller he used to hit when he was crowded by another child. So I used to explain that if he was getting boxed in he could moved to play elsewhere. I also showed him techniques like taking a step back, or turning his head away and putting his hands up (not pushing but delineating the space he needed) - this was before he could talk so he didn't have the option of asking them to move back.
We are currently, as a family trying to help Goblin find an alternative outlet for the frustration he feels when he has to go to bed. It often is exhibited in kicking and flailing. We want him to understand that it is OK, and completely understandable to feel frustrated, but we aren't going to change our mind and hitting or kicking us just makes us sad. We are wondering if he could channel his feelings into hitting his toy instead. I'll let you know if it works.

Offer a break from the situation
I don't like time outs. I don't think little children can reflect independently on their actions. But I do think you can remove your child from a situation where they have just hit someone, and sit them on your knee in a quiet corner or at a quiet table away from other children and parents. Gently cuddle them and explain that "we are kind to our friends" or "if we are nice to people they will want to be nice to us". Often a child will hit because they are frustrated, sad or angry. A little cuddle is a good way to help them calm down and ground themselves before returning to play. It also "Looks Good". If you are being watched by other parents, especially the parent of the 'victim' of the hitting, this option makes you look like you are 'having a serious talk' with your child about their actions, so they feel like you take their child's pain seriously. Obviously its actually none of their business how you deal with it, but it stops the tutting. And that leads me neatly to another issue:

Do you get your child to apologise?

For me there are two types of hitting:
1. Hitting mum, dad, siblings and pets
2. Hitting other kids.
Why have I suggested this divide? Simple, the embarrassment factor. Lets face it, when we are embarrassed by what our child has done - or maybe mortified is a more accurate description - it is much harder for us to keep our cool and respond appropriately. Also when we have an audience - especially one that probably includes the parent of the child who has been hit, we are likely to feel we need to respond in a certain way regardless of what we would do in the comfort of our own home.
I would never force Goblin to apologise if he hit me, I would explain that its nice to say sorry, but I wouldn't insist that he did unless he genuinely wanted to because he felt remorse. However I have fallen into the trap on more than one occasion of insisting that Goblin apologises to friends because it has felt like something the parent has wanted me to do. I don't think a forced apology benefits the child who has been hit or the child who is the hitter. Its just words and if they aren't genuinely felt it is of little comfort to the victim, but also being forced to do something can make an angry child even more angry.  I am currently reading "Peaceful Parenting, Happy Children", by Laura Markham, and she explains that anger sets off fight or flight mechanisms and they get in the way of us being able to listen and absorb information. So trying to explain anything to an angry child is probably futile. Making them apologise coudl make them angry, and then they are deaf to any important information you may want to impart about being kind, using your words, being gentle, using alternative options, etc.
So for me, I might ask if my child would like to say sorry, and I might apologise to the child on my child's behalf. But I try not to get sucked into forcing Goblin to apologise if he doesn't feel it at the time, although I might want to talk to him about what the feelings are that are stopping him feeling regret. (I'm not saying my way is right, its just my opinion. I do understand why some people feel its very important for a child to learn the social norm of apologising and I support their choice too).

We don't tend to do teaching through books in our house. But a book that many of my KBN buddies recommended is Hands are Not for Hitting

(this is an Amazon affiliate link) 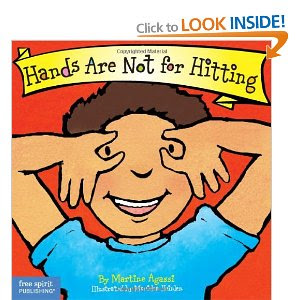 And here are some really great posts that offer some further advice
Learning Empathy ~ My Buddies and I : I read this when Goblin was going through a hitting phase and I found the approach really helpful. Its a good one for when you have "an audience".

How to stop your child hitting ~ AhaParenting

Helping a child who hits ~ Picklebums
******
And my five faves from last week are
Helicopter parenting .....Not! But what about risks and stranger danger? ~ Mum on the Brink
Anatomy of Transition meltdown ~ PricklyMom
Why I use Big words with my kids ~ Parenting with Professor Poppins
Share - the forced politeness ~ Home Grown Montessori
Toilet Learning ~ An Everyday Story

Posted by The Monko at 17:00
Email ThisBlogThis!Share to TwitterShare to FacebookShare to Pinterest
Labels: 41 months, parenting, The Sunday Parenting Party