5 Tips for taking tinies to London 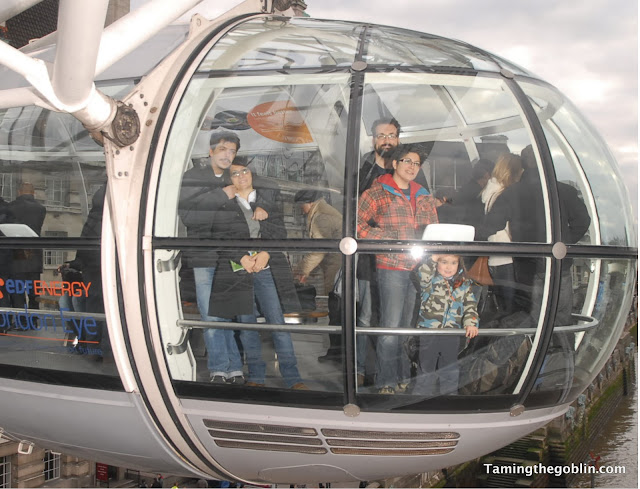 This weekend we took a trip to London. Its not far for us, about an hour by train. We went to see the London Eye. For anyone who doesn't know, the Eye also known as the Millenium wheel, was erected in 1999 to celebrate the new millenium, it is a giant ferris wheel with pods that can hold about 20 people, and it is situated on the South bank of the Thames. Despite Hublet and I both living in London until Goblin was born we have never been to see it before now. 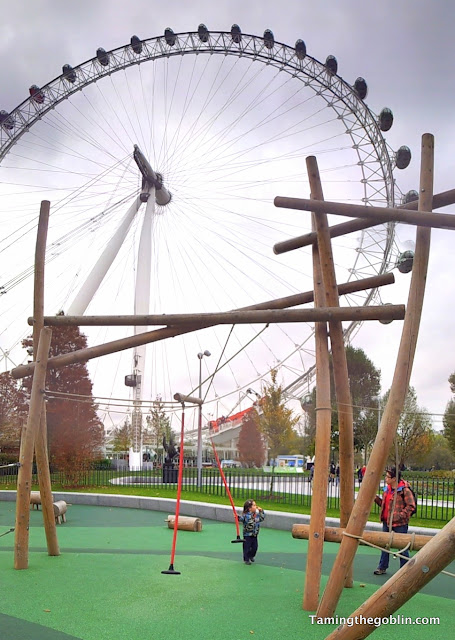 As luck would have it over the summer a company called Superbreaks contacted me and offered me free tickets.
"FREE TICKETS? There must be a catch!"
The catch was to write about the trip. Seeing as I would do that anyway I didn't think that was too much of a hardship so I accepted the free tickets - So this post came about thanks to Superbreaks London Eye package - Thank You Superbreaks. 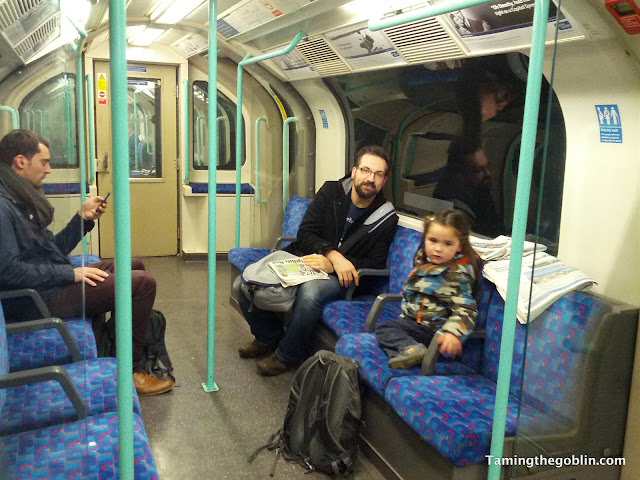 I know many of my friends who don't work in London would think that a visit to "the big smoke" would be a bit scary, especially with kids in tow. So I thought I'd use this post as an opportunity to share some tips that might make it less so.

Hublet, Goblin and I travelled into London after 9am. All overground trains as well as tube trains are totally rammed before 9am and no one is going to thank you for bringing your toddler on the train, let alone a buggy. In fact you'll be lucky to squeeze on a tube with a buggy before 9am. This tip also applies in the evening. No matter how cute your child is, a tired commuters will not agree. Its better to avoid travelling away from London on an overground train between 5 and 7pm. 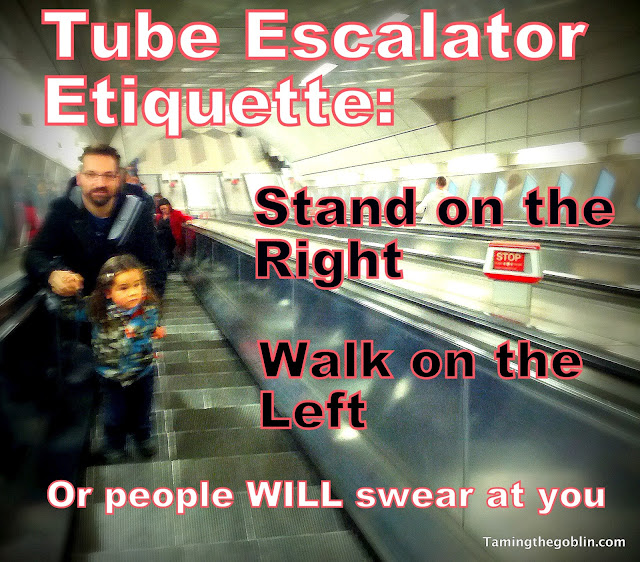 Before we went we planned how we were going to cover every bit of the journey. There are so many travel options in London - underground, bus, ferry and taxi not to mention walking (which is sometimes the quickest option). The TfL website is by far the best way to plan.
Now that Goblin doesn't need a buggy we travel mainly by bus and underground. But when he was smaller I did love black cabs. They aren't as expensive as people think and the glorious thing about them is that you can get a buggy in without having to fold it up.
If you are going to use the tube with a buggy check the tube map. The stations with disabled badges next to them will have lifts and that will make your life ten times easier if you are travelling with a buggy - that said Londoners, despite their reputation, are generally very helpful and if you ask someone they will almost always help you up steps or an escalator with a buggy. The nearest tube station to the London Eye is Waterloo and it has disabled access. 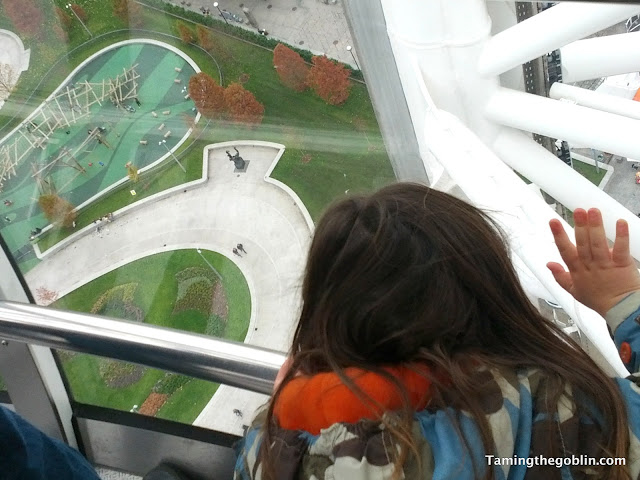 I had a great plan that as well as visiting the London Eye we could fit in a visit to the London Aquarium which is right near the wheel. However, Hublet brought me back to reality. London is pretty exhausting and your children may be overwhelmed. If you take on too much you will be travelling home with a tired and probably miserable person. If you don't go to London very often, and especially if you live far away you might be tempted to do loads of things in one day. But try to resist the urge.
Here is another plug for Superbreaks - they do packages including hotels in London. If you really want to pack more in you could consider an overnight stay.
That said, the South bank is a great place to visit if you have young children. There are lots of family friendly restaurants and street theatre. Between Westminster bridge and London Bridge you can find the London Aquarium, the Satchi Gallery, the London Eye, a playground, the National Festival Theatre, the Tate Modern, the Golden Hinde, and the London Dungeon.
I mention the playground because you might not associate London with open spaces for children but there are some nice ones. The park on the South bank is one, and the Princess Diana Memorial playground in Hyde park is another. Its also worth knowing that the Turbine hall in the Tate Modern is good for running around (and it's free). The Tate Modern also has a free exhibition for kids on the fifth floor which includes a slide that plays music as you go down it. 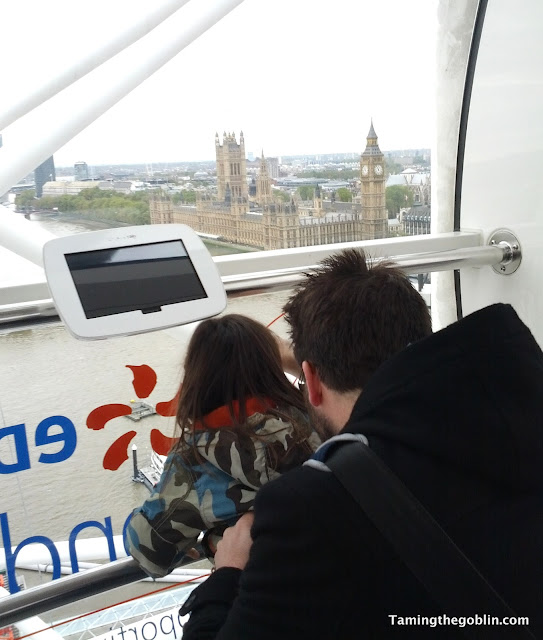 Our "flight" on the London Eye was amazing. Goblin spent the whole half hour staring out the various windows in the pod. We pointed out all the sights we knew - for those who don't know the sites there are touch screen computers in the pods to tell you. You can also buy a circular map which marks everything you can see. I particularly like that the Eye is situated so close to Big Ben and the Houses of Parliament. They really are spectacular buildings and you get a fantastic view form the pod. 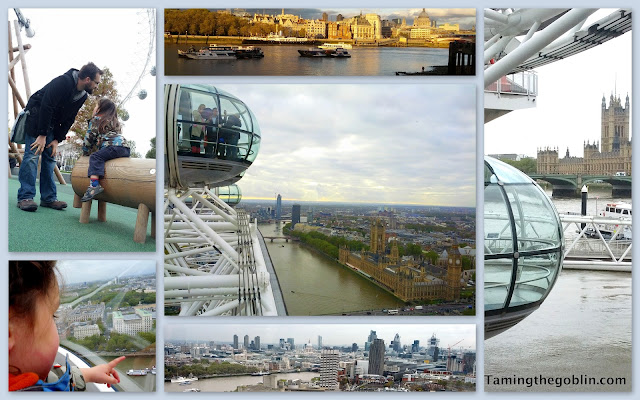 Tip 4: Write your phone number on your child's arm in permanent marker


I can't remember where I read this tip but it is a good one for going to any crowded place. You write your phone number on both your child's arms in permanent marker and explain to your child why you are doing it "in case you get lost". Then if your child does get lost they can at least show someone their arms and say - this is for when I get lost. Most adults will know to phone the number even if your child can't tell them its a phone number.

Tip 5: Don't be scared to walk

As well as the obvious attractions in London there are loads of unadvertised treats that you will only find if you take the opportunity to wander around. With such good public transport, if you detour away from your planned destination you can always hop on a tube or bus or get a cab back to where you need to be. And people in London love giving directions. Here are a selection of the things we found just walking back from the London Eye along the South Bank. 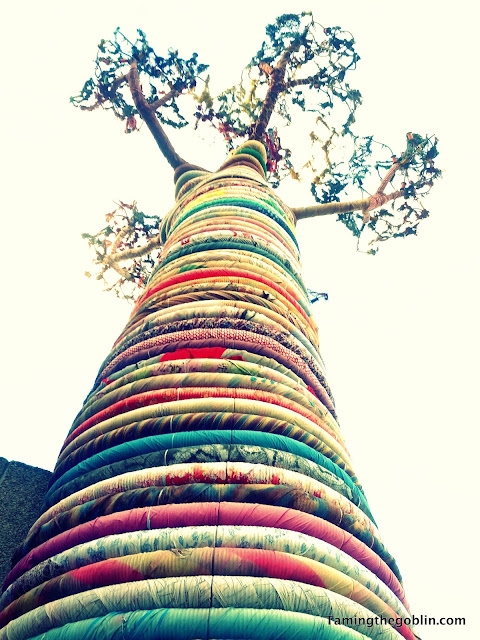 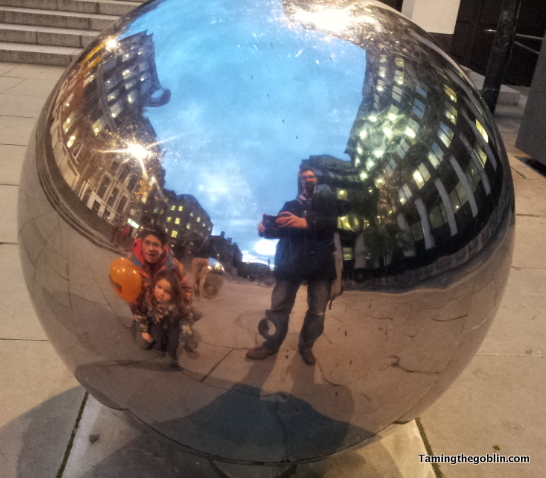 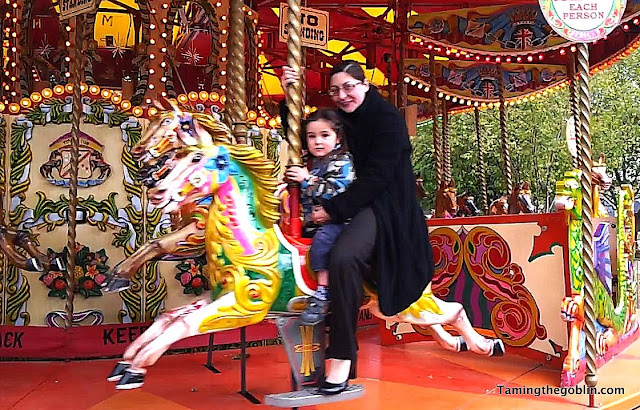 This last one is with my sister who came and joined us for lunch.

As I said at the top of this post, our tickets for the London Eye were paid for by Superbreaks. They do a range of London offers here and I think its quite a good way to 'do' London if you are unfamiliar with the city.

Posted by The Monko at 18:00
Email ThisBlogThis!Share to TwitterShare to FacebookShare to Pinterest
Labels: 36 months, outings, parenting