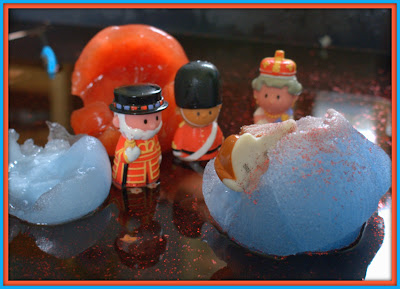 I have to admit I have been a little bit "Bah Humbug" about the whole Jubilee thing. I'm not anti the Royal Family, its just that 60 years of someone being the Queen doesn't fill me with excitement and the need to rush around having tea parties and hanging bunting. That said I thought I ought to at least make an attempt to keep up the Brit blogger appearance and do a Jubilee related activity. As its been beautiful weather all week I thought Goblin would enjoy some outdoor ice play. So in a Starwars 'Empire Strikes Back' moment I decided to encase the Royal Family in Carbonite (ice) for Goblin to rescue. My idea was a combination of two posts I saw on the blogosphere - the first about coloured ice from Hurrayic and the second about soap dinosaur eggs from Red Ted Art. 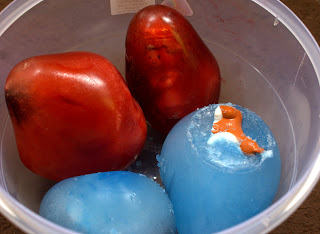 inside. Now I made that sound super easy. But believe me it wasn't. I didn't use water balloons that stretch with the weight of water, because I didn't want them to pop in the freezer. So I used regular balloons. These didn't stretch when I stuck the water in, not even the pressure of the water from the tap would inflate the balloons past their unblown-up state. So I had to "Science that Bee-atch" as they say (actually maybe its only me and Hublet that say things like that). I blew up the balloons and while holding the neck of the balloon shut, stretched it round the top of a bottle filled with the coloured water. Then I turned the bottle upside down and let the air in the balloon displace the water in the bottle - SCIENCED! 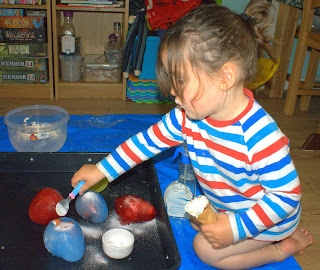 Of course being a British bank holiday, rather than beautiful sunshine it is tipping down with rain. So our ice play was done indoors. I provided a spray bottle full of warm water, two bowls of salt mixed with red glitter and a jug of hot water for Goblin to pour on the Ice eggs. 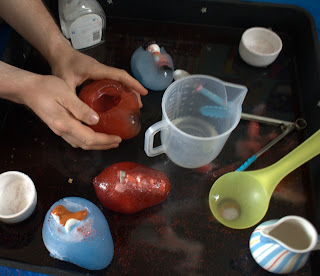 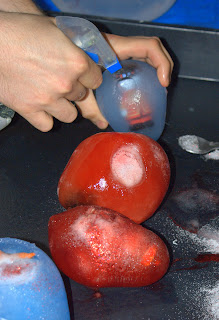 Hublet decided it was his mission in life to free the beefeater by spraying the egg at close range with warm water. It made some cool holes in the ice. Goblin chose salt as his weapon of choice but soon discovered that it was really slow working so he moved on to jugs of warm water. 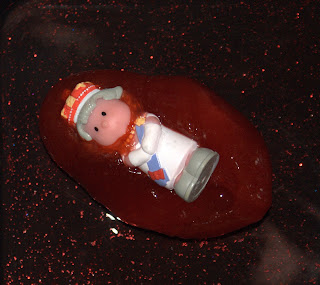 Goblin worked on freeing the Queen (in time for her Jubilee Flotilla). He was quite excited as she emerged from her carbonite ice egg. Hublet and Goblin worked away side by side for some time, 'sciencing' the ice into submission. 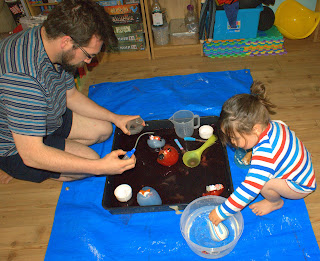 Finally all the humans had been freed and they waited anxiously to see if the Corgie would make it! 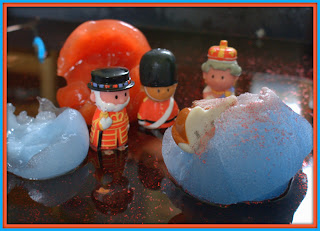 If you aren't from the UK or the Common Wealth you may be wondering what on earth this post is about. For more information on the Queen's Diamond Jubliee you can check out the official website http://www.thediamondjubilee.org/

Posted by The Monko at 12:12
Email ThisBlogThis!Share to TwitterShare to FacebookShare to Pinterest
Labels: 31 months, open ended play, pouring