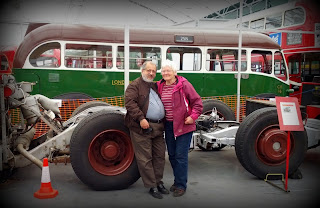 This weekend was Grandpa's birthday (my Dad). He has always been into cars and motor sports so we went to Brooklands Museum "the Birthplace of Britsh Motorsports and Aviation" for a family outing. I didn't know how much there would be for Goblin to do at a museum and I was a little concerned that he'd get bored. I needn't have worried. 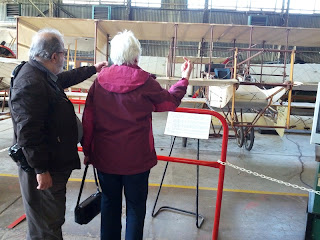 The Museum is set out in a series of hangars and buildings. The first one we visited had old planes in it. Granny and Grandpa were fascinated by this really old plane made out of what looked like waxed paper. It was huge and the propeller was positioned behind the seat so it pushed the plane along rather than pulling it. It was a really strange design. 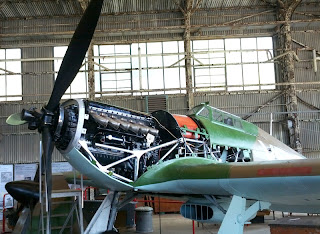 When Grandpa first came to England from India he worked as an apprenticeship building aeroplane engines - one of the ones he worked on can be found in the Science Museum in London (how cool is that!). There were some truly amazing pieces of engineering on display and I was fascinated. Goblin was not so fascinated and ran through the hangar pretty quickly missing some of the more beautiful pieces.

But we did manage to show him this Wellington bomber. Granny remembers these flying over her house in Scotland when she was a child. The one on display crashed into Loch Ness, so it could actually have been one of the ones that flew over her house. 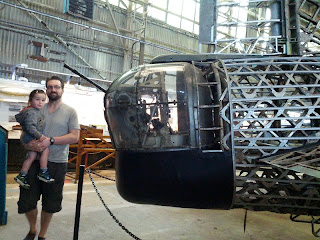 The panelling had been removed to show the skeleton of the aeroplane. It was phenomenal. 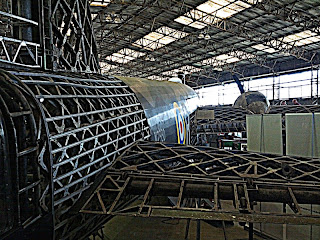 Goblin wasn't very interested in the old planes but he did like going inside the modern aeroplanes. He wanted to go in all of them, even the ones that didn't have steps. One of the planes was hilarious. It was donated by the Sultan of Oman and it had a gold velvet covered toilet and double beds with seat belts attached across the bed. 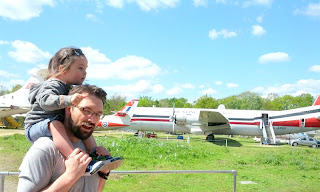 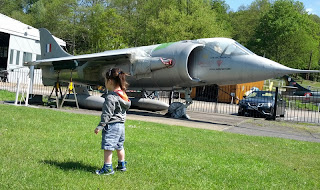 While Granny and Grandpa seemed enthralled by the aviation hangar, Goblin seemed to be more at home in the bus hangar. 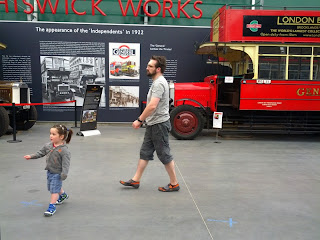 Especially when he found a bus drivers seat to play on. 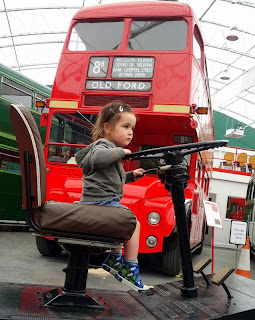 Grandpa seemed to like it too, They played for ages with Grandpa doing the peddles because Goblin couldn't reach. 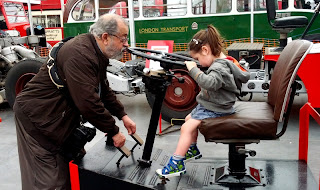 And finally the bit that Grandpa had been waiting for. We went to see the cars. Goblin got to sit in a Formula one car. I think Grandpa was a bit jealous because he couldn't fit in the seat. 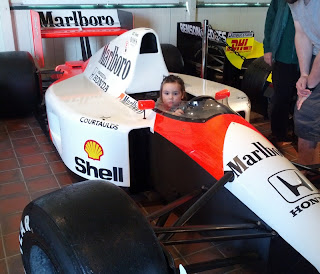 Before going home Goblin and I did a bit of spinning. Despite the fact that I know I get really bad motion sickness in cars, trains, planes and boats, and even feel ill if I go on a roundabout, I somehow concluded that this was a good idea. I was so wrong!
Today is Monday, two days after this spinning activity and I am still suffering from waves of nausea. So my advice would be, if you suffer from motion sickness let your kids spin on their own.


I will be sharing this on

Posted by The Monko at 22:47
Email ThisBlogThis!Share to TwitterShare to FacebookShare to Pinterest
Labels: 31 months, outings, vehicles