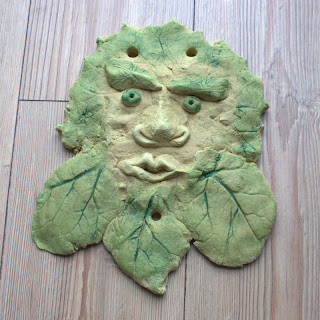 Tuesday is the 1st of May: May day and the pagan festival of Beltane. I decided to do some May Day activities with Goblin. I wanted to paint us both green and make flower and vine crowns - but its been raining hard all week which put a bit of a damper on that plan. So instead I decided to make a Green Man plaque from salt dough. 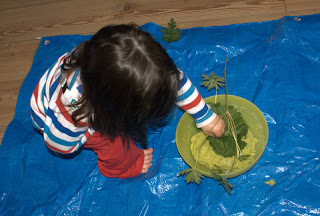 The idea was that this would be an activity for Goblin. But as soon as he touched the salt dough he decided that today was going to be a clean hand day. Goblin isn't usually fussed about getting his hands messy but some textures seem to freak him out a bit. Today the salt dough was doing that. So I made the green man on my own. 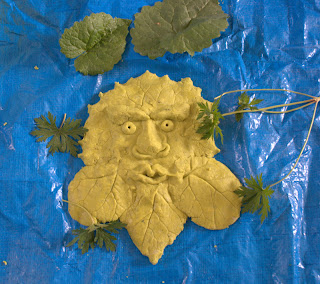 Salt dough is 2 cups flour, 2 cups salt and one cup water ( I used half a bottle of green food colouring in the mix as well). I pressed leaves into the dough to make leaf patterns around his beard and hair. Once I'd finished it I baked him in the oven at 100C for 8 hours. No you did not read that wrong, it took 8 hours to dry the dough out so it was rock solid. Then I rubbed some green acrylic paint into the veins of the leaves and wiped it off with a baby wipe to darken the edges. 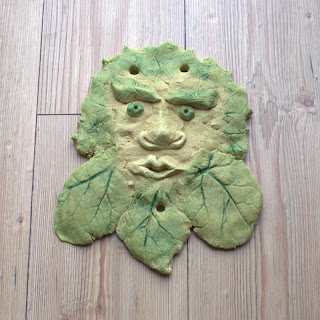 I really like my green man. I think I'll varnish him and try hanging him in the garden. I don't know how weather worthy he'll be, but thats quite appropriate as part of the Green Man story, old Jack-o-Green dies and is born a new each year.

Posted by The Monko at 11:52
Email ThisBlogThis!Share to TwitterShare to FacebookShare to Pinterest
Labels: 30 months, Mummy's crafts, salt dough