(Goblin is 29 months)
Goblin has been ill since Friday, and to make it worse, so have we. All three of us have had the most horrendous cold. We all had temperatures around 40C (104F) and nasty coughs. I rattled when I breathed and fell asleep involuntarily in the middle of the day - which is somewhat problematic when you are supposed to be looking after a toddler. Fortunately Hublet managed to stay awake shivering on the sofa with Goblin, while he watched all 4 series of "Something Special" (Mr Tumble DVDs)

on loop. Most of the time Goblin was feeling as rough as we were, so didn't need to be entertained. But there were moments when the Calpol kicked in and he got a little bit of energy. That is when I needed something that he could do to basically entertain himself. 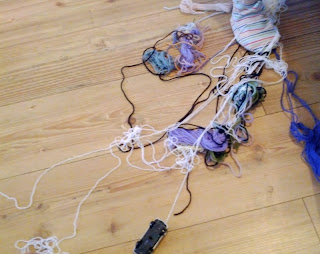 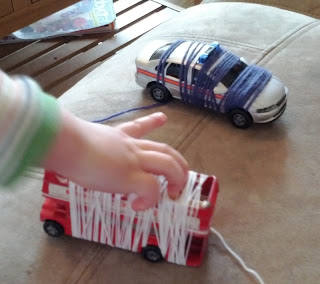 I brought down a bundle of big and small balls of wool for Goblin to play with. I wrapped one of his cars in some wool. 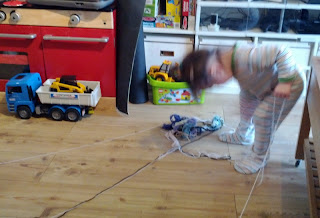 This intrigued him and he brought me his bus and asked me to do the same with that. He spent ages playing with the wrapped up bus, and with the other random bits of wool. He got himself very tangled up but seemed to enjoy the challenge of having to untangle himself. Although he did have to come and seek help on occasion. (One note of caution: on a couple of occasions Goblin wrapped the wool around his neck. He was fine but it did make me realise that this activity should always be done under supervision). 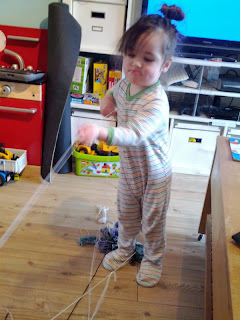 After our family trip to the doctor, Goblin used the wool as a pretend stethoscope and listened to Hublet's chest. This is so cool. I read in Lawrence Cohen's book "Playful Parenting

", that it is good for kids to play out experiences like trips to the Doctor. It can help them understand the experience and regain some power if they felt scared by the experience (For example Cohen says that if the Doctor gives them a jab and it hurts, the child can feel empowered by playing the Doctor who gives the injection rather than the child who receives it). 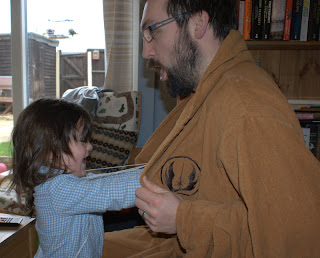 I don't think Goblin was scared by his visit to the Doctors, but the stethoscope obviously made an impression because he enjoyed playing this game for ages.