(Goblin is 28 months)
Today I took the day off work so I could go and observe Goblin at nursery. They only do half day 'viewings' so I had the rest of the day off. I had planned to watch some really bad TV and sleep, but instead I started obsessing over Goblin's shelves - I haven't rejuvenated them in a while because he's been so into his trucks, rainbow rice and painting that they haven't got a look in. 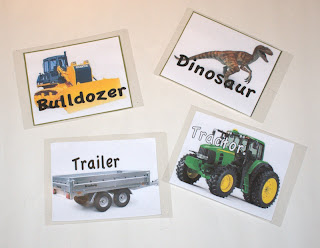 I was excited by Goblin asking for me to draw letters in the shaving foam at the weekend. So I thought I'd do a bit more letter work, but using things he is already interested in. So I laminated pictures of things beginning with B, D and T. I basically chose the letters that had the most amount of vehicles words associated with them. 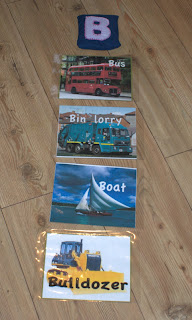 So B is Bus, Bin lorry (sorry US readers you won't be able to use that one), Boat and Bulldozer. D is Dumper truck, Digger, Dinosaur and Dog - I thought there were more vehicles beginning with a D but then I couldn't think of any. And T is for Tractor, Trailer, Tank and Train (although I also had Tanker and Truck which I may yet print out if this turns out to be a popular game). I have picked out B, D and T from the home made letter bean bags so Goblin can line up the vehicles under the correct letter. I expect this will be beyond him, but even if I have to tell him the right letter I can point out the matching opportunity with the first letter of each word. 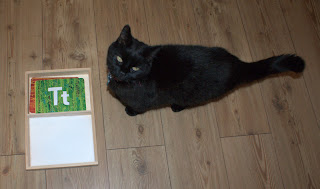 I also thought I'd try the salt tray mark making again - if I can stop kitty trying to use it as a litter tray. They had one at Goblin's nursery and the two year olds were encouraged just to play in it with tools. I think this is a great idea, but it won't hurt to show him that you can make a letter shape. I used sugar rather than salt this time, mainly because I don't want Goblin eating a bunch of salt (yeah I know eating a bunch of sugar isn't great either - I have odd logic sometimes). 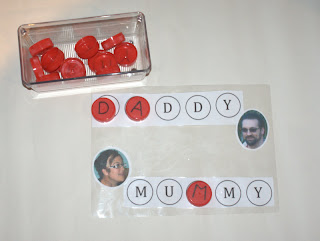 I've put the bottle top letter matching back out. Last time this was on the shelves Goblin just threw the bottle tops around the room and wasn't at all interested in matching. We'll see how it goes. 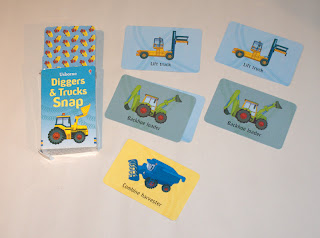 He loves his Usborne Trucks and Diggers Snap

and seeing as we are trying to match vehicles to letters I thought this would compliment it quite well. We play two games with these, one is simple matching and the other is the memory game where I lay out about 6 pairs upside down and he has to find the matching pairs. I was surprised how good he was at this last time we played. 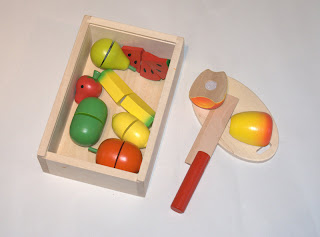 We haven't had the Cutting Fruit

out for a while. I'd like Goblin to learn to use a knife so he can do more in the kitchen, and this is nice safe practice which I don't need to keep a continuous eye on. 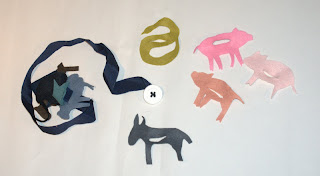 Goblin has NEVER played with the button snake I made him. I have had it out on the shelves so many times, I even rejuvenated it by cutting the squares of felt into animal shapes and he still ignored it. I'm going to try again - ever the optimist. Buttoning is actually really difficult. I hadn't thought about it until I tried to show Goblin, and then I realised you need both hands and quite a bit of coordination which may be why he shuns this toy. 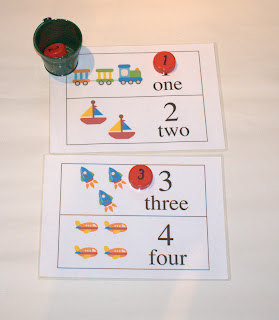 Finally some simple number matching using some printables I laminated ages ago. I feel very guilty because I can't remember which blog I downloaded these from. I thought it was 1+1+1=1 but it doesn't have their watermark on it. If this printable is from your blog please let me know so I can link to it.