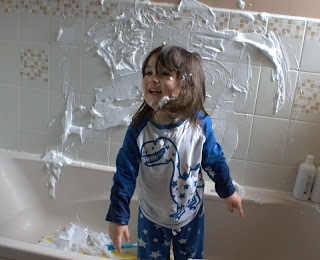 We had some more letter fun today. I am trying to sneak letter play into our other activities from time to time just to give Goblin a bit of exposure to letters - or 'A, B, Cs' as Goblin calls them. But nothing heavy or classically academic. The idea is only to help him gain an interest, I don't want to pressure him to learn at a pace that's faster than what is right for him. 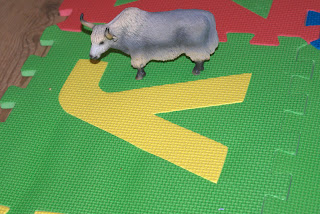 To start we did our alphabet floor puzzle

. I laid out three letter squares at a time and asked Goblin if he could identify one of the letters. He managed to recognise a W when it was beside a Z and a Y, but he couldn't do any of the others.  I was surprised he didn't get the M because I thought that was one he recognised.

Once we'd put the puzzle together in order (which was pretty much all me - although Goblin did sing the alphabet song while I was doing it), I took out the letters from a few of the squares and asked Goblin if he could name the letter and find the hole it fitted in. He couldn't name the letters but he managed to find their holes through a process of elimination. This is still good because I get to talk about letters with him, even if at the moment I'm doing most of the 'running'. 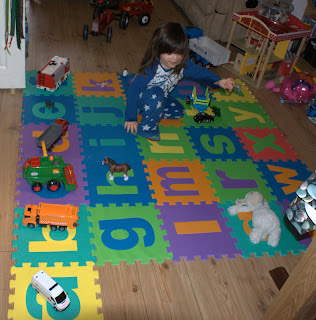 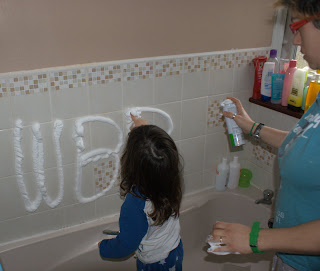 Later I decided to put into practice some of my tips on coping with messy play and test myself with my play material nemesis - Shaving foam. Goblin was already covered in chocolate from an ice cream he'd tried and failed to eat earlier, so I figured we'd play in the bath and then I could just shower everything down. 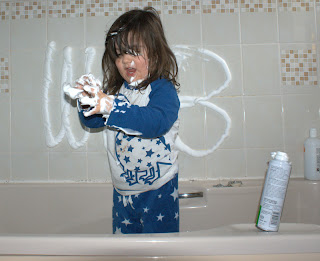 I started drawing on the walls with the shaving foam and Goblin started asking for letters. I was quite excited because this obviously means he actually enjoys our letter play rather than just tolerating pushy mummy's obsession. He asked for a W, B, P and S. And then the number 3. Which amused me because when we played with counting fish later in the day he couldn't identify a number 3 so he obviously knows the name, but had no idea what shape he was going to get when asking for it. 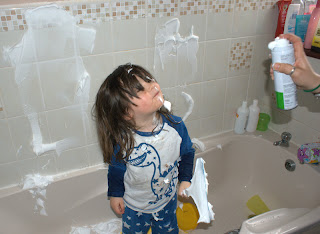 And I can happily report that doing shaving foam in the bath was successful. No stress and very little uncontained mess.