Baking with the boy - Easter Biscuits 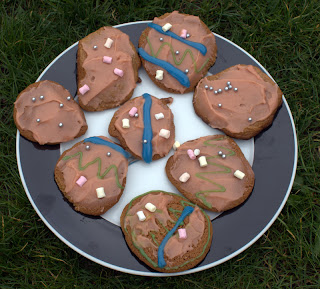 (Goblin is 29 months)
Hublet normally does baking with Goblin but he was away on a stag do today, so Goblin and I made biscuits. We used our standard gingerbread recipe:
350g/12oz plain flour
1 tsp bicarbonate of soda
1.5 tsp ground ginger
125g/4oz butter
175g/6oz brown sugar
1 egg
4 tbsp golden syrup 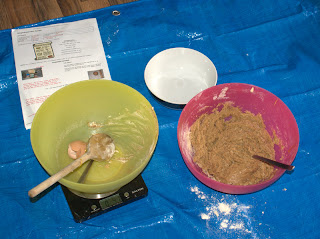 Goblin is getting quite good at

a) waiting until I say before trying to add an ingredient, and
b) only adding the amount I say we need.
We had some interesting interpretations of the recipe when we started out on our baking escapades, and I would never have dared to put all the ingredients down on the mat, because he would have grabbed at them as soon as they were in front of him. Its nice to see progress in following instructions and patience. 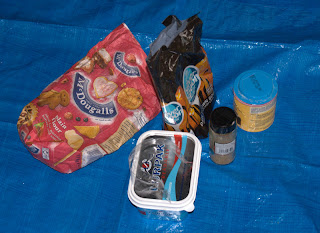 We did put a bit too much golden syrup in (because its sticky and runny and hard to measure). So the mix was very wet. Usually I add a lot more flour to make it rollable, but today, instead of adding flour we just took blobs of the mixture and popped them straight onto the baking sheets - this is actually a lot more doable for Goblin, than trying to roll the mix and cut with cookie cutters. And when the blobs melted they formed nice roundish easter egg shapes. 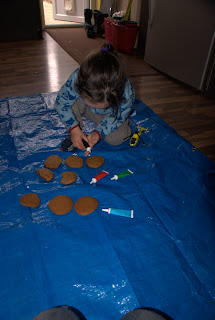 The biscuits cook really quickly - 15 mins on 190C (375F, gas mark 5). Once they had cooled Goblin wanted to ice them. He'd actually wanted to ice them before we made them - the icing was the first ingredient he retrieved from the cupboard. 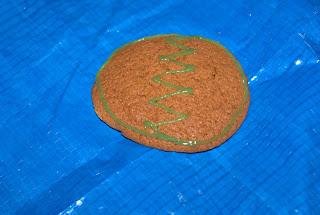 I'd bought some icing tubes. I was able to decorate using them but Goblin found them too stiff. After letting him struggle for a while and when he'd eating half the tube, I decided to snip off the other end making a bigger hole that was easier to use. 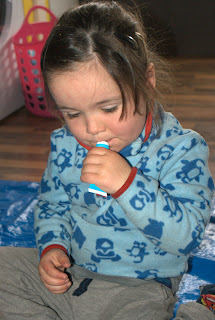 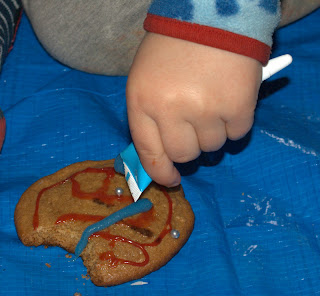 We also found some yummy fruity icing that Hublet had made earlier in the week. So we spread some of that on the biscuits using knives. This is something Goblin has been practicing with spreading butter on his toast in the morning, so he was pretty good at it. 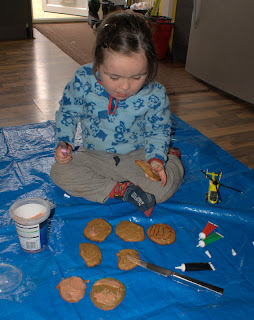 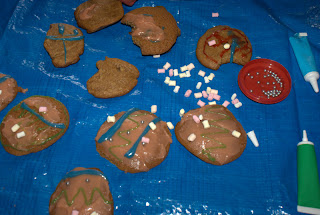 But we did manage to get a few good ones for Hublet when he gets home. 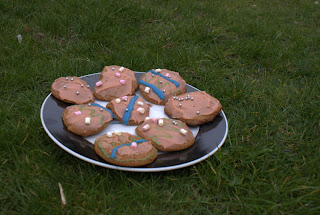 Posted by The Monko at 21:35
Email ThisBlogThis!Share to TwitterShare to FacebookShare to Pinterest
Labels: 29 months, cooking, spring