(Goblin is 28 months)
Today was definitely a sensory play day. I didn't intend it to be, it just was.

We started off doing some painting. Goblin is still totally obsessed with vehicles which means every activity needs to involve trucks. So after I got the paint out for him he filled his dump truck with paint, then dumped it out onto the paper and drove through it. This was very much a Goblin led activity - I had no intention of painting with vehicles, but it turned out looking cool. 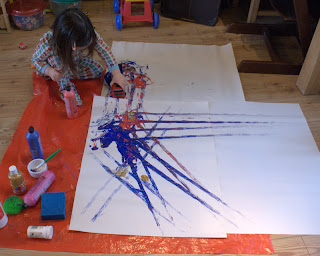 And the painting with trucks led to our second activity of the day which was washing the truck. 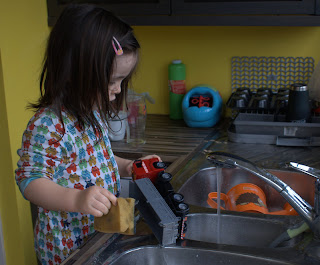 This led to getting very wet which was a good trigger for having a shower and getting dressed - we have no real morning routine so unless we are going out Goblin and I quite often stay in our pyjamas until lunchtime, so getting dressed at 10am was impressive for both of us. 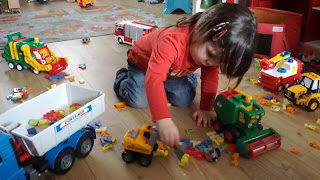 . Its fantastic and obviously all Goblin wanted to do was play with it. But I was quite excited by what he did. He took out magnetic alphabet letters and emptied them all onto the floor. 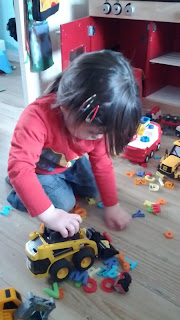 Then he used his skid steer loader to lift them into the container truck. In fact he started to use all his vehicles - he used the combine harvester to sweep them into piles, and the bin lorry he used like a digger to collect letters. 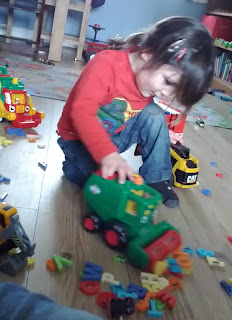 It occurred to me that through this play he was learning so much coordination and he was making a plan and following it through. I have never really been one for sensory bins. They look pretty and I admire them on other people's blogs but I have never been bothered to make one myself. But this activity was a bit like a sensory bin. All the equipment was piled together and Goblin was making his own activities from it. 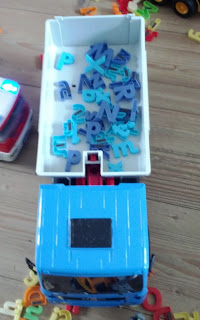 At one point I tried to steer the activity by encouraging Goblin to sort the letters by colour. But he wasn't interested and I rapidly abandoned it, seeing that he was getting much more benefit from what he was doing for himself. 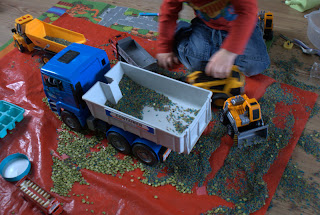 Goblin switches activities quite quickly sometimes and before I really notices he'd moved on. Keeping the theme of filling his dumper trucks using his diggers and loaders. But this time he asked me to get down the red mat and he took out the split pea pot and the rainbow rice. For the first time since I made the rainbow rice in six months, Goblin mixed the rice with the lentils. It was always going to happen, I'm just amazed it took this long. 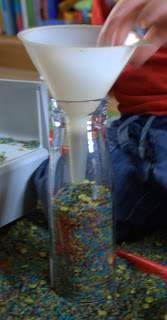 I was really surprised at the focus and length of time he dedicated to playing with the rice and peas. He asked me to get him some spoons and I lay down on the floor with him and used a teaspoon to help shift rice from the floor to one of the dumpers. It was strangely satisfying - I got a brief insite into why Goblin likes it so much. 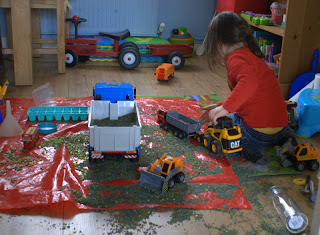 Hublet discovered the other day that the cement mixer has an Archamedes screw in it. Goblin loves this and he spent a long time filling the mixer up and then turning the drum and watching the lentils and rice pour back out of the tube. 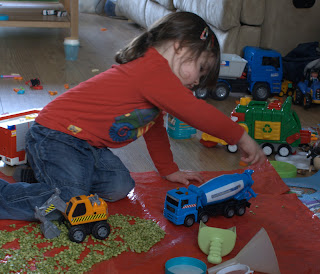 Although it looks like a horrendous mess it actually didn't take very long to clear up afterwards - which is just as well because today Goblin decided not to nap (he usually has at least one and sometimes two hour and a half naps in the day still).
So while I tidied up I encouraged Goblin to play in the garden. 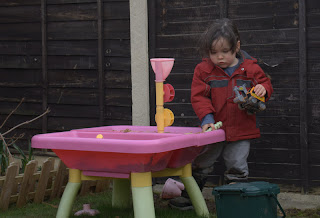 He adores the sand pit and will dig in it for ages - note he took his diggers out with him. 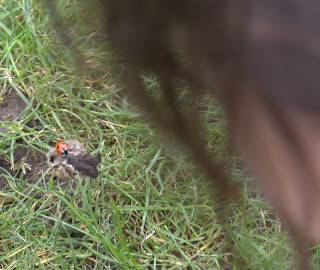 We found a ladybird! 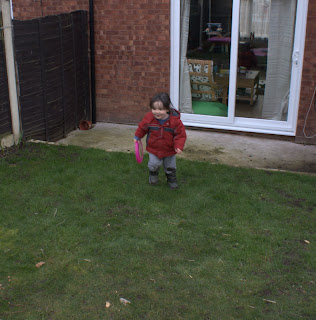 I was hoping to tire him out with a game of frisbee. Playing with Goblin was a bit like playing fetch with a dog. I'd throw the frisbee and he'd run and get it and bring it back. I did try and show him how to throw it but he seemed to prefer the running back and forth across the garden. He does love to run. 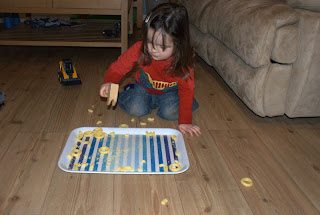 Later in the day Goblin found a wooden hammer. He started bashing things and I panicked that he'd break something important - especially as his lack of naps had made him slightly less responsive to the word 'no' (and considering he isn't particularly responsive at the best of times you can probably understand my panic). I found some corn rings in his snack cupboard. I lined them up on a tray and let him do his thing. 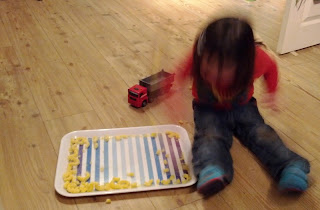 He loved it. We got through two big bags of corn crisps. They made a huge mess but it was so much fun. And Goblin ate a lot of the mess anyway. 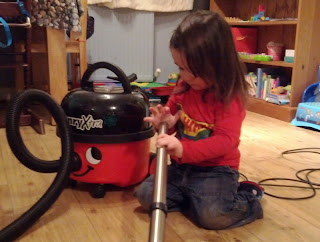 While helping me clear up he enjoyed the sensory experiences that come from playing with a hoover. He got his hair stuck in it and stuck it to his jumper and of course no sensory experience is complete without putting it in your mouth! 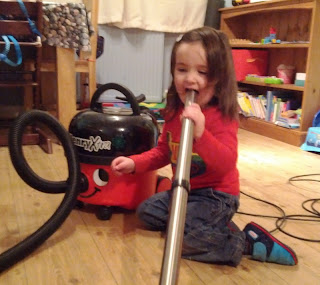