The most recent craze for toddler craft on the blogosphere is collage with sticky back plastic (I think in America its called contact paper). I thought I'd give this a go with Goblin. 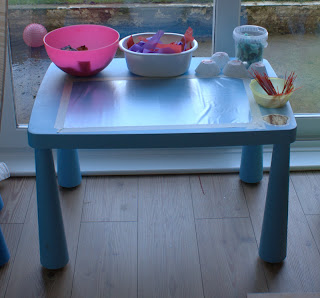 I laid out all the 'ingredients' while Goblin was napping, and taped some sticky back plastic to the table - let me tell you this is not an easy thing to do. I used masking tape and I left the backing paper on while I taped down the first side. Then I stretched it out and taped the corners on the other side. Then I tore the backing paper off the edge with just the corners taped down, and rolled the backing paper back. I taped the top and bottom down with long bits of tape, then I pulled the final bit of backing paper off (which took the original masking tape with it). Finally I taped down the original side.
I am so glad I did this while Goblin was asleep, I imagine it might have been a bit stressful if Goblin had been leaping round excitedly trying to stick stuff to it. 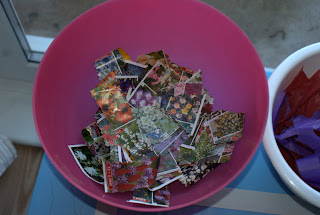 My ingredients included - cuts up pages of a seed catalogue (which are great because they have flower pictures on both sides); 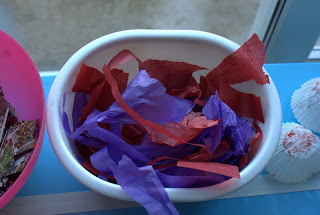 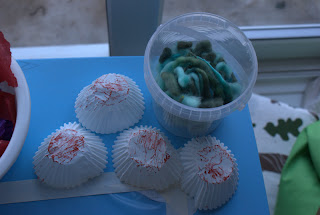 Bits of wool off cuts and cup cake cases; 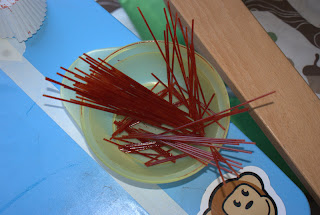 Broken spaghetti dyed red with food colouring (This was a bit of a mistake - I failed to find any surgical spirit in the cupboard (which you mix with the food colouring to help it take to the pasta and dry afterwards) so I just put a load of food colouring in the bag with the spaghetti. This coated the spaghetti but the stuff never dried - seriously 4 days on and it was still wet and coming off on my fingers). So on day one Goblin came down from his nap and ignored the table for most of the afternoon. Then he eventually discovered the cupcake cases and took them to use in a game he was playing with his tractor! 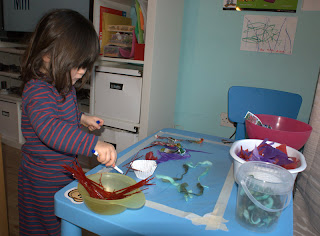 On day two he was a bit more interested and stuck some bits and bobs to the plastic. He also found a pen and drew on the plastic. He didn't really go to town like I thought he would. I guess maybe he just wasn't in the right mood. When he'd finished I stuck another piece of plastic over the top to seal it together. The finished article was quite hard to photograph because its quite see through. But it looks very pretty - You'll just have to take my word for it!

Posted by The Monko at 22:15
Email ThisBlogThis!Share to TwitterShare to FacebookShare to Pinterest
Labels: 27 months, fine motor skills, toddler craft and painting