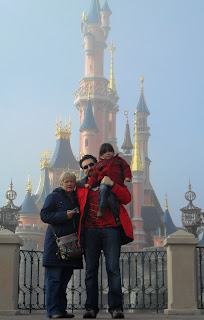 Ok, this was a bit more than an outing. For my birthday and Hublet's birthday, which both fall in January, Nanny paid for us all to go to Disneyland Paris - for which many thanks Nanny.

It was four days of AWESOME!
And Goblin enjoyed it too.

Disneyland is quite full on, and if we had a toddler who was very routine based I imagine four days of Disney could really mess them up. Fortunately Goblin is quite used to having random eating and napping times coupled with lots of visual and sound stimulation - no badge for peaceful cyclical parenting in this house. I was quite surprised to discover that at 93cm Goblin was tall enough to go on most of the rides. Having said that some of the rides were designed to be pretty scary (Pinnochio, Snow White and the seven dwarfs, the Haunted House and Pirates of the Caribbean). Goblin didn't seem to realise he was supposed to be scared though, he was too excited by the trains, boats ond other carriage forms the rides took. The ride went on most was 'Its a Small World'. This is a very sedate boat ride through a world of dolls dressed as people from different countries. Every time we went on this ride Goblin got more and more animated, pointing out different things he'd spotted.There are buses going over bridges and monkeys hanging from vines, and birds pecking Hippos. If you can get over the horrendous stereotyping of different nations and the music that sounds like its trying to brainwash you, its a cute ride for toddlers and adults.
Another favourite with Goblin was the dumbo ride. Despite the fact it goes up really high, he absolutely loved it. He even treated the queuing as part of the ride - in fact as long as he could see something interesting (like a ride) queuing was not an issue for Goblin.
A similar ride in the Disney Studios part of Disneyland was the magic carpet ride. On both rides there is a little joystick that controls the height of the carriage. Goblin insisted on taking all carriages to maximum height. Poor Hublet suffers from vertigo so he was being quite brave in the photo below. 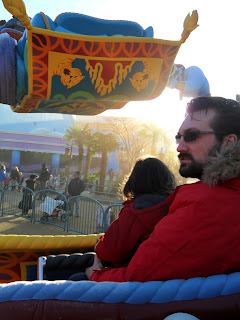 Goblin's all time favourite ride was the teacup ride. Every time we saw it, he ran towards it. There never seemed to be a big queue which was just as well because Goblin decided which coloured cup he was going on every time and would probably have fought anyone who got in 'his' cup.
It wasn't just Goblin that liked this ride. Hublet was very amused by turning the wheel in the cup to make it spin really fast. Goblin and Hublet both really liked spinning fast - I did not! 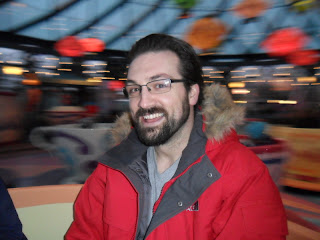 One great thing about Disneyland is the attention to detail. As well as the rides there are lots of things to look at, play on and touch. This is great for toddlers. Goblin was just as entertained playing on the old fashioned cars as he was going on the rides. And he loved looking out for the giant balloon on the lake every morning as we came into the park. 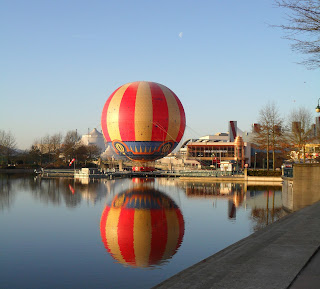 There are some really lovely things to look out for in the park. All the lighting is themed to match the ride or area you are in. They have actual gas lighting in the old fashioned shopping arcades, and I love the lanterns at the teacup ride. And check out the beautiful waterfall beneath the dumbo ride. The floats at the daily Disney parade are also really impressive. Goblin was enthralled. 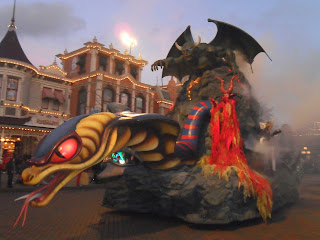 The only thing that managed to freak Goblin out was an animatronic dragon in a cave under the princess palace in the middle of the park. It is very life like, and big, and it roars and moves its head. Goblin was really scared and buried his head in Hublet's jacket until we were far away from it.
Talking of jackets, it is great to go to Disneyland Paris in the winter because it is off peak and therefore much cheaper. But when we went it was really cold. There was ice on the handrails of some of the rides. You are outside all day long, so warm clothes are an absolute must. Goblin wore a vest, longsleeved tshirt, jeans and fleece jumper underneath fleece lined waterproof dungarees, his anorak, his fur hat, and gloves. And on the last day we also bought a fleece blanket because it got even colder. Being in the cold and having so much to look at and take in, and so many opportunities to run around leads to tired toddlers. On most days we headed back to the hotel for an afternoon nap, but on the last day we had to check out in the morning. Fortunately our fold up buggy reclines so we just found a warm restaurant to sit in while Goblin slept. In fact Nanny volunteered to Goblin sit and Hublet and I took the opportunity to go on Space mountain. I'd forgotten how much I love fast rollercoasters.
We stayed at Cheyenne Hotel which is about a mile walk from the park entrance along a canal (that has no railings so is not great for letting toddlers run free). There is a bus that takes you to the park but we needed some exercise to balance out our atrocious diet while we were there. 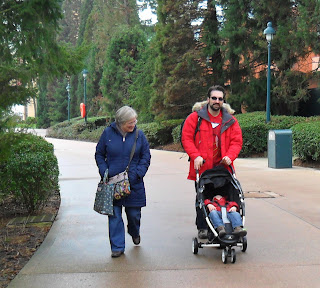 The hotel is designed like a wild west village and all the rooms are cowboy themed. The place is huge and Goblin was quite entertained just wandering round the Hotel complex. It does have a little outdoor kids play area but Goblin never used it because the slopes and stairs and walkways were entertaining enough. We got adjoining rooms with Nanny so when Goblin went to bed we could go and watch TV with  Nanny, with the internal door a little ajar so we could hear him but not disturb him.
They provided us with a baby travel cot but there were also bunkbeds in the room. Goblin discovered the ladder within seconds of entering the room, and spent a lot of the evenings climbing up and down the beds. He only fell off the ladder once! 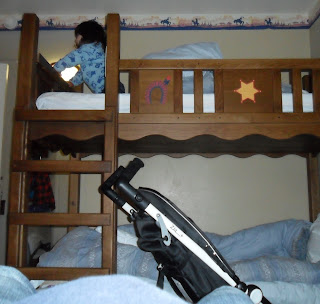 One of the main 'issues' with toddlers at Disneyland is where to eat. Goblin just doesn't do sitting still to eat, let alone sitting still once he's finished so that the adults can eat their meals. Breakfast wasn't too bad. They have a buffet in the hotel and you can grab what you want. Goblin managed to entertain himself trying to butter toast and croissants while we ate. His independent buttering was my only nod towards something educational for the whole weekend.
Evening meals were more of an issue because he was usually overtired and ratty. On one occasion when he was really playing up Hublet took him for a little walk while Nanny and I ate. There was a shop attached to the restaurant and when he returned Goblin had a toy. Possibly the most inappropriate toy for a two year old - a retractable knife. It made me laugh a lot. Goblin loved it, he entertained himself for the rest of the meal by stabbing himself in the chest! 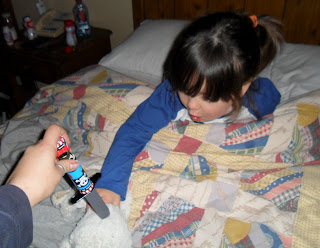 As well as loads of rides, Disney has loads and loads of shops. Goblin seemed to like looking at stuff in the shops just as much as going on the rides. He was relatively sanguine when at the end of each shop visit we put back what ever he'd been playing with and left the shop. The one time he did go a bit mental was when he found big round bags full of cars. He grabbed two bags and ran around the shop saying "find the lady, find the lady" - when I buy him things I always say "we need to give them to the lady/man so they can scan the barcode". When we said we weren't going to buy them, and tried to get him to put them back he was not amused. After four days of going into Disneyland shops I'd been sucked in by the consumer bug and bought Goblin a soft toy turtle, some fingerless gloves, a fleece blanket with Cars on it, and a long sleeved disney t-shirt. I think Goblin was actually more restrained than I was.
Our final challenge was the three hour journey back to London on the Eurostar. Goblin had a massive mid-afternoon sleep in the buggy on the last day, so any hope of him falling asleep on the train vanished. But fortunately we had Hublet's Ipad well stocked with Disney films and Mr Tumble. We also had a great app called Zoo Train which Goblin played for ages. Here is a YouTube demo of it.
And Goblin also spent quite a bit of time opening the automatic door next to Nanny's seat and hanging from the parcel shelf like a monkey. Believe it or not, despite these activities I still think he was one of the better behaved kids in the carriage - but then I am biased. 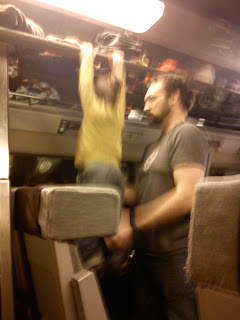 If you are thinking of visiting Disneyland Paris and you'd like a users perspective on the facilities that isn't covered in this post please ask a question in the comments.

Posted by The Monko at 21:41
Email ThisBlogThis!Share to TwitterShare to FacebookShare to Pinterest
Labels: 27 months, outdoor play, outings