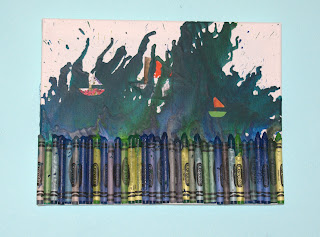 I'm sure if you have looked at more than one kid based blog you have probably already seen the ubiquitous crayon melt painting. Well now it is my turn.
I have been wanting to do this with Goblin for ages but I didn't now how toddler friendly it was. Of the various posts I have read on the topic I couldn't gauge how long it would take for the crayons to melt and I didn't want to start an activity with Goblin only to discover they took hours to melt - Goblin would simply get bored and walk away and I'd end up doing it alone. So I decided to do a test run first. 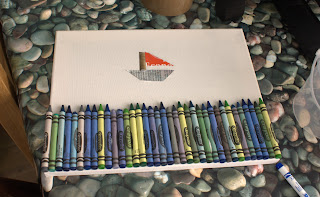 I decided to do a seascape. I bought three packs of 24 crayons and took out all the blus and greens and a few greys as well. (I got the packs in Tesco and they were less than £1 each - and I still have all the reds, pinks and yellows left to play with). I stuck them to one of my 4 budget canvases using PVA glue. I was going to use a glue gun but then realised it would be a bit stupid to glue the crayons using glue that melts rather than hardens when it gets warm. I also stuck a magazine cut out of a boat onto the canvas. The idea was to make waves that would surround the boat. 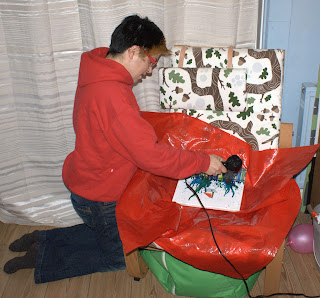 I borrowed my Mother-in-law's hairdryer because ours is an eco hairdryer so it doesn't actually get hot.  I was amazed how fast the crayons melted. Within less than a minute there were splashes coming off the first ones and the whole thing took less that ten minutes. 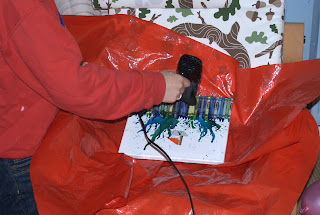 I was very glad I put down a plastic mat because the crayons did splash quite a lot and I imagine they would be really difficult to get out of pretty much any other material.

The boat got a bit buried because once the crayons started melting they ran too quickly to control, so I stuck a couple of extra boats on after the picture had dried (which was super fast again, about two minutes).
If I was going to do a seascape again I think I might paint the canvas pale blue of grey to show stormy skies. But now I have red, yellow, orange and pink crayons to use with Goblin. Any ideas?

Although its been done many times before I thought I'd still share this on a few linkups.

Posted by The Monko at 20:44
Email ThisBlogThis!Share to TwitterShare to FacebookShare to Pinterest
Labels: 27 months, Mummy's crafts, toddler craft and painting