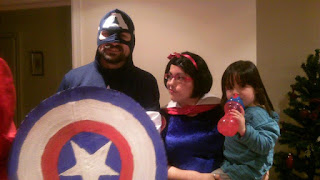 I don't make new years resolutions. Its one more thing to feel guilty about half way through January when you have failed to keep what ever resolution you made. Having said that I have been thinking that I need to be more 'present' in play with Goblin. That is to say, rather than sitting back and watching him play with his toys (or worse watching TV or reading Facebook while he plays with his toys) I need to spend more time getting down on the floor and engaging in whatever he is playing, whether its lining up cars, make-believe with his dolls or moving plastic animals around the room. 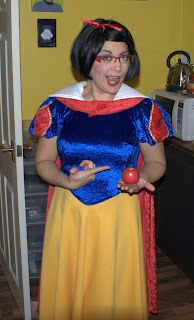 So you would think that I should make a start with my good intentions on new years day. However last night we went to a fancy dress New Year's eve party, stayed up until 2am and then Goblin woke at 6.30am. Four and a half hours sleep is not a good foundation if you are trying to start the year as you mean to go on. At least I didn't have a hangover.
As a quick aside, Hublet and I stopped drinking when Goblin came along. But we both still really enjoy the taste of wine. We have found a great website in the UK called Alcoholfree.co.uk. If you are pregnant, breastfeeding, a designated driver or like Hublet and I just not drinking booze but still fancy the idea of a glass of faux wine, you should check out the Bonne Nouvelle red and white wines on this site. They are the closest I have found to the real thing in an alcohol free version. We had their alcohol free champagne last night too.
So with only four and a half hours of sleep under my belt I have to confess a large part of the day was taken up actively encouraging Goblin to watch TV and clips on Youtube. Not that he needs much encouragement to do the latter. He is obsessed with watching clips of diggers, bin lorries, tractors and combine harvesters, and listening to "the wheels on the bus" and a lovely song "big blue sea" (above) that he also gets me to sing (Its the only song he allows me to sing - any other song I attempt, he tells me to stop - I am quite tuneless). 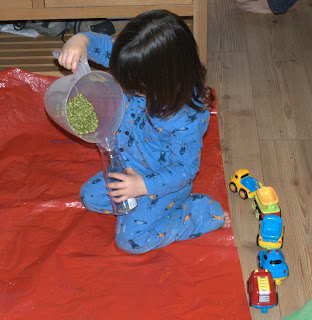 But eventually both he and I got bored of Youtube and I broke out some of his pouring equipment. This now includes a funky vinaigrette bottle with top that I pinched from Hublet's Christmas acquisitions. The bottle has quite a narrow neck and Goblin struggled to poor split peas into it. They went all over the mat I'd put down. But I was really pleased when Goblin went off and got his brush and dustpan without promoting. He did quite a good job of sweeping up the peas and pouring them from the pan into the big jug. His previous attempts at using the brush and dust pan haven't been great. There have been a few things recently that Goblin seems to have suddenly got the hang of - I'm wondering if its an age thing. 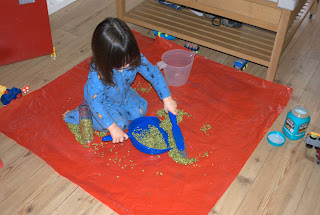 After sweeping and pouring for a while longer Goblin decided to pour all the peas out onto the mat. He then lay in them moving them around with his hands and feet and telling me he was a snail. I was delighted that he was getting such a great sensory experience from what had started as such a simple exercise. But there was a small screeching voice in the back of my head which kept saying "the peas are going everywhere". I'm really not a neat freak so it always surprises me that I get uncomfortable with the idea of dried lentils, peas or rice being spread over the floor. For Goblin's sake I really try and ignore my little voice. 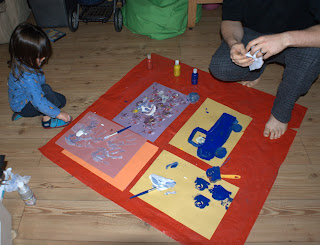 My little screeching voice paid another visit when Goblin decided to do some painting. At the moment "painting" seems to consist of squeezing far to much paint onto paper, and then getting a new colour of paint and doing it again. Luckily Hublet was on hand. Having two adults assisting in a messy activity always makes it less stressful - one can grab and clean the toddler while the other grabs and cleans the equipment. 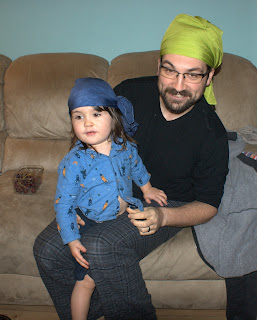 We also played with some play silks that I dyed and hemmed myself. Goblin and Hublet pretended to be pirates. Goblin knows that pirates say "Aaaar". And it amuses Hublet and I no end when he does it. 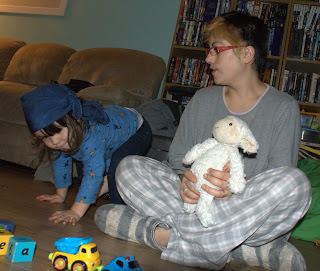 Our final activity of the day was some brick stacking with his best friend Lamby. I'm going to write that up as a separate post because I think there are lots of valuable things about that game that need a post of their own.
You will spot from the photos that the entire day was pent in pyjamas, as I said earlier - start the year as you mean to go on!