Goblin's exhibition of independence through art.

(Goblin is 26 months)
This evening Goblin decided to do some art. It started with his usual demand that one of us draw him a vehicle - this week he's asking for garbage trucks. He has been watching them on Youtube as well. 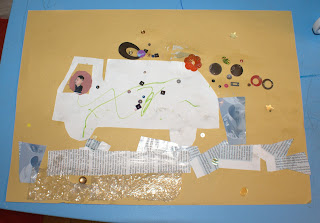 Hublet decided rather than drawing one he'd cut one out. Goblin was impressed and started colouring it in. But when he came to draw a man in the window he went straight onto the table. So I got him a big piece of paper and a glue stick. He put glue on the back of the lorry and we stuck it to the paper.
Goblin really liked the glue stick and kept asking for more things to glue. The Economist magazine was lying nearby so Hublet and I cut it up to make a road, a bin and Kim Jong-un to drive the truck. I gave Goblin some sequins to use as 'rubbish'. As you can see from the picture this garbage truck isn't very good at containing the rubbish.
Having finished gluing Goblin decided he wanted to paint. And this is where his exhibition of independence started. First he fetched the painting mat. He started to put it on the floor and when he got stuck he turned to me and said "help please" (Goblin's a relatively late talker and that's quite a long sentence for him so you can understand why I'm thinking this is quite impressive).
Then he chose the paint he wanted from the box and he chose a sponge as his painting equipment. Unprompted by me he then sat and painted. I just sat back and watched - and took photos. 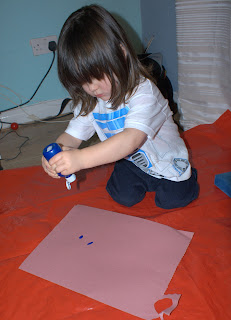 He dripped the paint from the paint squeezy bottles, and used the sponge to dab it around.
It started to look really lovely.  Then Goblin decided to add more colours. He had a plastic zip lock bag containing some finger paint and three squeezy paint bottles, so he helped himself. 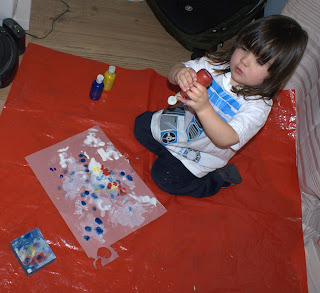 This was a print I took from his sponge. I think its quite pretty. 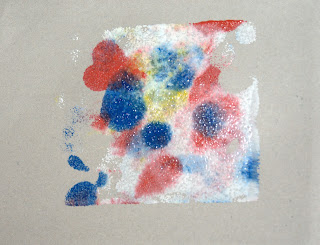 Personally I would have stopped there, but this was not my art project. Goblin seemed to have a clear idea of what he was doing. He decided it needed more colours and pulled out the finger paints and a brush. Then he said he wanted to add the garbage truck from his previous picture. I started to cut it out for him but he said "my turn". He interchanges between using "my turn" and using "Goblin's turn" but both are new phrases in his developing speech this week so I am excited by both.
I gave Goblin the scissors.  Hublet was looking on line for some pinking shears for me for Christmas. He discovered that if you search under the words 'pinking shears' they cost a fortune but if you put in 'craft scissors' you get very cheap ones. So he bought me (and Goblin) a set of 8 craft scissors with different wiggley edges. 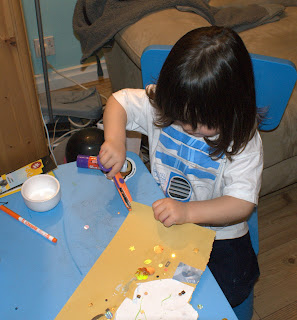 Goblin had fun cutting the edges of the paper. He is surprisingly good at using the scissors and doesn't seem to have any problem holding them or opening them (I think it helps that his hands are quite big for a two year old). My main concern is that he sometimes holds the paper in one hand and cuts with the other not looking where his fingers are, but I guess after he closes the scissors on his fingers a few times he'll stop doing that. I don't think he can do himself any serious damage with these scissors, they aren't that sharp. I experimented on myself and didn't manage to draw blood. I do only let him use them under supervision because he has a really unfortunate tendency of sticking things in his mouth and going for a run - I can just imagine having to explain how craft scissors got lodged in my child's throat. (For any of you "The Mary Whitehouse Experience" fans out there that sentence should be read with a Scottish accent).
Goblin glued his truck onto his paint using his new found gluing skills. And he added some extra paint for good measure. And here is his mini masterpiece. 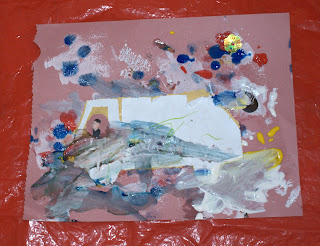 And just to top it off, when he'd decided he'd finished he asked for a wipe and cleaned himself up. 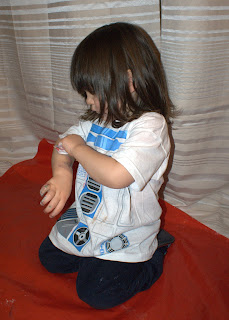 I'm also linking this to