(Goblin is 25 months)
Goblin has a heavy cold and his concentration span has not been great this week. So we've spent a lot of time outdoors focussing on gross motor skills (and having fun).
So what has he been working on? 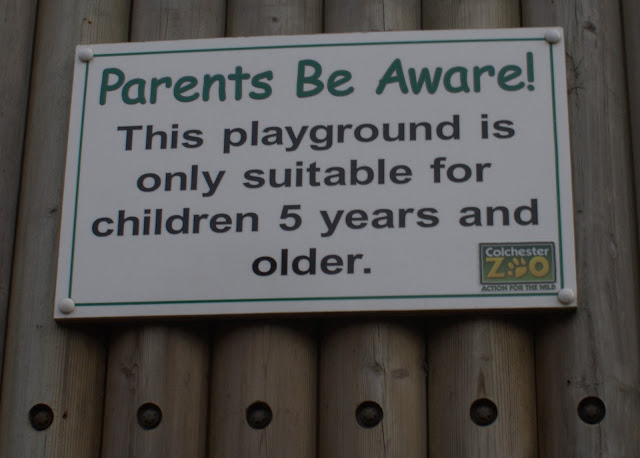 1. Climbing - Today he made me laugh because he insisted on playing on a play set that was for over 5s. My instinct was to let him try.  As long as he can get himself up on the equipment unassisted why shouldn't he play on it - even at the age of 2 he has enough smarts not to launch himself off platforms that are 6 feet in the air. 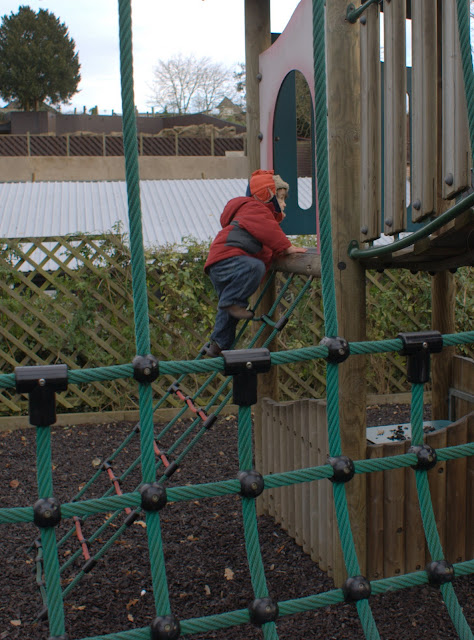 2. Hanging - He loved to swing off bars and pretend he's a monkey. He makes the 'oo oo' monkey noises.  He's always been a bit of a risk taker and Hublet and I definitely encourage that. I think it helps with independence. 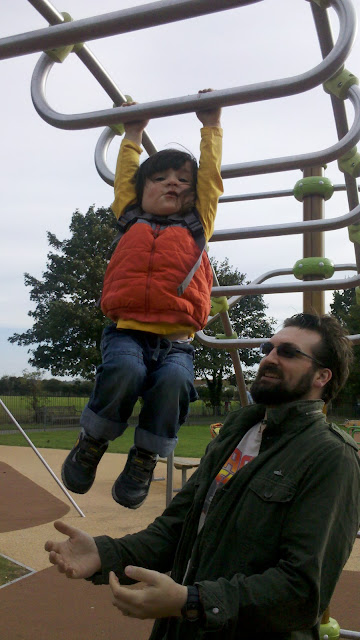 3. Running - he still looks like he will trip over at any second when he runs, but he is falling over less and less. And he's getting worryingly fast - I may have to start practicing my sprinting. 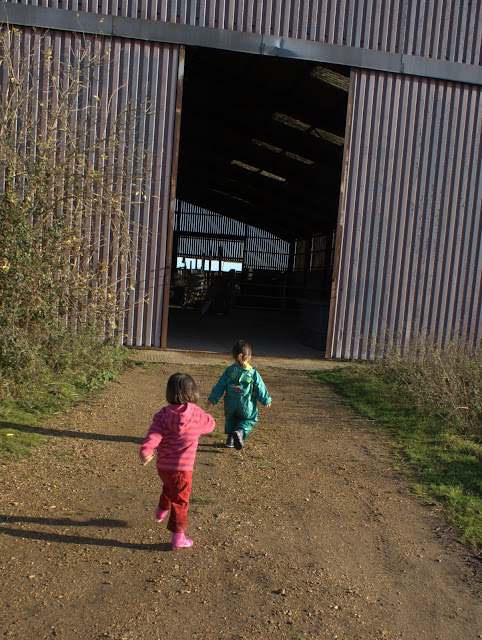 3a. Running on wobbly surfaces - the first time he ran over this bridge he fell off the edge into a big prickly bush. But it hasn't deterred him. He loves pelting across it at top speed. Getting a few bumps and scrapes and learning to pick yourself up and carry on can only be a good thing. Not that we aren't close at hand to give a cuddle if he really hurts himself. 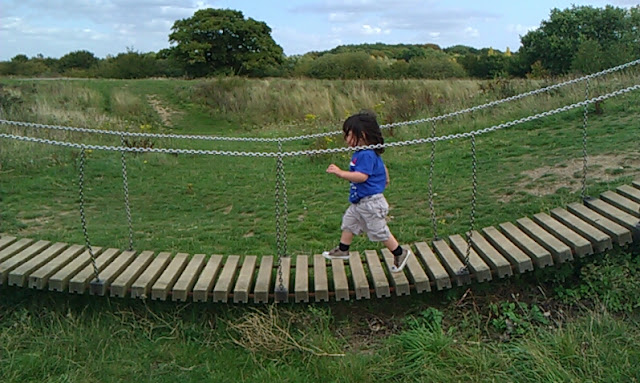 4. Jumping - we had to teach Goblin how to jump. It took him a while to get it. He'd bend his knees and make noises but not actually leave the ground. Then he got to the point where he'd leave the ground but fall on his bum. But now he's really good at jumping. We still need to work on perspective though as he often jumps to try and catch aeroplanes! 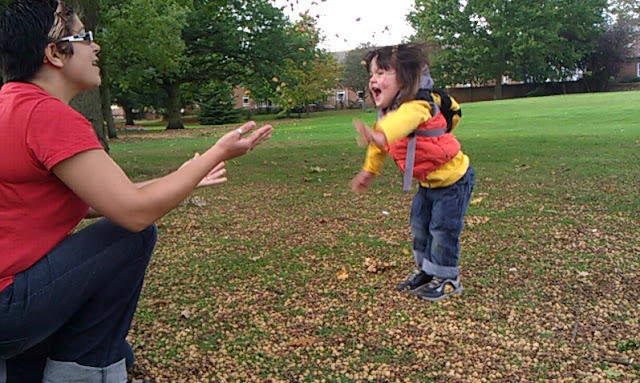 5. Scooting - Goblin got a toy tractor from his Granny and Grandpa for his birthday and he plays on it every day scooting around the room. He sometimes takes it into the garden and hurtles at top speed down the sloping concrete path into the kitchen door. 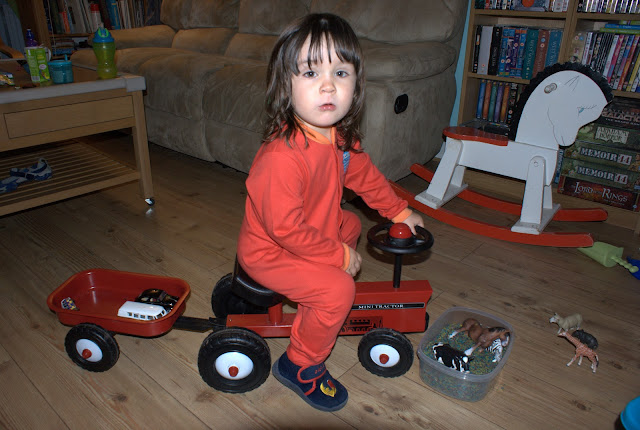 6. Pedalling - Goblin's Poppy and Nanny bought him a trike to keep at their house. This is an old photo of Poppy pushing him when he was smaller. This weekend he discovered he could pedal it himself. As long as he's had a little push to get him started he can pedal it on smooth ground. He spent about an hour getting me and his Uncle to push him back and forth across the kitchen floor so he could practice pedalling - not sure about the steering aspect though. 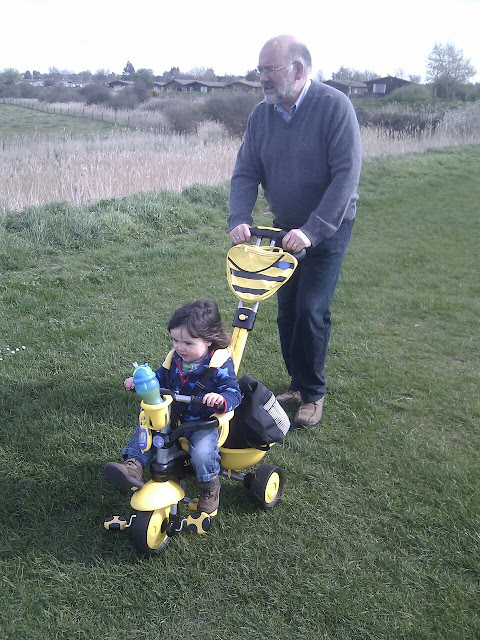 We were so excited by his new gross motor skill that we searched ebay and got him his own (cheap) trike. Unfortunately its slightly too big for him at the moment. But he can still scoot it along as he demonstrated for two hours this evening. 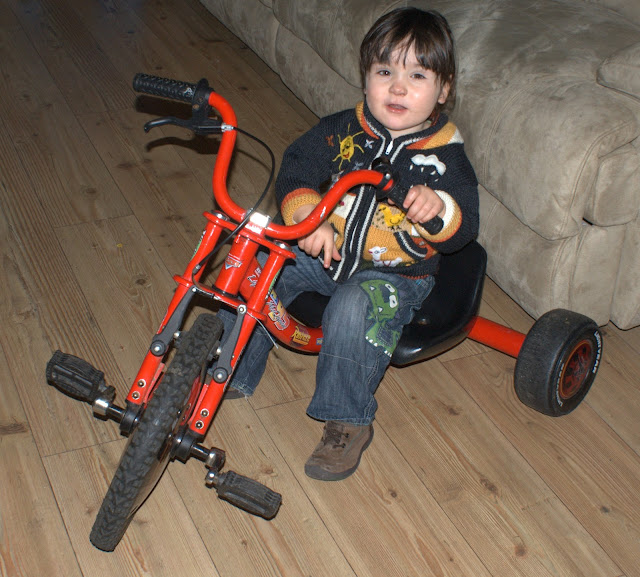 And the best thing is he looks like the kid from 'The Shining' who cycles the hotel corridors on his easy rider trike. Hopefully when he's feeling a bit more up to it we'll get back to another of his favourite gross motor activities - swimming.

I'm linking this to Montessori Monday. Its not strickly montessori activities but Montessori theory does encourage gross motor activities so I hope it fits enough with the theme.