Y is for Yummy Yoghurt

(Goblin is 25 months)
I enjoyed doing Z with Goblin so much yesterday that I thought I'd give Y a try today. We didn't have much time to play because we were out most of the day. And to top it off my printer packed up so I couldn't print off the lovely printables we had yesterday. But we managed to do 'an art'. 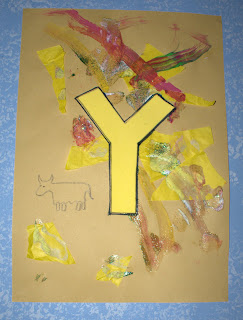 Obviously I was focussing on Y is for Yellow. We stuck this next to the Z half way up the stairs. I was really impressed that Goblin remembered the letter Z sound when I took him up for his nappy change. And he made me stop on the way back down to have a little look at his handy work. 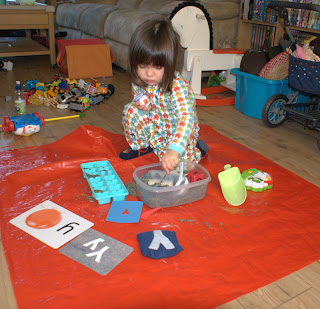 I laid out his Y flash cards and bean bag and buried some Y stuff in his rainbow rice. He uncovered a Y cube, a Yak, two Y fridge magnets, the Y for his Leapfrog alphabet toy and a yoghurt. He was very excited at finding the yoghurt and held onto it while he used a teaspoon to spoon rice into an ice cube tray. Then he decided he was going to eat the yoghurt. I thought for sure that would be the end of the rainbow rice - I had visions of him pulling the lid off and upending the yoghurt into the rice tray. But I was pleasantly surprised when he took the yoghurt to the table, ate the whole thing and asked for another. 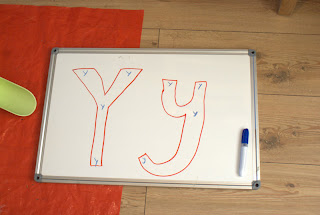 As we didn't have any printables to play with I drew an upper and lower case Y on our white board. But Goblin was too into eating yoghurt by that point and wasn't interested. Later in the day he decided that the  white board letters constituted mess and 'swept' them with his broom.

Posted by The Monko at 22:37
Email ThisBlogThis!Share to TwitterShare to FacebookShare to Pinterest
Labels: 25 months, letters, painting, rainbow rice