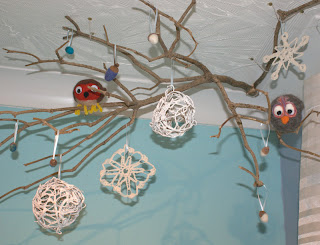 I finally changed out my Autumn tree decorations for Winter ones. As well as a needle felt owl, I added a needle felt robin. I was going to make a sensible looking one but Hublet had bought a pack of googley eyes and insisted that the robin had some. I used yellow pipe cleaners to make feet - Hublet said it looked like a spider robin when I first made it, but once the feet were wrapped around a branch they looked fine (ish). 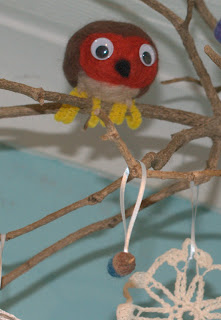 Goblin is convinced they are both owls. He keeps pointing at them both and saying owls. I say  "no, one owl and one robin" but to be honest it does look quite owly. 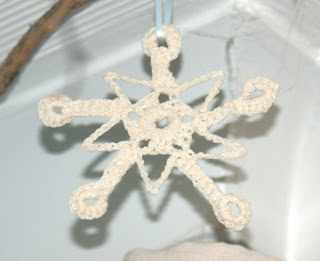 I also added two crocheted snowflakes. Nanny (my mother-in-law) spent half an hour on Monday evening showing me how to crochet. I couldn't believe how much you could do once you knew a couple of stitches. I made up the pattern for my two snowflakes because I'm still not too good at reading the complicated pattern instructions with all the funny abbreviations. (You can tell I made it up because I ended up with a 5 pointed star which of course is impossible in nature so would never be a snowflake pattern - doh!). But I have found a good website for free UK crochet patterns and I'm currently attempting my first snowflake from a pattern. If you can follow patterns check out these. http://www.coatscrafts.co.uk/Crochet/Projects/snowflake_tree_decoration.htm
(Note: UK crochet uses the same abbreviations as the USA but they mean different things so pay attention to where your downloaded pattern comes from.) 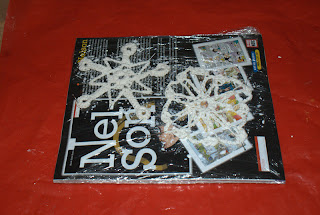 I also searched the blogosphere for a good way to stiffen the crocheted snowflakes and discovered that most people recommend a mix of PVA and water (50:50). I wrapped a magazine in clingfilm and pinned the flakes out how I wanted them to look when they dried. Then painted the mix on with a paintbrush. I left them overnight and the next morning they were nice and solid. 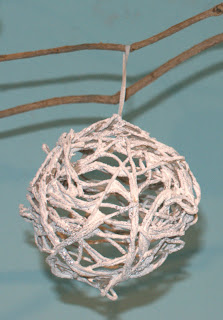 My sparkly snowballs were inspired by glow in the dark spiders webs from All Artful. I made mine much smaller using normal sized balloons but only blowing them up a tiny bit. Goblin liked playing with them. He wasn't so keen on touching the string once I'd dropped it in the PVA glue, so I ended up doing most of this project myself. I used proper garden string but I would suggest using wool instead. The string is quite heavy and therefore more difficult to get to stay on the balloon. 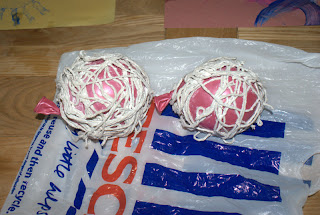 The up side being once its dried its pretty indestructible and I was able to pop and peel away the balloons no problem at all. Another down side was that the string lost its whiteness due to over gluing. So I rolled the balls in white paint and then in glitter. I think the finished articles are quite cute and catch the light really well. 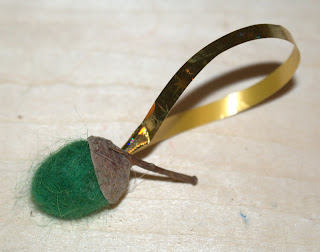 My final addition were some white felt acorns. I have posted a tutorial on how to make them  here. 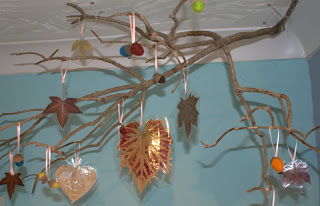 So there you have it, Autumn to Winter