Trip to the Park

(Goblin is 25 Months old)
This afternoon Goblin and I went for a walk with Bubble and Squeak and their mums. Goblin has really started enjoying the company of other toddlers and he was excited to see the boys. I decided not to take the buggy so just had Goblin on reigns which was nice as it gave me more freedom to take some photos. 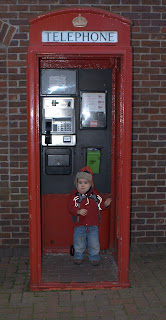 The boys discovered two old fashioned red telephone boxes in town. I swear I must have walked past these things a hundred times and it never occurred to me that they are quite a big deal as there aren't that many still in existence. It took us a while to prize the boys away from the phone boxes and get to the park - it was late in the afternoon and we were worried it might get dark before we got there. We needn't have worried, once the boys got to the park and had a bit of freedom they set off at a pace. I tried to run ahead to get some photos and they kept catching up with me. 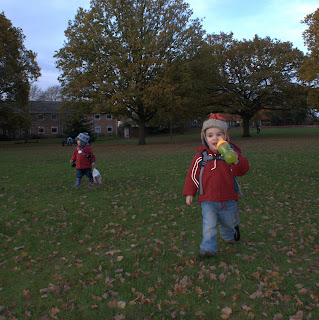 Well when I say 'the boys' I mean Bubble and Goblin. Squeak was being more restrained and chose to hang out with the mums. 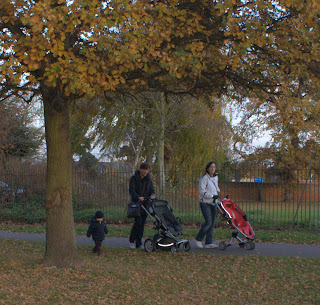 He did join in eventually, but he was a bit far behind. When we got to the park we discovered a dilema. What do you do when you have three toddlers all wanting to go on  the swings and you only have two swings. Are tears an inevitability? 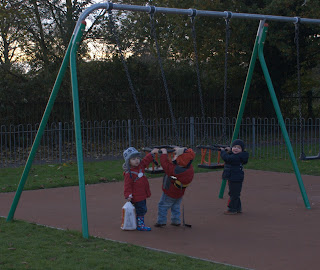 Apparently not. I may have mentioned that I took an idea from Lawrence Cohen's Playful Parenting book: When Goblin and I are playing on the swings I pretend that he has kicked me and I fall to the ground or fly off to one side when his feet make 'contact'. Goblin calls this 'ponking' (the word comes from "in the Night Garden" when the Pinkponk hits the trees with a ponk). So I used a variation of this game. Goblin and Bubble took turns on the swing. The one who wasn't on the swing got to push the one who was, and they pushed from the front with me helping. When the one in the swing was going high enough I'd pretend that the one on the ground was getting ponked (kicked) as the swing came towards them. I'd pull them backwards so they flew through the air squealing. Both the boys thought this was hilarious and they weren't actually sure whether it was more fun being in the swing or being 'ponked'.

The boys also played on the other park equipment, including the worst designed slide in the world where the steps up to the slide look more like a slide than the actual slide does. Any one would think they don't want toddlers to go on the slide.  This is the alternative route up which Goblin has only mastered in the last few months. 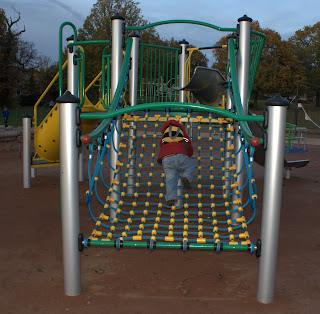 And we did finally get to the duck pond just as it was geting dark. The photo below is of the same duck pond but taken in daylight - it was actually too dark to take a decent shot by the time we were feeding the ducks. 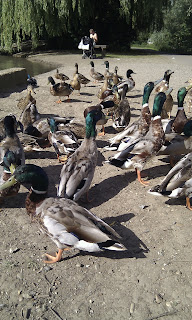 Once the ducks had had their feed we shipped the boys off to Costa Coffee so the mums could get a much deserved latte.

Fresh air and good friends. A lovely way to spend the afternoon.